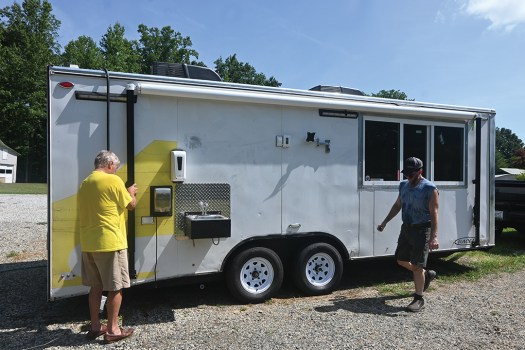 Madeline Wagoner/Salisbury Post — Kevin and Russell Swicegood have been transforming a trailer into a mobile food unit to serve Swicegood Barbecue both locally and outside of the county. 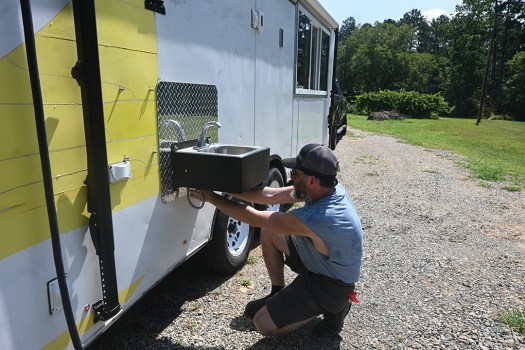 Madeline Wagoner/Salisbury Post — Kevin Swicegood demonstrates how to install the detachable sink for customers, attached at the front of the mobile unit. 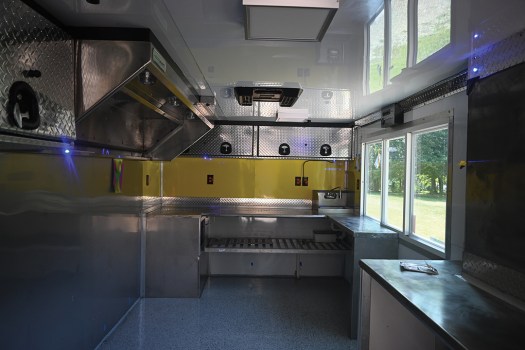 Madeline Wagoner/Salisbury Post — Inside the trailer, truck cabinets offer handy storage at the front with a handwashing sink for workers underneath, a serving window to the right and a dishwasher and three-base sink going towards the back (not shown). 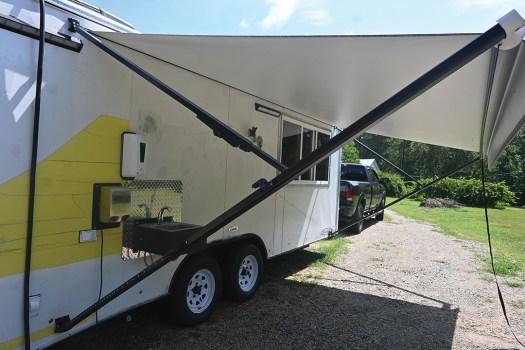 SALISBURY — A barbecue pitmaster prodigy, known for his traditional slow-cooked meats, has been preparing to open a food truck featuring his signature recipes.

Kevin Swicegood has been blueprinting, constructing and fusing metals for the past year to move his barbecue business forward by hitting the road. He works full-time at Granges Aluminum in Salisbury but after getting hit by car in 2021, he decided to apply himself for the six months he had to take off from his shifts to jumpstart a dream project — a BBQ food truck.

“I did a lot of work under the trailer when I was in a wheelchair,” he explained. “I would lay on my back and roll myself under there, it’s the only thing I could do.”

The mobile unit has two layers of plywood secured with rubber to give the trailer a solid foundation. Most of the truck’s workings were hand-cut and assembled by Swicegood himself. According to him, the option was more affordable than purchasing from a third party.

For storage, Swicegood turned to his creative side for an industrial-like touch to the interior. Two truck cabinets were installed at the front of the trailer that allow the lids to be secured to the ceiling when opened. It was also important to Swicegood to keep cool while preparing each dish, so he installed two air conditioning units on the roof of the mobile unit.

“He’s put hundreds of hours into this project,” said Russel Swicegood, the pitmaster’s father who has lent a helping hand throughout the process. “If he’s not doing it, he’s working at his job and feeding local racing teams and doing some catering.”

If he is not hooked up to his workshop to provide electricity for the truck, he uses a generator to regulate and test each piece of equipment that is installed. When it is not on his property, the generator will sit atop the trailer to reduce the noise from it and prevent breathing in harmful fumes.

A unique feature he included in the food truck is a motion-activated detachable sink that goes on the outside next to the serving window. Hot and cold water flow through the pipes like a regular indoor sink and a hands-free soap dispenser and hand drier also attach to the side for an adequate hand-washing station for customers. The worker’s hand washing sink is to the left of the serving window inside.

Swicegood had to get creative when finding the proper layout for the portable barbecue grill. He took sheets of cardboard with duct tape and sculpted them into the shapes of sinks, ovens and shelving to make sure the workflow could run smoothly. At least 1,500 pounds of steel support the walls of the trailer, making it solid, bulletproof and insulated. The inside of the mobile unit contains a practical layout for cooking and cleaning, including a shower, dishwasher, ice maker, three-base sink for washing, rinsing and sanitizing dishes and a tank that can hold 90 gallons of fresh water. An additional water tank for the sinks is installed in the front fender that can hold 1,110 pounds of water, or 131 gallons. Each tank has a filter installed and a propane tank  water heater can heat the water up to 180 degrees.

Swicegood is still anticipating installing kitchen equipment, but he is waiting for approval of a mobile food unit permit to open the trailer for business. When the time comes, 1,100 pounds of machinery, including a stereo, refrigerators and fryers, will be installed across from the serving window and sinks to balance the weight of the water tank in the front fender. The water used inside will drain out the back of the truck and Swicegood is preparing to obtain a septic permit so he can unload at his home.

He has submitted his application for a mobile food unit permit, but there has been some pushback due to his business not meeting all the requirements outlined in the list by the N.C. Department of Health and Human Services. Because Swicegood runs a catering business under an outdoor awning on his property, he does not have a commissary kitchen as outlined on the regulations.

“They want a brick-and-mortar restaurant,” he said. “I’m looking at renting a commissary kitchen in either Concord or here in Salisbury, but it isn’t looking practical right now.”

Swicegood admitted he should have done more research before devoting an extensive amount of time and funds unto the trailer, but he will continue to work with the Rowan County Health Department to see his vision fully come to life. For now, he said the outcome this far has met his expectations.