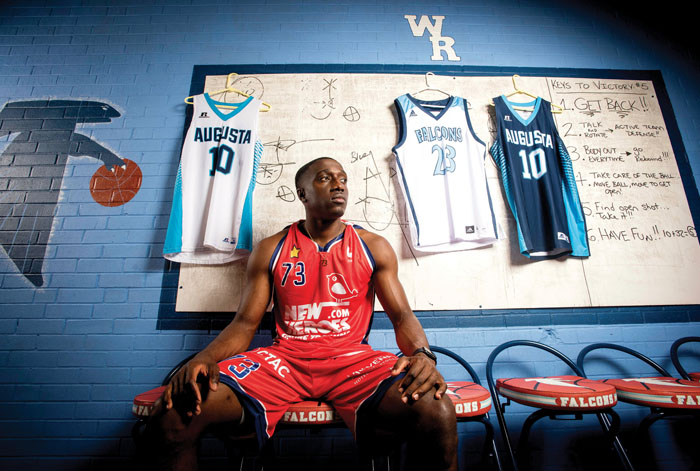 For a 5-foot-9, 160-pound guy from Cleveland, N.C., to be seeing the world and playing a sixth season of pro ball means beating long odds.

You don’t have to tell Sherrill that he’s blessed. He appreciates every day he gets to play ball for a living. That was his dream from the time he was 8 years old. He still doesn’t take a single day of hoops for granted.

“Two seasons in the Netherlands, then three in Turkey, and now it’s Italy,” Sherrill said. “I’m very excited and a little nervous about doing something new.”

Socially, he figures it will be easier in Italy than in Turkey.

“Maybe one out of 100 people in Turkey spoke English, so just doing something like ordering food wasn’t routine,” Sherrill said. “That was a culture shock for me after playing in the Netherlands, where the majority of the people spoke English. I lived a pretty simple life in Turkey. I hung out with my teammates, went out to eat with them or watched TV. Turkey was good to me, but I think Italy will have some advantages.”

In the offseason, Sherrill continues to work at his craft. Three or four times a week this summer, he went through two workouts — one for basketball skills and one for overall conditioning.

“I guess I’m that old vet now,” Sherrill said with a laugh. “When I was in high school and college, I could just stretch a little bit and go out and play. Now I go home and ice the knees after every game. No injuries yet, but it’s smart to take precautions to prevent injuries.”

Pro teams in Europe are often limited to two foreign players (usually Americans), so the fans of every team Sherrill has played for have initially been appalled that their hyped American import was a little guy.

But he’s always won them over after the first five minutes. He is really team-oriented, really quick and really explosive. He even has a few dunks to his credit.

“The size factor, well, that’s been there my entire life,” Sherrill said. “But once I show the fans how well I can play, they start liking me a lot more.”

Sherrill is automatic at the foul line and you can always count on him for a solid 37% from the 3-point line.

He played in the top league in Turkey, but he’ll be playing for a team in the upcoming season — APU Udine — that competes in the second tier of basketball-crazy Italy’s many levels.

The competition in Turkey was good, but the skill level will be higher in Italy.

“Guys tell me that the second league (Serie A2) in Italy will be tougher than the best league in Turkey,” Sherrill said. “That’s a challenge I’m going to embrace.”

Sherrill will have more scoring help.

He averaged 21.7 points and 4.3 assists while playing in the Turkish capital of Ankara in 2021-22. The Americans normally split the scoring burden, but Sherrill’s teammate from the USA was Joel James, the 6-foot-11 former UNC center who provided more presence than points. Sherrill had to score big — and answered the bell.

If he doesn’t have to put up huge scoring numbers in Italy, he won’t mind. He’s looking forward to more assists as he teams up with guys with surnames such as Cappelletti, Mussini and Antonetti.

Keshun accounted for 1,907 of those points. The Falcons were 80-34 during his stay. His senior season included Rowan County Player of the Year honors. He went wild on a 41-point night against Carson and dropped 37 on North Rowan.

In college, he blossomed big-time at Division II Augusta, where he enjoyed a dream career playing for coach Dip Metress, Gurley’s college roommate at Belmont Abbey.

He earned a degree, was the school’s Male Athlete of the Year, received All-America recognition and had his jersey retired. He amassed 2,333 points to become the leading scorer not only in Augusta history, but in Peach Belt Conference history.

Augusta played one of those preseason exhibition games against the big boys, and Sherrill lit up Wichita State for 33 points. He scored 22 in the Division II All-Star Game.

Winning seems to follow him around. Sherrill’s Augusta teams were 89-34.

One more thing you need to know about Sherrill is that he has worn the “73” jersey during his pro career.

That’s an offensive lineman’s number, but 73 is significant to him.

“My grandmother, Catherine Carpenter, was 73 years old when she passed in 2012, and she meant a lot to me growing up,” Sherrill said. “Every time I pull on that 73 jersey, I think about her, and I think about how happy she would be about me playing professional basketball. Then I go out and try to make her proud.”

Keshun is proud of his big brother, K.J., a 6-foot-8 post man who played collegiately at Charlotte and Augusta. K.J. is carving out his own lengthy pro career.

K.J. flew back to Germany on Monday to prepare for a new season.

“He’s had some injuries, but he’s kept going, and he’s done well in Germany,” Keshun said. “He loves it there. Beautiful country and nice people. When I was playing in the Netherlands, I could get on a train and go visit him.”

Keshun’s goal is to play at least 10 seasons in Europe. He figures 12 or 13 years will be the max. He wants to retire from hoops before his body starts breaking down from the grind.

Those are long seasons in Europe. There’s a nice break around Christmas, but it’s still a seven-month season if you make the playoffs, and Keshun always expects to push his team into the playoffs.

He knows the ball will stop bouncing one day. He’s thought a lot about that. He’ll be ready when that day arrives.

“After my playing days, I can see myself coaching and working with young people,” Sherrill said. “I was brought up in a family that taught me morals and values, and now I’ve added a lot of playing experience and life experience to that. There’s a lot I can pass on to the younger ones.”