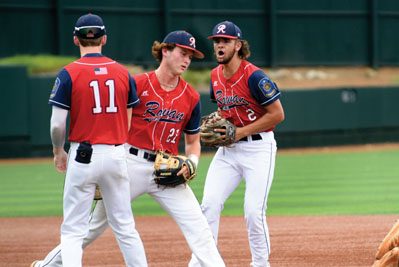 Rowan standouts Luke Graham (2), Blake Hill (21) and Casey Gouge (11) had plenty to celebrate on the field this season. File photo by Wayne Hinshaw, for the Salisbury Post

Wilmington Post 10 has won more titles than any other program in the state and also has been in the finals (21 times) more than anyone.

This was the 22nd single-site state tournament. Wilmington has been invited to the party 15 times, even more than stellar programs such as Rowan County (13) and Cherryville (13).

Rowan fans can be proud of Wednesday’s 5-4 win over Wilmington in pool play. It was Rowan’s only win of the tournament — and Wilmington’s only loss.

More proof that baseball is a strange game.

Rowan (35-10) wasn’t far from advancing out of pool play, but Tuesday’s 5-2 11-inning loss to Pitt County at Campbell University’s Jim Perry Stadium proved too much to overcome.

Officially, Rowan had 14 hits in its three state tournament games. Ten were in that Pitt County game.

Rowan was closing in on victory against Pitt County when lightning was spotted by an umpire in the seventh inning. Then in the eighth, Rowan had every chance to win it, but just didn’t get it done.

Rowan hitters were a cumulative 4-for-39 in the Wilmington game plus Thursday’s 4-1 loss to Queen City that ended the season.  That’s a .103 batting average.

Because of their pitching depth. Wilmington and Queen City, both from Rowan’s four-team pool, were the two finalists on Saturday.

The level of play in the state event was strong, with Legion teams showing power at  the plate and on the mound. There were some no-doubt homers. There were strikeouts that sizzled.

It was encouraging to know that there are still high-80 mph pitchers out there playing Legion baseball. But Rowan didn’t have any luck hitting against them.

The stat that jumped out once all the numbers were compiled was Rowan’s eight errors in three games since usually defense is a major advantage.

What was really remarkable was that all three of Rowan’s opponents were flawless in the field when they played Rowan.

The 35-10 final record for Rowan, plus another Area III championship and another state tournament appearance, were notable achievements.

Rowan didn’t have much of a chance against Queen City’s Joey Ruller, who pitched a one-hitter against them on Thursday, but 10 years from now they’ll look back on this season and smile.

All of them had their moments, but some went above and beyond the call.

Jackson Deal played center field about as well as you can play it.

McCall Henderson showed he’s going to muscle a lot of homers for East Rowan in 2023 and 2024.

Jake Blevins won nine games. One day he can tell his grandchildren he threw a complete game to beat the state champs.

Blake Hill made everyone feel good. He got a chance and shined.  He walloped three homers and 15 doubles and drove in 45 runs.

Casey Gouge had a memorable two-way season (8-0, 2 saves, 3 homers, 29 RBIs). He may have made himself a two-way player at Catawba.

As far as the coaching staff,  thank them for providing another entertaining summer and for carrying on a proud tradition at Newman Park.

Buddy Poole, 76 years young, called his last Legion games on the radio. He didn’t get to see Rowan win another championship, but he went out with some outstanding games.