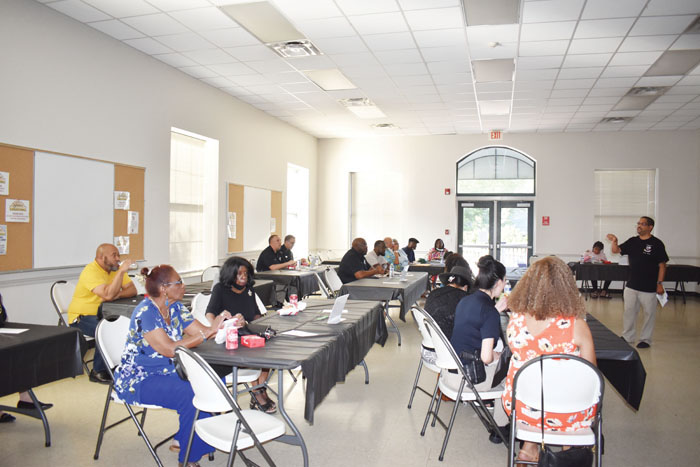 SALISBURY — The second Cultivating Community Conversations, held by the Salisbury Police Department and open to all members of the community, was slightly less well attended than the first, but those who came were not silent.

Rev. Dr. Roy Dennis, Police Chief’s Advisory Board chair and pastor at Gethsemane Missionary Baptist Church, opened the meeting with a definitive statement that captured the heart of the entire series of meetings.

“If you don’t communicate, you fail,” he said. “So we are here to communicate.” He then introduced city officials.

“Thank you for being here, for telling us what we are doing right, but more importantly what we need to do better,” Alexander said.

“Some problems we face require a deep synergy,” Smith said. “When people from all different backgrounds, with all different experiences, come together and pool their wisdom to find answers, that’s what we need.”

Greene, who has been in his position just eight weeks, said he is aware that the city exudes “a passion and a sense of community,” and he is “ready to hear your needs and your concerns.”

“The city is working with the police department, the fire department, and the community to address crime,” McLaughlin said. “It takes a bit of time, but communication opportunities like this are incredibly helpful in finding solutions together.”

Chief Jerry Stokes took a moment to introduce the officers in the meeting, including patrol officers, detectives, sergeants, lieutenants and a captain, along with two new officers who are heading to their Basic Law Enforcement Training soon.

“These are the people I hope you get to know,” he said.

Anne Little, director of diversity, equity and inclusion for the city, welcomed community members as well.

“My job is to ensure all voices are heard, all voices matter,” she said. “A lot of times, we have more in common than we think, we just don’t know it because we don’t talk. This is a time to talk. And I live here, too, so what affects you also affects me.” She pointed out that there were note cards and pens on each table, and if anyone did not feel at east speaking in front of a group, they could write their questions and contact information on the card and they would get an answer.

The first community conversation event was held June 9 at Kelsey Scott Park. There, more than 50 residents joined in discussions about patrols, street lighting and youth activities. This second meeting focused a recent increase in violent crimes, and on building relationships between officers and residents. It also involved a bit of praise for the police department.

Asked what steps the police are taking to keep residents safe, Stokes said part of the effort is targeting where police need to be.

“We are trying to use technology and data to be in the right place,” he said. “Crime isn’t everywhere all at once. It is in particular locations, so we try to have a higher presence in those places.” He said that is both to help residents feel more secure, and to send a message to the criminals that “this is not the place for them to be.” He said the department is also working behind the scenes with Project Safe Neighborhoods to pinpoint people who are consistently coming up in investigations. The department has even reached out to help from federal authorities to strengthen their ability to get those repeatedly involved in crime off the street.

“On the flip side of that, we are also working to divert people away from crime,” he said. “We are trying to identify what is driving them to criminal activity, and then help resolve those underlying issues.”

“Job No. 1 is to enforce the laws and hold people accountable,” he added. “But we can’t arrest our way out of the problem.” Prior to the COVID outbreak, he said the city was at a 20-year low in violent crimes, and that was only as far back as he could find records. During COVID, the numbers rose nationwide, but right now, the city’s violent crime numbers are lower than they were a year ago, and there is a downward trend, “in spite of a few bumps right now, which is typical of summer.”

Virginia Brown, president of the Park Avenue Redevelopment Corporation and an involved neighborhood resident, said when the corporation was started in 1998, they formed a neighborhood watch, and people were strongly encouraged to share information with police, and for 10 years, it worked.

Stokes said neighborhood watch programs have dwindled in recent years and he would like nothing better than to see them come back, “because we can’t be on every street corner, so to have extra eyes and ears is a tremendous help.”

Brown said the crime in the Park neighborhood is far better than it was in 1998, but pointed out that people are still afraid to use the actual park.

She had high praise for officers in a separate situation, though. Her nephew, she said, was in a car accident about three months ago, and “he was at fault. With all the things you read and hear today about how officers treat Black men, he was nervous and so was I. But when the officer got there, and I am sorry I cannot remember his name because I’d like to thank him, he treated my nephew with such compassion and respect. It put my nephew at ease, and he treated me with that same respect, so I wasn’t worried about my nephew getting dragged out of the car and shackled. And that is the kind of behavior we need to encourage among officers, because it makes them far more approachable, and we are going to be more willing to come forward.”

Moving the conversation along, Little asked William Wilson Jr., 16, what his favorite thing about Salisbury is.

“The community,” he said. “Everybody I know and love is here. And the people around me will give me the best advice on how to be my best self.” He said some kids get steered off the best path and end up doing things that “are clearly unnecessary,” but he said having a solid family background, or a strong, reliable role model, can change things.

Rev. Dennis reminded those in attendance that there are two more community conversation meetings, and that next Tuesday is National Night Out, another opportunity to talk with officers in an upbeat, positive situation.

SPD is one of 40 organizations across North Carolina selected as a recipient of the $25,000 Duke Energy Foundation grant as part of the energy company’s $1 million pledge to social justice, racial equity in North Carolina. The department has used the grant to sponsor these gatherings between residents and officers in order to begin to develop trusting relationships in both directions.