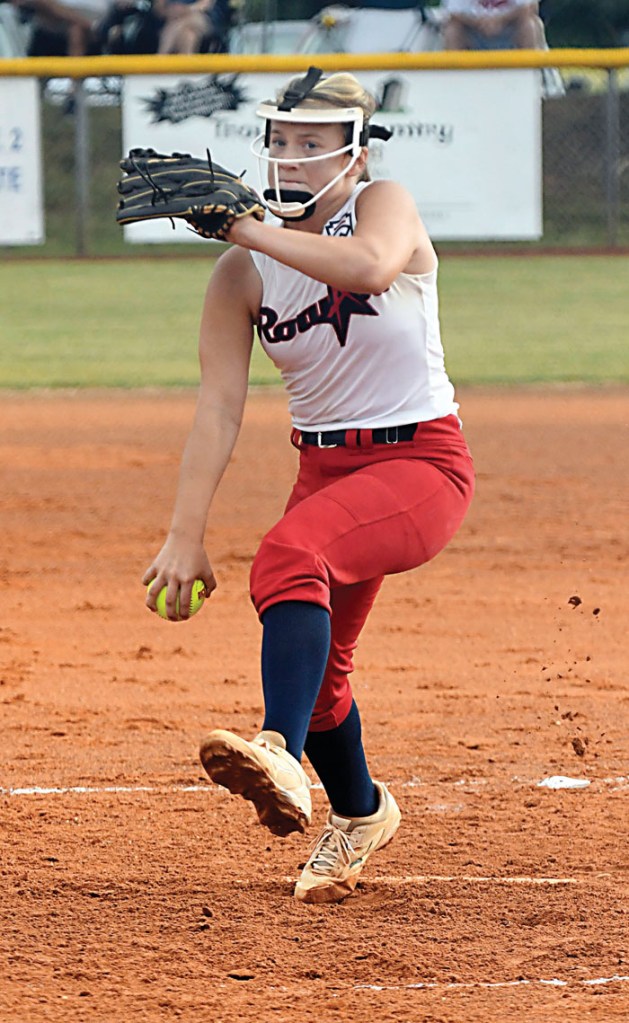 Reese Poole pitches during a game earlier this season. She had three hits and struck out 11 batters in Monday’s Southeast Regional win against South Carolina. photo by Wayne Hinshaw, for the Salisbury Post

WARNER ROBINS, Ga. — Reese Poole had three hits and struck out 11 batters as Rowan Little League’s 12U all-stars stayed alive in the Southeast Regional on Monday.

Bouncing back from Sunday’s 4-2 loss to Georgia, Rowan scored five runs early and held on to beat South Carolina 5-3 in an elimination game.

South Carolina scored a run in the fourth and two in the sixth.

Rowan (2-1) still has a lot of work to do and will have to win twice on Tuesday just to get to the regional championship game.

Rowan batted first against South Carolina and got some momentum with a three-run first inning.

Poole and Mya McNeely opened the game with back-t0-back doubles for a quick 1-0 lead.

Leah Troutman’s single moved McNeely to third. She scored from there on a passed ball. Cressley Patterson’s hit made it 3-0.

Hits by Emma Efird and Poole and some miscues by South Carolina helped Rowan push its lead to 5-0 in the second inning.

McNeely and Troutman had two hits each. Kayla Burns had a hit and scored a run.

Poole allowed seven hits and one earned run. She walked three and pitched around two errors.

In Monday’s other game, Florida pounded West Virginia 15-3 to reduce the field to four teams.

Tennessee was eliminated on Sunday.

Rowan will play Florida (2-1) in an elimination game on Tuesday at 10 a.m.

Georgia and Virginia haven’t lost yet and will play at 1 p.m. on Tuesday.

The Rowan-Florida winner will play the Georgia-Virginia loser Tuesday night at 6 p.m.

The championship game will be played at 10 a.m. on Wednesday.

The regional winner advances to the World Series in Greenville, N.C.