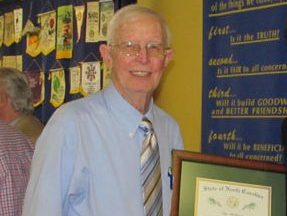 Bob Mauldin of Kannapolis was honored with the Order of the Long Leaf Pine. Salisbury Post file photo

Some years ago the high school wrestling team I was part of wanted to honor our coach, Bob Mauldin. With the help of his wife Donna and our spouses, we planned a surprise tribute for him, and about 80 old wrestlers and spouses attended. It was a success, and our beloved coach was surprised — at being the main guest and by words admirable spoken about him after supper.

The spoken tributes for Coach Mauldin varied — some serious, others full of humor, but all centered on our coach and how he had influenced our lives as boys then later as men. But one talk stands out, and when I received word yesterday that Danny had died after battling cancer, I thought of him and what he said and did that night.

Mementos are usually privately kept, stored away for reasons known only to the person placing the small item away in a secret place. Even if the memento is a flower or clover leaf placed between the pages of a book, it serves a role in someone’s life. As J. L. Carr observes in his novel of memory and lost love, “A Month in the Country,” someone in years hence may purchase a book at a sale and later find a dried Sara van Fleet rose carefully placed between two pages. But no wonder, most folks put seemingly insignificant things in private places as reminders of someone or a time or both which was special but is now past. But the memory of the importance signified by the memento lives as long as the memorizer.

As I recall, Danny was the last speaker at Coach’s tribute. Watching him walk to the microphone, I noticed that he was still rather small, like the wiry wrestler he was those years ago.

He then shared how when he was a soldier serving in Vietnam he received a letter from Coach. Danny did not share with us the contents of his letter, but he did explain the importance of Coach’s words to him, a young man far away fighting in a brutal war. Coach’s words were a salve to his soul Danny said, and with that Danny reached into his hip pocket, pulled out the letter, and then thanked Coach for writing him and said something like, “It’s your letter, Coach, and now I give it back to you.”

Most mementos are private, but at Coach’s dinner we all were witnesses to a memento of one of us, shared publicly, who is now dead as is the writer of the letter. While we do not know the contents of the letter, we were given the privilege of acknowledging a gift to one of us from our Coach Mauldin. The white, small and crumpled envelope held a message to Danny, one that he had cherished, carried and held close for years. His public sharing of it told much, but most of all it was a witness of what we all do — hold seemingly insignificant things like cloverleafs or flowers dear to our selves. Danny shared his beloved memento of Coach with us.

I think Danny saw his talk as a thank you to Coach, which it was, but it also spoke of holding close what is dear, no matter from whom or from what circumstance–even if only a Sara van Fleet rose between the pages of a book.

Roger Barbee lives in Mooresville. Contact him at rogerbarbee@gmail.com.