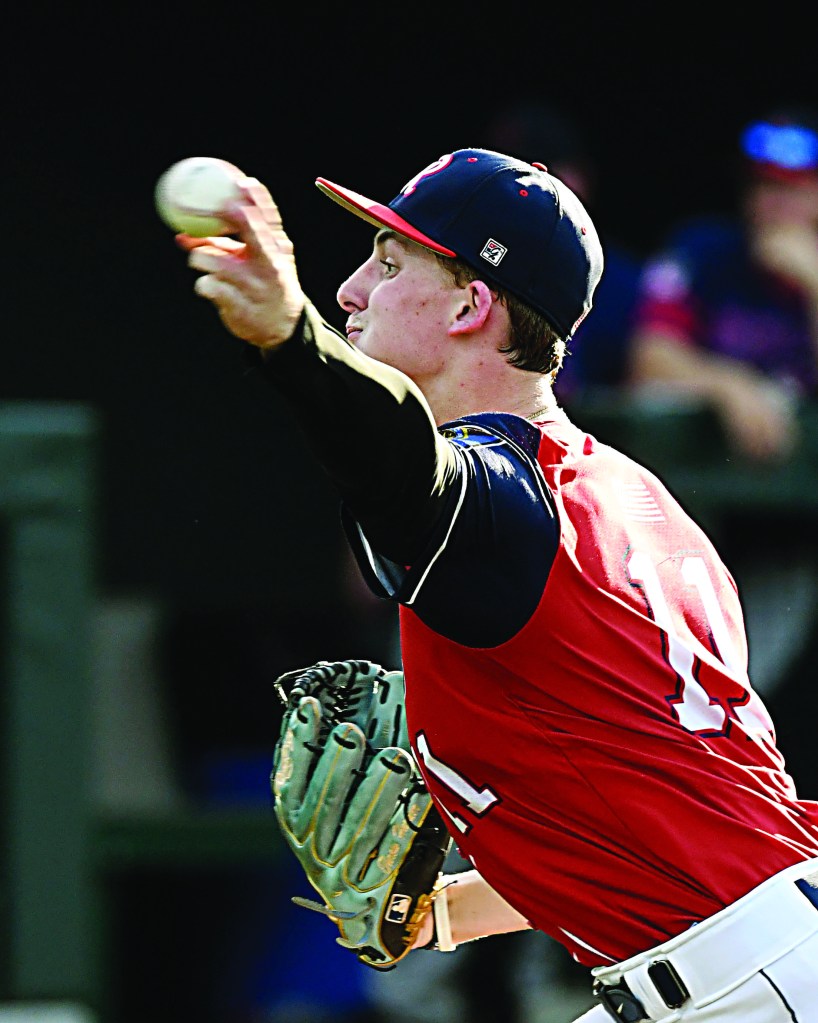 Rowan used both of its top pitchers — winner Jake Blevins and Casey Gouge, who turned in a hard-earned, three-inning save — to hold off Randolph County 6-4 on Friday night in a thriller at Newman Park.

Blevins gave Rowan four solid, efficient innings to improve to 8-1. It was the second save for Gouge, who made big pitches with Rowan on the brink of disaster in the fifth and the seventh.

The latest victory by Rowan meant the 21st Area III championship for the program, by far, the most by any program. Kannapolis has won 11, while Randolph owns 10 titles.

Rowan (34-7) has won 19 straight, including three semifinal forfeits against Eastern Randolph, and will take some momentum to next week’s state tournament. Rowan heads to the state tournament for pool play at Campbell University as a No. 1 seed, although the two pools look to be very balanced. Fuquay-Varina, the host and defending champion, is probably the favorite, and is in the opposite pool from Rowan.

Rowan had not played an official game since July 13 at Mocksville but had a great start offensively. Rowan never trailed after taking a 2-0 lead in the bottom of the first against Randolph starter Trey Way.

Doubles by Cole Johnson and Jackson Deal made it 1-0. Deal came around to score on Aiden Schenck’s deep fly and Blake Hill’s RBI groundout.

Rowan made it 4-0 in the third with consecutive singles by Deal, Schenck, Hill and Gouge. Rowan had a chance to break it open, but with runners on the corners, Randolph reliever Tanner Marsh got a strikeout and a groundout to keep Post 45 in the game.

With the help of some sharp defense that included a first-inning twin killing, Blevins put up zeroes in the first three innings against a squad that had won 12 in a row and was batting over .340 as a team.

Randolph got on the board in the fourth, but Blevins, after a mound visit, was able to limit the damage to one run. He turned things over to Gouge with a 4-1 lead.

It took Gouge some time to settle in. Randolph’s offense got rolling in the fifth and quickly sliced Rowan’s lead to 4-3. With runners at second and third and no outs, Gouge found it. He struck out three straight hitters to keep the lead.

Rowan got two huge insurance runs in the sixth. Gouge got the inning started with a hit. Zander Burton didn’t start the game, but entered the game in left field as part of several Rowan defensive switches in the fifth that were necessary when Gouge moved from first base to the mound. Burton doubled to make it 5-3.  Johnson’s RBI single bumped the lead to 6-3.

Gouge had an easy sixth on the mound, getting the bottom of the lineup out 1-2-3, but the top of the seventh proved eventful.

Tatum Marsh got a lead-off  hit — he went 3-for-3. When Rowan failed to get an out on two straight bouncers to third — one high throw, one eluded tag — Randolph had the tying runs on base with no outs.

He got the first out of the inning on an infield popup. Then he got a ground ball back to the box, and Rowan executed on a 1-2-3 double play to end an exciting game.

NOTES: Rowan’s pool play games are set for Tuesday, Wednesday and Thursday afternoons at Campbell’s Jim Perry Stadium. Rowan is in a pool with Area I runner-up Pitt County, Area II top seed Wilmington and Area IV runner-up Queen City. Rowan plays Pitt County at 1 on Tuesday, takes on Wilmington at 4:30 on Wednesday and takes on Queen City at 4:30 on Thursday. The top two from each pool will advance to Friday’s semifinals. The championship game will be Saturday with the champion joining host Randolph County for the Southeast Regional at Asheboro’s McCrary Park. As far as the state tournament, Randolph is in a pool with Area IV champ Cherryville, Area II No. 2 seed Hope Mills and Area I kingpin Fuquay-Varina, the host team and defending state champ. … Rowan will play at Randolph on Saturday afternoon, as both teams get in a tuneup for the state event and get their pitchers some work. Three of Rowan’s losses this season have been to Randolph.