Sports obituary: One of a kind, Ed Bowles coached for 45 years 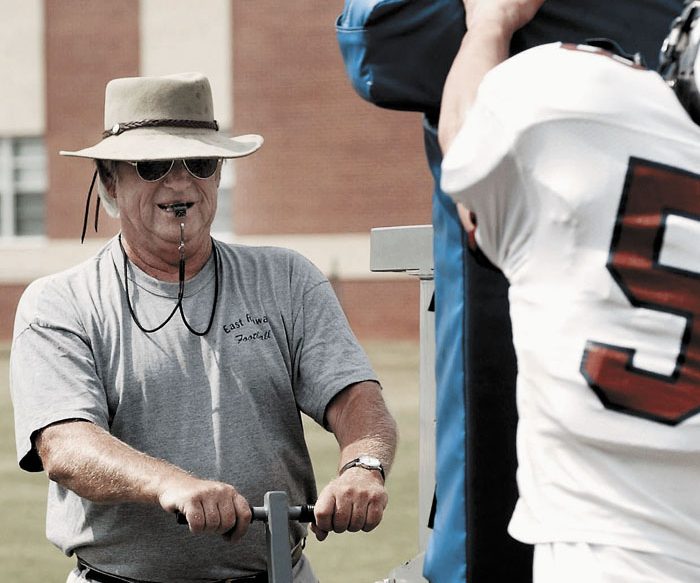 SALISBURY — Edward Lee Bowles was the name printed on his birth certificate in 1943, but he was simply “Coach Bowles” to hundreds of football players and track men.

Bowles was the best kind of coach, the kind that pushed young athletes to their limits — and then past those perceived limits. He pushed them to be the best that they possibly could be. He pushed them in a remarkable  coaching career that spanned 45 years.

After Bowles passed away on Sunday at 78, there was an outpouring of emotion from adults whose lives he impacted while they were still in their teens, men he taught and coached at East Rowan or coached at West Rowan.

“Ed was the hardest-working man I’ve ever known,” said former East Rowan head football coach W.A. Cline. “He’d go out to paint the football field, and he’d come back with as much paint on him as there was on the field. He’d get after it. When they made Ed, they broke the mold. They never made another one like him.”

They say Bowles was struck by lightning once. Some say he walked away from lightning strikes twice.

“I didn’t see it happen, but Ed did tell that story,” Cline said. “He’d tell the kids that being hit by lightning is what made him so tough.”

Gruff and rugged on the outside, a mushy heart of gold beat on the inside. Bowles became a part-time father for dozens of students who didn’t have one. He bought cleats and track shoes for athletes who couldn’t afford them.

He became an integral part of their lives. Long after athletes graduated, Bowles turned up at their weddings, showed up at the funerals of their parents.

“When I tore my ACL and the insurance would not cover any more physical therapy, Coach Bowles personally did it,” former quarterback Raymondo Brady wrote on social media. “He came in early and stayed late to help me work out and stretch and poured countless ice baths.”

While he is identified strongly with Rowan County, Bowles’ remarkable story starts at Davie County High. In 1958, he was a scrawny 5-foot-11, 118-pound freshman flanker. He had forged his mother’s signature so he could try out for the team.

Head coach Jack Ward and assistant Bill Peeler knew how to separate hitters from quitters. They had the 118-pound kid pop pads with the linemen — without the benefit of a face mask. Bowles’ nose got wrecked, but he kept coming back for more. He loved the game, loved the contact.

By his sophomore year, Bowles was still 5-foot-11, but he’d grown to 180 pounds and was a starting tackle. And now he was doing the wrecking.

He was the second Davie player chosen to compete in the East-West All-Star Game in the summer of 1962. He played on both lines as the all-stars hammered one other in a 0-0 draw.

Bowles also did well in high school baseball. He was an all-conference catcher.

Basketball, however, wasn’t suited for him. He’d knock enough people down to foul out in five minutes.

Bowles signed with Wake Forest’s football program, but then he didn’t qualify. He switched to UNC, but he came up one math class short of enrolling in Chapel Hill.

He’d given up college and was going to enlist in the Marine Corps, but the recruiter listened to his story and changed Bowles’ life. He drove him to a little town in the mountains — Cullowhee.

It was at Western Carolina that Bowles’ football career and education continued. They took one look at him and offered half a scholarship, with a promise to boost it to a three-quarters scholarship if he could make the first or second team.

He liked everything about college football, even spring practice in February. They practiced in sleet and snow. Ice hung from his helmet until the weather warmed a little.

They put him on the “Fat Man Detail” when he first got there. That meant he ran for an extra 45 minutes after every practice. He lifted and he ran, and then he ran and lifted some more. His diet was water, vitamins and jell-o.

A tough man got tougher. The baby fat disappeared. His pants size dwindled from 46 to 34. And he was on full scholarship.

Bowles became a team captain. He was a beast for Western, playing against teams such as Catawba, Elon and Appalachian State in the Carolinas Conference.

He made all-conference. He graduated. His earliest coaching positions were in Atlanta and Gaffney, S.C.

He earned a master’s degree in education from Middle Tennessee University in 1972.

He came to settle in Rowan County in a twist of fate. He was at Hargrave Military Academy in Virginia in 1976 and someone from East Rowan had left a sport coat up there. Bowles knew where East Rowan was, so he volunteered to drop the coat off.

When he showed up, East happened to be in the market for an assistant football and track coach and P.E teacher.

Bowles met with Boyce Caudle, who was the principal. They chatted. Caudle offered a job. Bowles accepted on the spot.

That wayward sport coat led to a lot of lives changed for the better.

Over the next 28 years, Bowles would become an icon in Granite Quarry. The students dedicated their annual to him five years after he went to work there. He coached offensive linemen, defensive linemen and linebackers for the football program.

“Ed was a great position coach,” said Cline, whose second head-coaching stint at East was from 1987 to 1994. “The kids loved him and they worked hard for him. We didn’t see him at the school all that much. He stayed in that field house. That was his home, his domain. He kept it spic and span. He opened the weight room early and closed it late and our kids had a great opportunity to get better.”

Rick Roseman, a long-time coach at East, remembers his first meeting with Bowles.

“We were watching a basketball game on TV, and Ed was talking a mile a minute, but I couldn’t understand a word he said,” Roseman said. “He talked fast and he talked low. I just smiled a lot and nodded occasionally. But I got to be friends with him — like everyone else did. He was a unique man. I swear there were days when he mowed that football field four times. He loved that field, and he loved the kids. He was a father figure to lots of them.”

During his teaching career, Bowles taught health and P.E., strength and flexibility, world history and psychology. Besides football and track and field, there were times he coached baseball, golf and wrestling.

One of those East students in the late 1980s for whom Bowles opened the weight room early and closed it late was named Scott Young.

Maybe Young never gets a chance to be on the football team at Guilford College if not for Bowles.

Young was hired as West Rowan’s head football coach prior to the 1998 season. He never forgot Bowles.

After Bowles retired from teaching, Young  asked him to come to work as an assistant with the Falcons’ football program.

Three back operations and arthritis had finally slowed him down some, but Bowles put on the light blue for the first time in 2004. Working mostly with the defensive linemen, he was part of West’s three consecutive 3A state championships from 2008-10.

Early in the 2012 season, West played Davie in Mocksville,

Bowles was inducted into the Davie Sports Hall of Fame that night at halftime. Then the Falcons presented Bowles with the game ball after a physical 14-7 triumph.

“Coach Bowles was a hard-nosed guy when I was playing and he always was a loyal Scott Young disciple, played his role well on those championship teams,” said former West tight end Louis Kraft, who is now head coach of the Falcons. “Even in the last few seasons, Coach Bowles was someone who I could talk to before a game and count on for some words of wisdom. He was a legend and he was a security blanket. I’m going to miss him.”

Roseman ran into Bowles at Biscuitville not long ago. They chatted about track and field rules. Roseman still couldn’t understand most of the conversation, but he smiled a lot and nodded his head occasionally.

Brady ran into Bowles at a football game last fall. Bowles told Brady how proud he was of the man Brady had become.

Brady is Reverend Brady now, the leader of his own flock,  but who knows if that would have happened if Bowles hadn’t paid for those rehab sessions and poured those ice baths.

“Coach Bowles kept encouraging  us long after we hung our jerseys up,” Brady said.