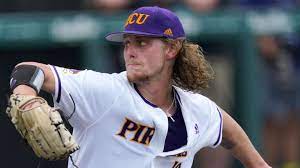 As a senior at Davie County High in 2019, left-hander Carson Whisenhunt couldn’t have been much better.

He went 8-0, struck out almost two batters per inning for the season and helped himself at the plate with three homers and a .343 batting average.

So it wasn’t a shock when Whisenhunt, now 21, was a second-round draft pick on Sunday night. The San Francisco Giants took him with the 66th pick.

As one of the top southpaw prospects in the draft, Whinenhunt was projected by many scouts to go even higher than that. One respected talented evaluator had him at No. 16.

Recruited by East Carolina, the 6-foot-3, 205-pound Whisenhunt stood out in his second year in Greenville. As a sophomore, he was 6-2, struck out 79 in 62 innings and played for Team USA.

He was a preseason All-America prior to the 2022 season but was suspended two days before the season began by the NCAA after testing positive for a banned substance.

Whisenhunt said, “Over the winter break I took supplements I purchased at a nationwide nutrition store which resulted in a positive test.”

He returned to action in June in the Cape Cod Baseball League and struck out 21 top college players in 16 innings. He showed he was healthy and sharp and he had one of the fresher arms in the draft after missing the college season, one of those blessing-in-disguise sort of things.

He is viewed as a pitcher who can be a mid-rotation starter in MLB.

His changeup is rated was one of the best in the draft. His fastball is in the 93 mph range, and he also mixes in a solid curveball.

Davie’s Whit Merrifield, a ninth-round pick in 2010, has enjoyed a terrific MLB career, and it’s possible Whisenhunt could join him in the majors in a few years.