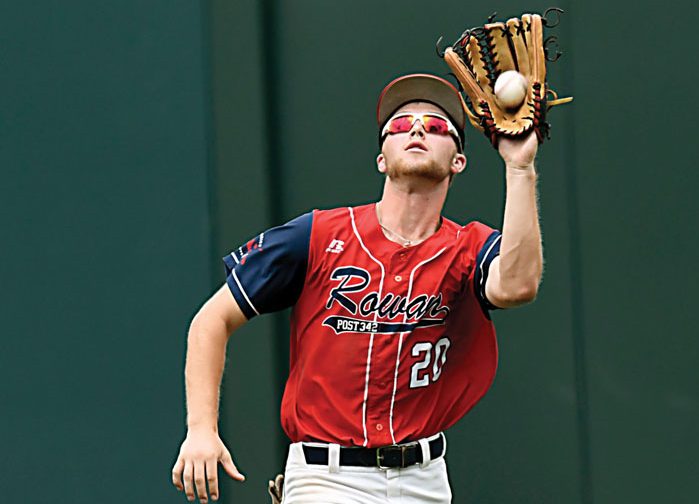 “Playing shallow gives me a chance to take away hits every night,” Deal said. “And it gives me a better chance to throw out some runners.”

Playing shallow means that on a given night Deal might turn two or three bloopers and sinking line drives that are normally singles into outs.

The trade-off is that maybe once a week someone blasts one over his head.

Some people who have been around a long time believe Deal is one of the best American Legion center fielders they’ve seen at Newman Park. He doesn’t lose sleep over balls hit over his head because he honestly  believes he can catch them, too.

In the July 6 game with Stanly County, Matthew Connolly had just entered the game in the seventh to pitch in relief. Stanly’s Connor Whitley led off the inning, and he got all of one, sending it rocketing over Deal’s head and toward the 370 marker at the reconfigured Newman Park.

But it wasn’t a triple or a double. It was an out.

“I didn’t think I could get it, but I flipped my hips and sprinted,” Deal said. “I’m running straight back toward the wall, running, running, and then I stuck my glove up and the ball went right in there. It was like a perfect pass in football. I’ve caught a few over my shoulder like that.”

Dale Snyder, Rowan County PA man cleverly Tweeted a photo of Willie Mays’ famous over-the-shoulder catch in the 1954 World Series that is still the most famous catch ever made by an outfielder because it saved a World Series game and because it came 450 feet from home plate. Deal’s catch didn’t have that sort of distance, but there were similarities.

In his days at South Rowan, Deal probably was better known for football.  A grandson of long-time South football coach  Larry Deal, he’s the son of Andrew Deal who was a good baseball and football player in the mid-90s for the Raiders.

If Jackson had played on stronger high school football teams, he might be playing slot receiver in college now, but by his senior year at South, it was his baseball potential, especially his 60-yard dash times, that got him noticed. He got a chance to play baseball and go to school at Division III Methodist University in Fayetteville.

He didn’t get to the plate a lot as a Methodist freshman. The school had a COVID redshirt backlog like everyone else. But Deal didn’t sulk. He found a role, getting into games as a pinch-runner and staying in to play defense in left field.

“I learned a lot of as a freshman, found ways to help a good team win games and I did well in classes,” Deal said. “I considered it a very successful year. The future looks good.”

Methodist head coach Tom Austin is a legend, a D-III version of Catawba’s Jim Gantt. He encouraged all of his players to compete in summer ball at some level.

“He didn’t want us to lose over the summer what we’d gained during the school season,” Deal said.

American Legion was the right level for Deal. He anticipated playing for Kannapolis Post 115 for the first time. Ty Hubbard, a long-time friend and South Rowan teammate was going to play for Kannapolis,  and Ty’s father, Joe, is Kannapolis’ head coach. He’d been one of Deal’s coaches for many youth baseball championship seasons.

Fortunately for Rowan County, the Deals, who reside in China Grove, live roughly three miles closer to Salisbury High than to Northwest Cabarrus High, the base school for Kannapolis.

“When I couldn’t play for Kannapolis, I called (Rowan assistant coach) Adam Patterson because I knew him,” Deal said. “A few days later, I was playing at Newman Park. That’s the nicest field I’ve ever gotten to play on. I know it looks like rubber from the stands, but it’s not like that at all.”

Rowan coaches penciled in Deal as the right fielder initially because he has the arm for it. In his days at South Rowan, he pitched some. He can throw in the 80s.

But his stint in right field lasted roughly one game. It didn’t take long for Rowan’s staff to figure out Deal was their quickest outfielder, and he made the move to center. He’s been there ever since.

“I’d heard about Deal from when he was at South, but didn’t know him at all,” Gantt said. “I did know that he wouldn’t have been recruited by Tom Austin at Methodist unless he had character and he wouldn’t be playing for Methodist unless he had skills. He’s been good. He’s solidified our outfield, and he’s solidified the top of our batting order as our No. 2 hitter.”

Back in the mid-1990s South Rowan Raiders such as outfielder Brian Burchette and pitcher Jonathan Mullis were a big part of Rowan County Legion success.

Weary of its players being split between Rowan, Kannapolis and Mooresville and wanting them to play together in the summer, South Rowan started its own Legion program in 1996 and eventually fielded some fine teams. South Legion lasted until 2015.

Deal scores a ton of runs with his wheels and his 33 RBIs are second on the team behind Blake Hill. He’s been excellent at getting runners home from third base with less than two outs.

“Those are situations we always worked on a lot in high school,” Deal said. “It’s pretty simple, You’ve got one job to do. Put it in play. Get that runner home.”

He’s hit a few homers in BP, but he hasn’t hit one in a game yet at Newman, a much friendlier park to pitch in with the expanded dimensions.

His biggest offensive game to date was a 5-for-5 effort against Concord on A.L. Brown’s field. He socked two long doubles and knocked in five runs.

“It’s been kind of a crazy summer,” Deal said with a laugh. “We went to Kannapolis to play Concord and we basically went to Concord to play Kannapolis.”

While his offense has been fine, it’s Deal’s glove that has made the biggest impression on Rowan fans.

For someone with very limited experience in center field, he’s been sensational.

“In high school I was pitching or playing third base, left field or right field,” Deal said. “We always had Kane Kepley who is a great center fielder and is all over the place, so they didn’t need me in center, but I did learn a lot from watching him.”

He didn’t get to see South Rowan High win the 3A championship this year, as Methodist was playing those days, but he did get to see the Raiders twice in the playoffs. He was there for one of the North Lincoln games and for the monumental game against East Rowan.

“South looked the best I’ve ever seen them look,” Deal said. “I told people before the season started that either South or East would win the 3A state championship.”

While Deal wasn’t on the South team this year, he helped South get that championship. South turned the corner late in his senior season in 2021 when it won the Central Carolin Conference Tournament and two playoff games. That set the table for a historic 2022.

“My senior year the Oak Grove, North Davidson and Ledford games were really big games for us, but they didn’t matter much to the rest of the county,” Deal said. “But then when you start playing East, West and Carson, then it matters to everyone countywide. The crowds South drew this year were amazing.”

There are two more ball-playing Deals in the pipeline— Landon, a rising freshman at South, and Mason, who will be a fourth-grader.

Jackson will never get to have the fun of being their teammate, but he understands that part of his job as a big brother is to set a good example and earn a college degree. There’s more to it than baseball for him.

Rowan is headed for the state tournament. Deal is looking forward to that.

There will also be an Area III championship game on July 22. In a perfect world, it will be Deal’s Rowan team against his friend Hubbard’s Kannapolis team.

“We were on different teams in regular season in youth baseball, but then were always teammates in all-stars and then in high school,” Deal said. “It would be a little weird playing against him, but it would be fun to compete against him.”

Whatever field he plays on, Deal will play shallow in center field, ready to take those bloop hits away, but confident he can get back, back, back, if someone gets hold of one.

“Deal brings a lot to the table,” Gantt said. “As a college guy, he’s got a little extra maturity, and he can really go get it. That catch against Stanly — that was something to see.”