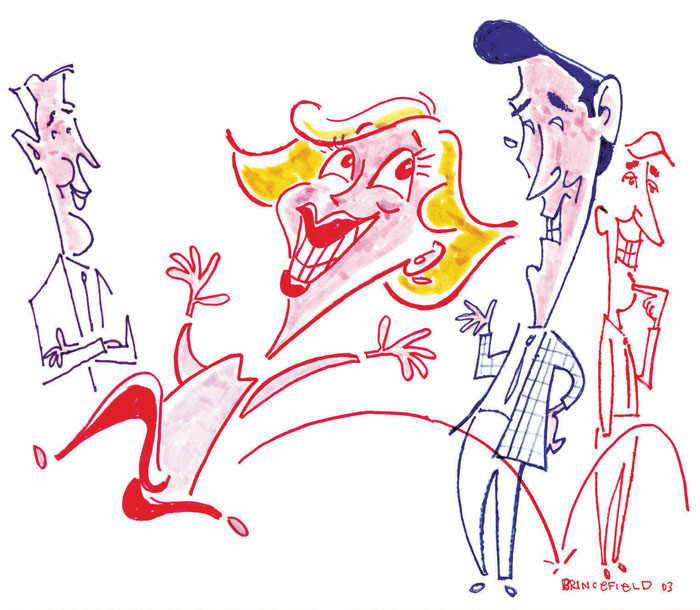 I’ve always found the phrase “women of a certain age” to be decidedly … uncertain.

What is this “certain age?” Why is it too delicate to clarify? Why does this utterance reek of patronizing insult?

The expression was made popular by psychotherapist Lillian B. Rubin in her 1979 book, “Women of a Certain Age: The Midlife Search for Self.”

The first historical reference was coined in 18th century England by poet Lord Byron as a description of spinsterhood. These “unfortunate” women had no other way to describe their sad state of purgatory between “Miss” and “Mrs.”

I queried men in my life for their perspective on “women of a certain age.” Initial reactions revealed obvious discomfort and suspicious responses, including: “Why do you ask?” “Is this a trick question?” and “This feels like a trap.”

Fortunately, others were more responsive. A Raleigh friend said, “women of a certain age” were “certainly not spring chickens, but not very old.” “Maybe middle aged,” he said. “Wise and experienced.”

Ben from Wilmington innocently deflected: “I don’t think anything about it. What about you? How does it make you feel?” With this shrewd response, he successfully avoided the question and deftly communicated that my female emotions were more valid than his. Nicely played.

As the title of this column, “Women of a Certain Age,” is a tongue-in-cheek reference to both the positive and negative connotations of female middle age. The reality is that “women of a certain age” refers to females ages 40 to 65, midlife years that can be both challenging and tumultuous.

During this time, women are dealing with significant biological changes, as well as raising children, securing finances, work problems and the death of parents, all while attempting to achieve personal goals. Midlife women also report feeling invisible and unheard, a condition only exacerbated by the isolation and aftermath of COVID-19.

“I’m too young to be old and too old to be young.” — Kathy Bates as Evelyn Couch, “Fried Green Tomatoes”

When this film was released in 1991, I was 12 years old and far too young to fathom Evelyn Couch’s dissatisfaction with her marriage, her life, and herself. Now, this lamentation rings truer than I’d like.

I chose to “skip” my first few midlife birthdays. Most likely to avoid the realization that half my life might be over and to sidestep the comparison frenzy it triggered. Studies show women entering midlife begin to measure themselves harshly against the lives, accomplishments and looks of other women. I was no different.

When Mom made her well-meaning request for 2020 family newsletter fodder, I was unemployed, broke and beginning my second decade as a single divorcee. With no chirpy achievements to announce, I felt completely unsuccessful. The corresponding news of my sister’s engagement and holiday wedding made me feel even less worthy, despite that I was incredibly happy for her.

As my next birthday approaches, I have chosen to accept the reality of midlife. My increasing white hairs require regular cover-up. My eye doctor prescribed bifocals. Younger men are requesting the “older woman dating experience.” Ouch!

But the news isn’t all bad.

“Face it. I’m older and I have more insurance.” – Kathy Bates as TOWANDA!

Evelyn’s parking lot rage scene was vastly satisfying. Alter ego “Towanda” boldly embodied her newfound confidence. Evelyn realized that “women of a certain age” possess the powerful force of wisdom, experience and elegance that can only be acquired with time.

Now, middle age means more to me than fear and failure. Four months after the dreaded family newsletter, I was interviewed and hired for the most rewarding job I’ve had. Twenty years of past work experience didn’t make me old; it made me a well-compensated asset. Middle age means I determine my own standards of success, whether or not they include marriage, children or homeownership.

As a single woman, middle age means I’m wise enough to value the nice guys and let the bad boys go. I can spend an evening alone with Netflix, hot cocoa and my fur babies without FOMO (Fear of Missing Out).

Most importantly, middle age means I understand the necessity of connection with other “women of a certain age” – the family, friends, colleagues and mentors I rely on for empathy, encouragement and a quick laugh.

In that spirit, I share my personal stories in hopes that “Women of a Certain Age” will create an interactive community for women experiencing the many transitions of midlife. What does “women of a certain age” mean to you?

Brownley Elizabeth “Liz” Senn is a Salisbury resident and North Carolina freelance writer with credits from The Charlotte Observer, Today’s Charlotte Woman, The New Bern Sun Journal, WILMA Magazine, and The Knoxville News Sentinel. She graduated with a bachelor’s degree in journalism from the University of North Carolina at Chapel Hill and kissed Vanilla Ice at Cat’s Cradle in Carrboro. She welcomes your opinions, advice, and everything else at Brownley.elizabeth.senn@gmail.com.