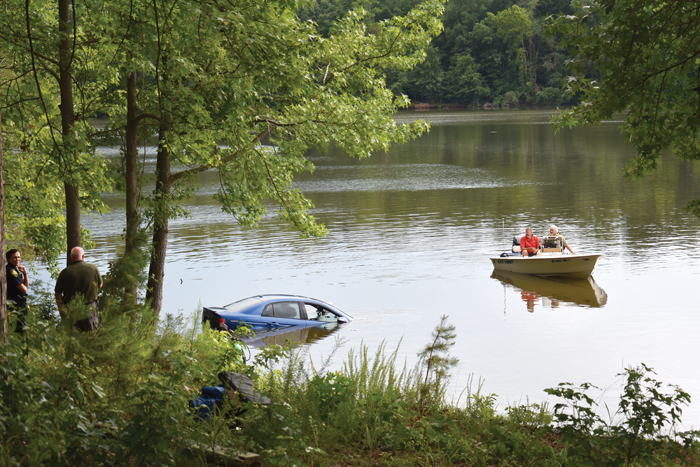 A man trying to elude police due to outstanding warrants drove his car straight into High Rock Lake Wednesday evening. After trying and failing to swim across, the man surrendered to police, who then had to pull his car from the water. Photo by Elisabeth Strillacci/Salisbury Post

Deputies with Rowan County Sheriff’s Office said police attempted to pull over a driver for a registration violation on Statesville Boulevard Cleveland, but instead of stopping, the driver took off.

The suspect, identified as Dustin Lee Blanken, 34, was trying to avoid an outstanding warrant for failure to appear, according to deputies. Blanken led police on a chase into Spencer down Long Ferry Road, turning on to Harris Point Road, which becomes a one lane gravel road before ending at High Rock Lake. Deputies noted it was likely Blanken did not know where the road led.

Deputies said Blanken drove his vehicle straight into the water, then crawled out of the car and attempted to swim across the lake before apparently realizing it was too far, and giving up. He was taken into custody without further incident, then police had the vehicle pulled out of the water.

Both the Rowan County Sheriff’s Office and NC State Highway Patrol were involved in the chase and capture of Blanken.

He was charged with felony flee to elude and failure to appear or comply, and court reports show he was currently on parole or probation for charges of receiving a stolen motor vehicle in February and possession of stolen goods in March.