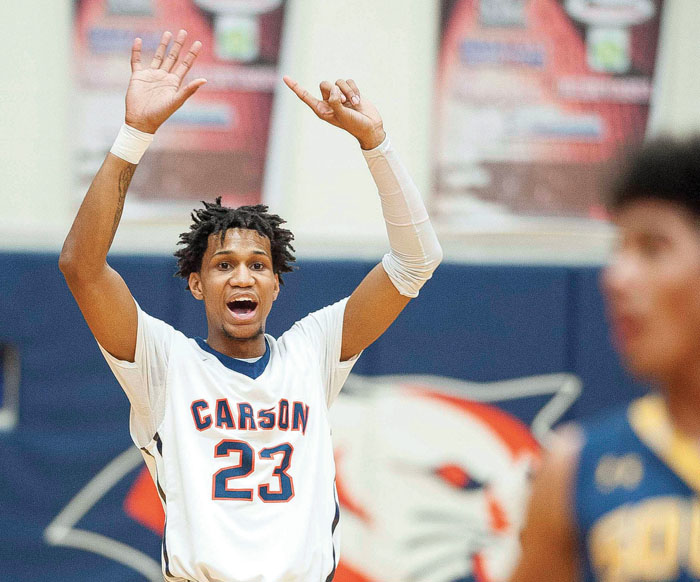 Jamarius Hairston, a 2018 Carson graduate, plans to make his final decision on where he'll play next season within a week or so. JON C. LAKEY / SALISBURY POST FILE PHOTO

JOHNSON CITY, Tenn. — It’s a Wednesday afternoon, and Jamarius Hairston is at East Tennessee State, touring the campus and the basketball facilities.

It’s 150 miles or so from Salisbury and all uphill.

But the ETSU Bucs have extended a scholarship offer to Hairston, a 6-foot-5 Carson graduate, and that means everything to him.

As good as he’s been at basketball, this is the first time a Division I school has offered.

“When I was a freshman in high school, I saw I had chance to play in college and started dreaming about Division I,” Hairston said. “Everyone dreams about Division I. This is meaningful for me.”

He’s got other offers — he was in California visiting Division II Fresno Pacific recently — but Division I is Division I, so ETSU is probably the favorite to be his next destination.

“The school year isn’t all that far away,” Hairston said. “I’ll be making a decision soon. Maybe in the next week.”

It’s been a long, winding and bumpy journey for Hairston.

No one had heard much for a while from a young man whose twitter handle is “The Walking Bucket.”

His days at Carson playing for coach Brian Perry were actually quite a while ago. He was one of the best the Cougars have ever had, the No. 2 scorer in school history with 1,659 points. Only Darius Moose scored more. Hairston was a program-changer. He had solid players around him as a senior when Carson won 26 games. Hairston was co-player of the year for Rowan County and MVP of the Sam Moir Christmas Classic.

But there are a lot of 6-foot-4 small forwards, and Hairston had played in the post because that’s where the Cougars needed him. Recruiting was quiet for someone with his credentials.

Things didn’t work out at all for Hairston at Lander, where his playing time disappeared.

He got his career back on track with a spectacular 2019-20 season after transferring to play for Matt Ridge at Davidson County Community College. Hairston got his swagger back at DCCC, leading the Storm to a 31-1 record and racking up individual accolades after scoring 20.2 points per game. An athletic slasher/shooter — 40 percent from 3 and 80 percent from the foul line for the Storm — he’d also grown to 6-foot-5, muscled up his lean frame a bit to 185 pounds and improved his defense.

A guy who had one offer coming out of high school had at least 10 D-II options after that super season at DCCC. He was the most recruited player in program history. He picked Lees-McRae, fascinated by the idea of playing at an elevated place known as “Dunk Mountain.”

In 2020-21, he was Lees-McRae’s leading scorer. He averaged 14.3 points per game and shot nice percentages, but that was the COVID season. It was over for the Bobcats after 12 games.

But a freak injury wrecked that season and came close to ending basketball for him.

“I was so ready to play and have that breakout season, and then I went up one night and came down on a player’s foot,” Hairston said. “I knew it was bad. I’ve rolled my ankle lots of times over the years, but never like that. My whole foot swelled up. The diagnosis was a bad sprain, a healing period of four to eight weeks.”

Crutches and ice were supposed to get him back on the court, but didn’t.  Terrible pain persisted in the ankle, even after eight weeks.

An ultra-sound procedure eventually revealed a torn ligament and cartilage damage. It was a lot worse than a sprain.

That led to surgery, performed at Appalachian State, last February. They found a second torn ligament during that process.

Since then, Hairston has embarked on a comeback, doing physical therapy in Salisbury. It was a thrill just to be able to put weight on his injured foot again.

“I had to use a scooter for a long time, then crutches and a cast,” Hairston said. “I’m not back yet to where I was, but I’m determined to get there. I’m making progress every day. The goal is to be all the way back to 100 percent when next basketball season gets rolling in November and December.”

Hairston’s time in Banner Elk was productive in the classroom. He’s a college graduate and owns a business degree.

“My one regret is that Lees-McRae never got to see what I can do when I’m at my best,” Hairston said. “I really wanted to do great things for them, but it’s best for me to transfer now, to start over.”

He’s in the transfer portal. He’s gotten offers. He’s moving on to one last stop on his college journey.

He has at least one year of eligibility left due to the universal COVID redshirt year. He’s hoping to get an additional medical redshirt season for 2021-22, although that hasn’t been determined yet.

Wherever he lands, he’ll be a graduate student. He’ll bring a lot of basketball experience and life experience to the table, in addition to being a skilled athlete and a solid teammate.

“I’ve got a degree, but I still have the goal of having a pro basketball career overseas,” Hairston said. “Now I just have to get healthy and show what I can do.”