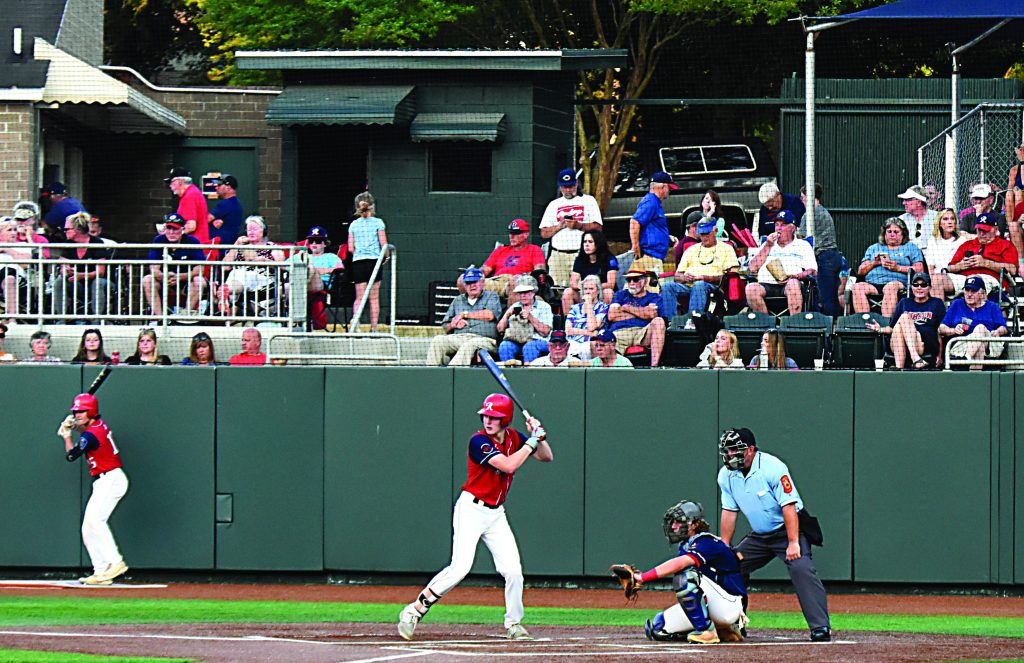 Rowan's Casey Gouge led the way at the plate Wednesday a day after shutting Mocksville down from the mound. File photo by Wayne Hinshaw, for the Salisbury Post

MOCKSVILLE — No truth to the rumors that Rowan County’s Casey Gouge is changing his first name to Shohei.

Gouge, who pitched Rowan to a tense 1-0 win against Mocksville in Tuesday’s opener in the Area III playoffs, finished off Mocksville in the best-of-three series with his bat.

Rowan used a DH to swing for Gouge on Tuesday, but he was stationed at first base on Wednesday and whacked two home runs at Rich Park to highlight a wild 16-6 victory.

Gouge scored four times and drove in four. The homers were his second and third of the season.

Rowan (30-7) won its 15th in a row and had 13 hits. Cole Johnson, Aiden Schenck, Luke Graham and Cameron Burleyson had two hits each.

Mocksville (10-19) played a terrific game on Tuesday, but made eight errors 24 hours later. Rowan (30-7) took advantage of all those extra outs to win its 15th game in a row.

Johnson’s sacrifice fly and Schenck’s RBI single got Rowan back to  3-all tie in the top of the third, but Mocksville answered with a two-run triple by Hunter Daywalt to go back ahead 5-3.

Rowan’s eight-run fourth changed everything. Rowan sent 13 men to the plate in that inning.

Gouge started it with a single against Mocksville starting pitcher Darren Shore. An error allowed Rowan to tie the game at 5-all.

Bunt singles by Graham and Burleyson put Rowan ahead 6-5 and turned the lineup over.

Jackson Deal’s sacrifice fly made it 7-5. After another error allowed a run to score, Gouge socked the three-run homer that broke the game open at 11-5.

Blevins made it through four innings, exiting with an 11-6 lead and was credited with the win.

Schenck singled home a run in the fifth for a 12-6 lead. Gouge belted a solo homer to open the sixth.

Rowan kept scoring, getting additional runs on RBI groundouts by Johnson and Burleyson. Elijah Palmer got a run home on an HBP.

Rowan will await its next opponent — Stanly County or Eastern Randolph. Stanly leads that quarterfinal series 1-0. Stanly won 7-6 Tuesday. Those teams were washed out at Stanly on Wednesday.

Kannapolis swept its series with Davidson County, winning 6-5 on the road on Wednesday and ending the game and the series on a pickoff play. Ty Hubbard smashed a three-run homer. Isaiah Black drove in two runs.

Randolph finished off a dominant sweep of Mooresville with a 9-0 victory.

The semifinal series for Rowan is the biggest one and will be best-of-five. It will start at Newman Park on July 16.

Both Area III semifinalists qualify for the state tournament to be held at Campbell University.