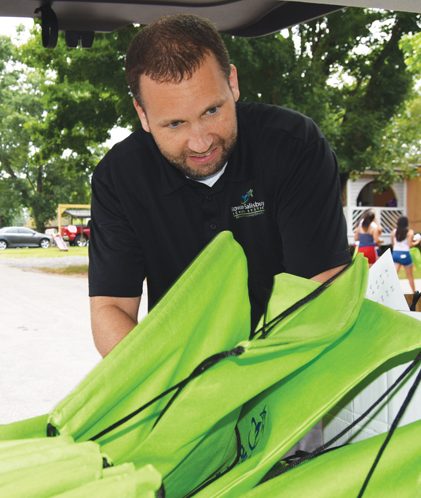 Jason Gardner, who was then director of elementary education, hands out books as Rowan-Salisbury Schools started its Summer Meals Program in 2018. Rebecca Rider/Salisbury Post

SALISBURY – Jason Gardner is going home to Mooresville Graded School District to become its next superintendent.

Gardner, Rowan-Salisbury Schools’ interim superintendent, had served as the district’s chief academic officer and has been leading RSS since former superintendent Tony Watlington departed for Philadelphia in April.

Gardner said it was a natural move for him since he lives in Mooresville with his family and previously served as an administrator there. He said being a superintendent is an intense job and the move will help him spend more time with his family.

“It was the only job I would have pursued,” Gardner said. “It’s where I live. It’s where my kids go to school. It was just the perfect situation for me and my family. You know the superintendent job is demanding, so being part of their lives is hard. Having a chance to work in the school system where they go to school is really what made me pursue it.”

Gardner said the move has nothing to do with circumstances from within the district and he was not actively looking for any position other than Mooresville.

“It was the right opportunity,” Gardner said.

He said he will miss working on renewal and being a leader in some of the district’s innovative practices. He said some of what he learned with RSS will be taken with him to Mooresville.

He started his career teaching for Iredell-Statesville Schools and became a principal in the Mooresville Graded School District before coming to RSS in 2016.

Gardner said his last day has not been finalized, but he has a 60-day notice obligation unless he and the district board agree on an earlier day of departure. The first day of classes is Aug. 10 and the school board is planning to close applications for the superintendent position at the beginning of August.

RSS Board Chair Dean Hunter said he thinks the board can have a permanent superintendent in place before Gardner leaves.

“Jason’s a good guy and he’s sought after,” Hunter said. “Of course he lives in Mooresville and he has students in Mooresville so this is a natural fit for him. I’m excited for him, but their gain is our loss, for sure.”