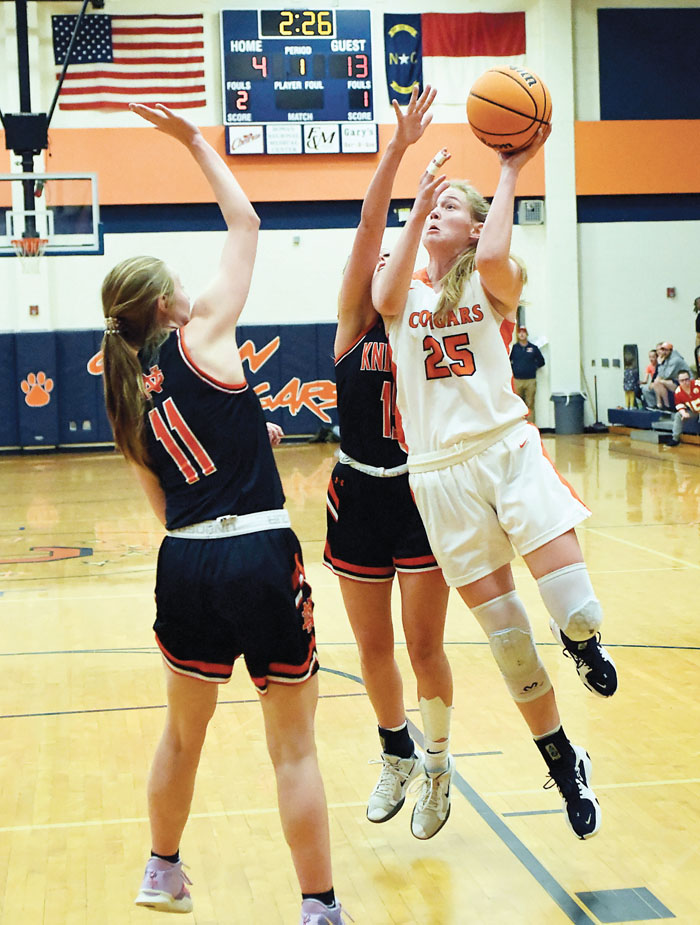 Carson’s Mary Spry shoots against North Davidson during a game earlier this year. Spry contributed five points, five rebounds, two steals and one assist in the East-West All-Star Game at Greensboro Coliseum on Monday. . photo by Wayne Hinshaw, for the Salisbury Post

GREENSBORO — Carson graduate Mary Spry’s last high school game had something in common with almost all of her games with the Cougars.

The West rallied to beat the East 62-55 in a wild East-West All-Star Game at Greensboro Coliseum on Monday.

Spry, a 6-foot Catawba signee, started the game for the West and contributed five points, five rebounds, two steals and one assist in 21 turnover-free minutes.

The West fell behind 17-9 after the first quarter, but got back within 26-25 at halftime.

The West slid behind again by 43-35 after three quarters, but dominated the stretch run.

The lead changed hands eight times in a see-saw game.

The MVP was Shelby’s Kate Hollifield. She made four of the West’s six 3-pointers and scored 18 points.

Guard Emily Hege, who led North Davidson’s win over Carson in the fourth round of the 3A playoffs, injured an ankle early in the game. She was able to return but was limited.

The talented Farmville Central duo that lost to Salisbury in the 2A state championship game — Amiya Joyner (6 points, 10 rebounds) and Journee McDaniel (8 points, 7 rebounds) — played well for the East squad.

Spry was the second player to represent the Carson girls program in the game. The first was McKenzie Gadson, who teamed with Salisbury’s Bryanna Troutman and South Rowan’s Janiya Downs in 2019.

A member of the National Honor Society at Carson, Spry plans an exercise science major at Catawba with the goal of a career in physical therapy.