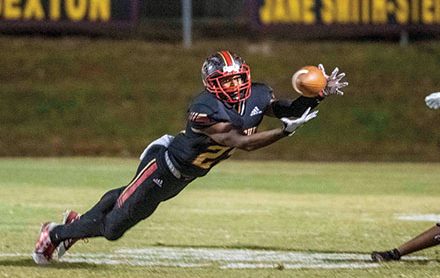 Marcus Cook dives for a pass on his way to being named Rowan County Athlete of the Year. JON C LAKEY / FOR THE SALISBURY POST FILE PHOTO. 10/29/21, Salisbury,NC.

SALISBURY — Salisbury High graduate Marcus Cook is a state champion and a record-setter, and those are two of the things at the top of the list whenever a Darrell Misenheimer Award is being handed out.

Misenheimer, a football, track and field and wrestling star for East Rowan in the 1970s and a coach for many years in Rowan County, set the bar high for all the athletes who followed. The award for being Rowan County’s top male athlete is given in his honor following every school year.

In the 2021-22 school year, Cook displayed the sort of versatility Misenheimer would have approved of.

While he broke receiving records for Salisbury football, there also were times when Cook made an impact as a defensive back or kick returner.

In track and field, he was best known as a state-level triple jumper but he also was proficient as a long jumper and sprinter.

Cook even found the time this spring between track meets and practices to help out the Salisbury baseball team, mostly as a base-runner.

Cook, who was used mostly on defense early in his varsity career, made 85 catches for 1,473 yards and 15 touchdowns for the Hornets. The receptions and yards are school career records.

He did that on a run-first team that running-clocked most opponents. The Hornets often were through throwing the ball by halftime. His season high for catches was seven (for 115 yards) against Maiden,which ended the Hornets’ season.

“I knew I might only get one or two chances to catch a pass, so I tried to make the most of every chance,” Cook said. “Mostly, I blocked as hard as I could. Getting records as a receiver was something completely unexpected. Growing up, I was always the running back or the quarterback.”

Besides the receiving touchdowns, Cook had an interception return for a touchdown, a rushing touchdown (he scooped a wayward pitch and took it 40 yards) and two punt-return touchdowns as a senior.

Cook isn’t large at 5-foot-11 and about 180 pounds, but his pounds are well-distributed. He’ll pass the eye test for any scout with muscular legs, thick arms and a tiny waist.

Those legs of steel carried Cook to the end zone frequently. “The biggest catch I ever made for Salisbury was actually my junior year,” Cook said. “The third-round playoff game with North Davidson, we’re down and we needed a big play, and (QB) Vance Honeycutt trusted me to make it. He threw a long one to me on fourth-and-long. Just put it up there like I wanted him to do. Their dude tipped it, but I came down with it, and there was no one between me and the goal line. That tied it, our defense stopped them, and we won the game on a field goal. We all end up with a ring.”

While Cook was part of a football team championship in the spring of 2021, he captured solo gold as a senior, winning the triple jump in February’s 1A/2A Indoor State Championships at the JDL Fast Track in Winston-Salem.

“You walk into that place and it’s so nice, it’s so different that it’s easy to lose focus,” Cook said. “No wind and nice and warm and you feel like you can go higher than you ever have. You start looking around at everything that’s going on, so it’s hard to stay in the moment. You’re there for a purpose, but it’s not easy to concentrate in that atmosphere.”

Cook, who competed for coach Todd Parker, got his mind right and had a strong first jump.

Then Southwest Edgecombe’s Princeton Loch jumped 43-9 late in the competition, and Cook suddenly slipped to second. It was a roller coaster of emotions for him.

“That dude came out of nowhere. I think he’d been in some running events, and then he topped me,” Cook said. “I’m thinking, ‘Dang, I just lost my state championship.’ ”

Fortunately, Cook had one more jump, and with Parker’s help, he got recharged. He made that last chance count. He soared 44 feet, 11 inches to take first place.

Parker described it as “the perfect jump,” and it came with the pressure on. That said a lot about Cook.

“Definitely a great feeling to win state,” Cook said. “But it still wasn’t as great a feeling as I had when we won the football state championship as a team. Those are guys I’d bonded with as brothers since elementary school, and the state championship is something we’ll always have. A team championship just feels better than winning as an individual.”

The Rowan County champion in the long jump (20 feet, 10 inches) as well as the triple jump (45-8.5) as a senior, Cook also enjoyed team success in the sprint relays.

In the 2A State Championships outdoors in Greensboro, Cook wrapped his career with a runner-up finish in the triple jump (44-0-,75) and team with Andrew Huffman, Mike Geter and Jamal Rule on a 4×400 relay team that placed fifth in 3:32.61.

Cook was named the Central Carolina Conference Male Athlete of the Year.

He works out every day at the school and among other things, he mentors some young jumpers. Future state champs, he hopes.

It’s getting late in the game, but Cook is still undecided about what’s next. He said he has Division II and Division III possibilities. Ideally, he’d be able to go to a school where he could compete in football as well as track and field.

“Marcus is one of the most talented, gifted kids you’re ever going to find,”  Parker said. “And on top of that, coachable. He’s got a great attitude. He’s always smiling, always upbeat.”