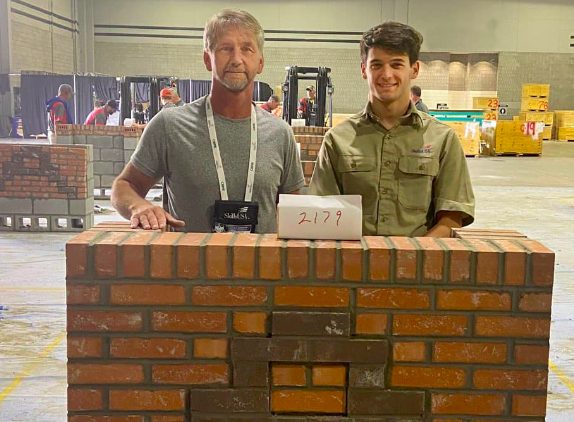 Pruett graduated in May and competed in the high school category at the Atlanta competition, coming out on top against other finalists from Ohio and Pennsylvania.

The time limit on the builds for this competition was six hours, compared to the three-hour projects at the state competition. Pruett won that contest, too, and several of his classmates placed highly.

Pruett said six hours seemed appropriate for the project, which included an “A” representing the host city built into the center of the bricks. There was a half-hour lunch break for contestants three hours into the contest. He said he slowed down significantly for the second half of the project to focus on the details and started to worry he would run out of time.

“I planned all year for winning at the state level, going to nationals and achieving a national title,” Pruett said. “I feel like all my hard work has paid off.”

Pruett said the competition was different from the state contests because there were competitors from all over the country.

Another West Rowan graduate, Grant Helms, was also a state and national winner earlier. Helms graduated in 2020 and won the state in May of 2021 and went on to win two national competitions in Las Vegas that year.

Pruett is on vacation now, but when he comes back he is expecting to start working with Helms Masonry.

Pruett credits the success of the program to West Rowan masonry teacher Rodney Harrington, calling him the best masonry instructor in the state.

“He pushes us to a new level and I think part of it is people like Grant and me can take the constructive criticism,” Pruett said.

Harrington went to the competition with Pruett.

“Like I told him, ‘You just accomplished something one in 2 million might ever get a chance to do,’ ” Harrington said.

Harrington said the project at the competition was tough for a lot of the students. “It required a touch, that’s for sure,” Harrington said.

But Harrington said the competitions are about more than just winning: he wants to teach his students life skills and a trade they can take with them to earn a good living.

“He’s got masonry contractors across this area recruiting him,” Harrington said.

Harrington said demand is high for masonry work and the trade can be lucrative for people who want to put in the work.