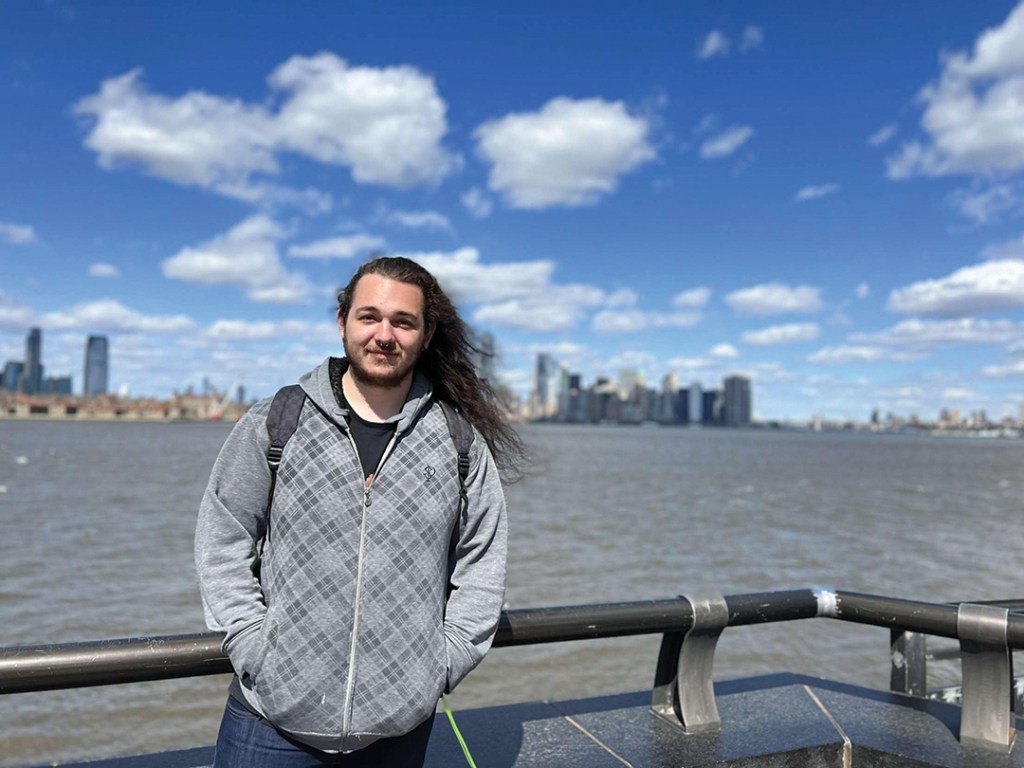 Submitted photo: Alex Pate in New York City, one of the many travel adventures he pursued.

SALISBURY — In today’s world, it is often easy to get caught up in a bustling era that’s constantly changing with uncertainty for what’s to come next. For Alexander “Alex” Pate, who died after his car struck a telephone and tree on Sherrills Ford Road in Salisbury, he let his free spirit lead him through an life of passion, travel and creativity that left a mark on those who knew him.

Sam Barr was one of the first people to connect with Alex when he was in the third grade at Hurley Elementary School. While they didn’t go to the same middle or high school, they stayed friends and made sure to keep close.

“One of my favorite memories with him was really just sitting and playing Skyrim (video game) together in high school,” he said. “It was our escape from school and life. He would get really into the lore and tell me all the secrets.”

He would go on to tell about Alex’s encouragement and comfort, as when Sam came home from college in 2021, Alex saw that he was burnt out from job searching. It was around this time that Alex had moved in to live with Sam’s parents.

“Alex asked if I would go to the gym, but I just told him no,” said Sam. “He wouldn’t stop asking for several weeks so I ended up going and then I never stopped. He showed me how to use all the machines and some workouts and now I really like it. I still do and I know he wouldn’t want me to stop.”

Alex went to West Rowan High School with Amber Talbert, who shared her experience of the support he had for the friends he met when attending. She was a freshman when they met while he was in his last year as a senior.

“We both had several failed relationships when we were in school so we made a pact with each other,” Amber said. “So around 2014 to 2015, we decided if both of us were still single and alone in 2030, we would get married.”

The agreement was something Alex often brought up as the years went on, reminding Amber that 2030 was getting closer. Even after graduating, he continued to support his friend in her school activities.

In 2017, she performed a flag twirling routine for their school talent show in honor of her late mother, who died in January the same year. Amber still remembers where he sat in the audience and knew it would be a special moment for her.

“We didn’t see each other a whole lot after high school,” she said. “But we stayed connected through social media. It was one of those friendships that we could go weeks or months without talking and still pick up where we had left off.”

Alex’s interest in storytelling and connecting with people would take him on the journey of obtaining his bachelor’s degree in creative writing at Full Sail University in Florida. During this time, he moved briefly to Los Angeles to sell scripts he had written for horror entertainment. According to Sam and Carli Ashcraft, Sam’s girlfriend, Alexander was a jack-of-all-trades with interests in journalism, poetry, writing and acting.

He continued to pursue his studies and interned with the Drunken Odyssey podcast at his university. This opportunity led him to a feature in the episode “423: Protest” to talk about his experience at Salisbury’s Black Lives Matter protest in 2020.

“He was very honest and so intelligent,” Carli said. “He had such a way with his words.”

The two met at Alexander’s going away party in 2020 when he was leaving to go to England for his postgraduate education degree. According to Carli, he loved the innocence in children and wanted to impact them positively and be a mentor.

“A lot of children he taught grew up in bad situations and he wanted to be there in their lives,” she continued.

Alex worked as a built-in substitute teacher at Hurley Elementary School when he returned to Salisbury in the early fall of 2021. It was here that he began to gain experience for his dream to teach abroad.

“He was always very nice and offered to help in any way,” said third grade teacher Kelley Spears. “He just had this energy around him and a true passion for what he did.”

She went on to tell about the excitement children had for him, as they would always as for Mr. Pate when Spears would announce they would be having a substitute on certain days.

According to Spears, Pate made it a point until the last day of school to help his fellow teachers by stopping in classrooms and offering to help. It was also in him to make sure the classrooms were inviting and decorated.

But it wasn’t only teachers. Hurley Principal Jennifer Brown shared that Pate would stop by her office every afternoon before he left, asking her if she needed anything before he would go home for the day.

“Mr. Alex Pate worked for Kelly’s Services which led him to be a full-time substitute teacher at Hurley Elementary,” Brown said. “He was with us every day serving our students faithfully. Alex was dedicated and kind and he would do absolutely anything he could to support a student or a teacher.”

He was in the House of Convictioni at Hurley which honors and celebrates the unique gifts of others, according to Brown. The program had each student and staff member in a different house with the purpose of including others. Every week, the program hosts contests and activities that Pate would go above and beyond in participating with his house, according to Brown. Additionally, he would stay after school hours for 30 minutes every Friday to attend the weekly shoutouts for staff members and students, even mentioning those he thought should be recognized.

“He had a heart of gold,” said Adrianna Ewart, another friend of Alex. “Starting as my best friend, he grew into more than that. He was family. From the huge comforting bear hugs he gave me when I was sad, to bringing me flowers when I was sick, to eating sandwiches at my grandma’s house. He showed love unconditionally and he will forever be missed.”

Alex was cared for by Linn-Honeycutt Funeral Home in China Grove and was put to rest at Rowan Memorial Park on Monday.