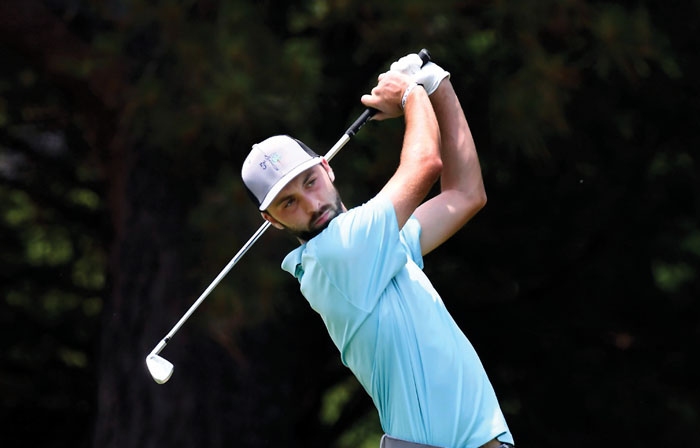 Nick Lyerly tees off with an iron in the Rowan Masters Tournament. photo by Wayne Hinshaw, for the Salisbury Post

Lyerly spent Monday gearing up for the prestigious North & South Amateur Championship that will be played on Pinehurst No. 2 and No. 4 this week.

“This is one of the big ones,” Lyerly said. “Most definitely.”

The North & South is a golf tournament with as much tradition as anyone could ever ask for. This is the 122nd edition of the event.

Jack Nicklaus won it. So did Curtis Strange, Davis Love III and Corey Pavin. Even if you’re not old enough to know about Billy Joe Patton, Joe Inman Jr. and Dale Morey, the list of champions is distinguished.

Teeing off for stroke play on Tuesday and Wednesday will be 120 elite amateurs, some of the best in the world. Only 32 will advance to the match play portion of the event. It’s going to be a rugged assignment, even for Lyerly, who has soared as high as 47th in the World Amateur rankings.

Lyerly, an Honorable Mention All-America and the pride of UNC Greensboro and the Southern Conference, got ready for this supreme test in Pinehurst by playing more golf. It was a local weekend tournament — the 19th annual Rowan Masters at Warrior.

Lyerly won it — won the title for an unprecedented fourth straight time — but it turned out to be better preparation than you might think.

“The matches in the Rowan Masters weren’t just pretty good,” Lyerly said. “They were tough. Had to bring my best. Those last three matches, if I shoot par, I don’t win. That’s good golf.”

There’s a bit of pressure on Lyerly when he plays in local tournaments.

If he wins, well, he was supposed to win because he’s Nick Lyerly. If he ever loses, people will want to know what in the world went wrong.

But he handles it all gracefully. He wins humbly, and if he ever does lose one, he’ll handle that smoothly, too. He’ll shower praise on whoever managed to beat him.

Lyerly won the NCHSAA 3A state championship as a 16-year-old East Rowan Mustang playing for coach Rhett Teems. Six years ago, he won the North Carolina Amateur when he was 17. He was the youngest winner ever in that event, and that stunning success stamped him as a phenom, one of the best to come out of Rowan County.

He lived up to all the teenage hype at UNC Greensboro and successfully weathered the COVID years on the course and in the classroom. Now a seasoned, bearded graduate student, he plays on a national level and wins his share of tournaments. He was consistent enough in 2022 to post a stroke average of 69.

But Lyerly still enjoys competing back home against guys he’s known a long time. Some of them he looked up to when he was growing up. He likes to play Corbin Hills, his home course. He also likes to play Warrior, where the pro, Brian Lee, has done a lot to help Lyerly craft his efficient game.

Lyerly, 23, felt like an old-timer in his first Rowan Masters match on Friday. His opponent was a teenager. McGwire Owen, a recent West Rowan graduate, was a late addition to the field as the 32nd seed, but Owen didn’t play nervous going head-to-head against Lyerly. The match lasted 14 holes, which meant Owen played his tail off.

Lyerly won with relative ease against Sean Kramer in the Round of 16 on Saturday morning. Kramer, a former South Rowan star, is a regular contender in the local tournaments.

Lyerly’s quarterfinal match on Saturday afternoon against Kevin Lentz, one of the most consistent locals and a frequent runner-up in the Rowan Amateur, went 17 holes. Lyerly finally put away Lentz 2 and 1 by making an eagle to top a Lentz birdie.

Lyerly’s semifinal opponent on Sunday morning was a surprise — Carson High rising senior Cade Cranfield, who had knocked off some big names as the 20th seed.

Cranfield didn’t back down against Lyerly. After Cranfield made a birdie on No. 10, the kid was 1-up.

The 13th, a par 5 that is the Warrior’s longest hole, was the turning point.

Cranfield was on the green in two after a pair of textbook shots, putting for eagle and certain to make birdie. Lyerly was short of the green and in danger of going down two holes.

“But I chipped close enough for a tap-in birdie, a really good up and down, and Cade two-putted so I was able to halve the hole,” Lyerly said. “That was a great halve for me. I got some momentum.”

Lyerly got rolling after that, got level with Cranfield on the 14th, and then took the lead with a birdie on 15.

Lyerly won the 16th with a par to go 2-up and closed out Cranfield on the 17th.

“Definitely had to earn it,” Lyerly said. “Cade impressed me. He played really well.”

In the other semifinal, William Little, a burly bomber who can mash off the tee, outlasted Harry Walch, a newcomer to local golf. Walch is an Englishman who played college golf in Texas and now has relocated to Denver, N.C.  Lee praised Walch’s temperament and his shot-making, and believes he’ll be someone to watch in future tournaments.

Lyerly’s match with Little for the championship proved to be a classic.

“On holes where we’re hitting drivers, he was going to out-drive me,” Lyerly said.

The match see-sawed on the front nine. Lyerly went 1-up with birdies on 4 and 7. Both times Little answered right back to get even. They were deadlocked after eight holes.

The wheel of momentum finally rolled Lyerly’s way on the 9th, a short par 4 playing about 340 yards from the championship tees.

Little’s mammoth tee shot didn’t leave him far from the green, while Lyerly’s tee shot had come to an unfortunate rest behind a tree, and he was about 60 yards shy of the green.

“Where William was and where I was, I’m going to lose that hole nine out of 10 times,” Lyerly said.

But this was that 10th time. Lyerly punched out superbly from that poor lie, putting the ball about 20 feet from the cup. Then he nailed the long birdie putt.

Little missed his putt for birdie, and instead of being down one, Lyerly was up one. Huge swing.

He took it from there. He won the 11th with a birdie for a two-hole lead.

“Got a break on 11,” Lyerly said. “My tee shot bounced right through a bunker. Then I was able to chip close and make another birdie.”

Lyerly rarely makes a bogey. After a string of pars, he finished off Little 4 and 2. Lyerly was 6-under after 16. Little was 2-under.

Lyerly did what he does best to win his fourth straight Rowan Masters. He’s a slim, 5-foot-11 and there are more powerful guys who are going to out-drive him, but his irons and short game are elite.

If he does big things at the North & South Amateur this week, he’ll have some people to thank — Owen, Kramer, Lentz, Cranfield and Little. They pushed him. They kept him sharp.

Lyerly will also be in the field for next month’s Horace Billings Rowan Amateur at Corbin Hills. He’s won that event five times, including the last four in a row.

As far as the future, Lyerly still has a year of eligibility at UNC Greensboro and plans to use it. He already has earned a degree in biology. By the end of the 2023 school year, he’ll hold a masters degree in exercise physiology.

He says the academic side of things now is much less demanding of his time than his hectic undergraduate days. He’s having fun on and off the course.

Will he take a shot at professional golf at some point? He’d like to have a dollar for every time someone has asked him that.

“It’s a possibility,” Lyerly said. “But that’s a decision that won’t be made until next spring. Let’s wait and see how my last year of college golf goes.”