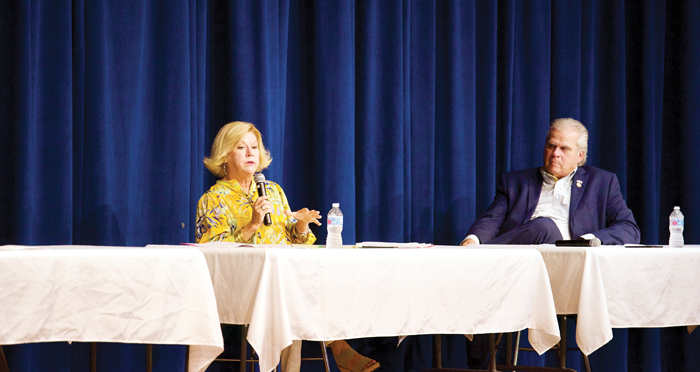 GRANITE QUARRY — Several Republicans from around the state came to Rowan County to talk about the future of education in North Carolina on Saturday.

Torbett is the chair of the House Select Committee on Education. As a primary sponsor on what Torbett described as a “CRT bill,” on Saturday he spoke about a “Parents’ Bill of Rights” that has been compared to Florida’s “Don’t Say Gay” law.

Mills is a Rowan County native and a teacher in Sampson County.

Kirk is also a Rowan County native and a Catawba College graduate who has held a several state positions, including serving as a state senator.

Local GOP Chairwoman Elaine Hewitt opened and moderated the panel. She noted five Rowan-Salisbury Schools Board of Education seats are open during this year’s election, up from four because Lynn Marsh’s seat is up for a two-year term rather than four. Marsh was appointed to serve until the upcoming election in September of 2021 after Susan Cox resigned the seat to move closer to family in Guilford County.

Later in the meeting, Torbett encouraged people to be active attending school board meetings and voicing their concerns.

Torbett said educators cite compensation as a reason to get into administration and said adding leadership positions like executive teachers would give educators the ability to earn more and still exercise administrative powers over a school while turning over day-to-day building management and logistics to other staff.

Mills noted her agreement with cumulative assessments and Kirk said he likes the idea of taking educators out of logistics.

Kirk said the state loses its best educators to the private sector or they become principals. “I’m tired of losing the good teachers out of the classroom,” he said.

The panel also touched on critical race theory. Mills said the popular Republican talking point has “taken on a life of its own” and complained about companies using language about racial equity. She noted a question on a Panorama Education survey allowed students to write in their gender rather than choose male or female.

She said the color of a student’s skin would not determine their success in her class.

Kirk recounted a claim from a teacher in Robeson County who told a student that Republicans did not vote for former president Barrack Obama because of racial bias.

Torbett described his involvement drafting an anti-CRT bill, but noted the bill says nothing specific about the theory and said “we will teach the horrifying history of this country.”

He pointed to examples like the history of American slavery and the loss of life during the battle of Iwo Jima.

Torbett claimed that growing up he did not know about the concept of racial diversity or the difference between rich and poor kids until someone told him.

“They were just kids, they were my friends,” Torbett said, adding the focus needs to be on educating children and the U.S. should be ranked highly among all nations in education.

In 2021, the Post addressed a reader question on whether critical race theory, which is seeks to examine U.S. history through race and racism, is taught in local schools.

Jason Gardner, current RSS interim superintendent who was then chief academic officer, said the district has never discussed the theory as part of the district’s curriculum and he was unaware of the subject even being discussed by the state’s curriculum team.

“We follow the state curriculum.” Gardner said at the time.

Touching on school safety in the context of the mass murder at Robb Elementary School in Uvalde, Texas, last month, as well as assaults by students on teachers and other students, none of the panelists spoke about gun control or said the word gun.

Kirk said he supports metal detectors and entrance security, noting the RSS board is planning to replace Knox Middle School and one of the issues with the facility is the large number of entrances on the open campus.

• Kirk credited state superintendent Catherine Truitt for her focus on implementing the science of reading across the state, pointing to a case study of Mississippi making a massive jump in its student literacy rate after implementing the program.

• On learning loss during the COVID-19 pandemic, Mills said she can see low reading proficiency in her students entering high school, said issues remain with low attendance, students who do not have parents involved and those who have trouble getting to school every day.

She said schools are spending too much time on surveys and “other things” instead of teaching.

“Take that 30 minutes and work on reading,” Mills said. “Do things that the students need, because if we don’t, nobody else is going to.”

She also touched on the value of after-school remediation programs.

• On teacher turnover, Torbett said the issue is compensation and the state needs to pay teachers as professionals, as well as change the idea teachers have to go into administration to make more money.

• On teacher unions, Kirk said the N.C. Association of Educators does not represent all teachers. Torbett said there were socialist elements in the Red4EdNC rallies in Raleigh, as well as anti-police sentiment. He claimed socialism is not “loosely thrown out.”