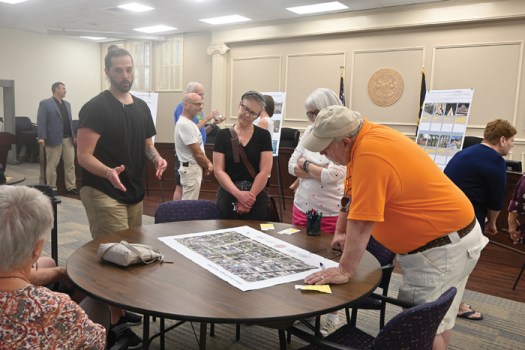 Madeline Wagoner/Salisbury Post — Downtown Salisbury business owners and homeowners gather over an aerial view of East Fisher Street to discuss what needs to be done to the historical bridge. 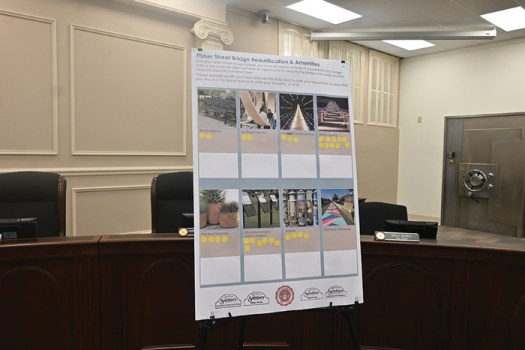 Madeline Wagoner/Salisbury Post — Planning and public works use interactive poster boards to gather public opion for how to move forward.

SALISBURY — Community members gathered Thursday in City Hall for an interactive discussion with planning and public works officials for a presentation on the future of the East Fisher Street bridge.

According to Community Planning Director Hannah Jacobson, what people have to say about the options will be presented to City Council in August to show how they would like to move forward with reviving the historic bridge.

Poster boards outlined the ideas and goals put together by the city, including reopening the bridge for vehicular traffic in two years or turning it into a pedestrian bridge with added design features as a safe gateway to downtown. Posters had blank squares for people to place a sticker under the option they liked best, including what additions they would like to see in the finished product.

Public Works Director Craig Powers said the pedestrian option could open more opportunities for tourism in Salisbury as it would renovate the bridge while offering an option to walk downtown to support businesses.

“Bridge permits take a long time to obtain,” he said. “As far as repairing the bridge, a vehicular bridge would require more frequent maintenance. If you have bikes and people, it wouldn’t need it as often.”

A pedestrian bridge could also include bench seating, public art, festive/colored lights, planters and greenery, educational signs and historic markers, ballards and painted pathways. New lights got the most votes, while painted pathways only had one.

Jacobson said ultimately City Council members will have the last word for the bridge’s future, but the community can help them make the best decision.

Another poster board was designated for public comments on how closing the bridge has affected residents. Some people said it helped ease traffic on Fisher Street; others noted it has been difficult to make deliveries and that East Bank Street traffic has built up.

Acey Worthy, a property owner on East Bank Street, said it wouldn’t bring in tourism like the city is hoping due to lack of parking and who is coming to the area.

“If a mom wanted to take her daughter to the bridge, she’d have to park in front of Autozone,” he said. “To get to downtown, she’s not going to cross this bridge.”

While voting for either option was split down the middle, with eight votes on each proposed idea, several people voiced that they would like to see the bridge transformed for vehicular purposes.

“The idea is great, but as it’s gone on, it’s only gotten worse and worse,” said Jeremy Tatum, another property owner on East Bank Street. “I see the light at the end of the tunnel, but is there really a light, or will we be hitting a brick wall?”

A community member wrote on the comment poster that making it a pedestrian bridge would help with safety, by limiting the streets with cars.

“These beams have to be custom-made into almost a C-shape to fit the bridge,” Powers said.

Once City Council makes a decision, planning and public works will apply for grants and gather estimates before moving forward.