‘A second round of your talents’: Outgoing interim city manager Brian Hiatt given key to city 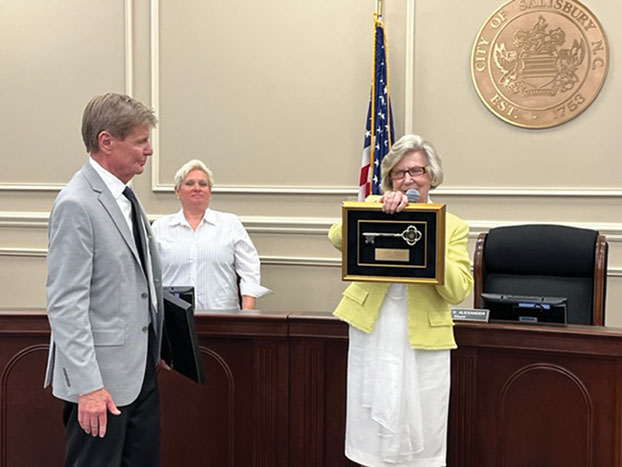 Mayor Karen Alexander presents outgoing interim city manager Brian Hiatt with a key to the city. Photo submitted by the City of Salisbury.

SALISBURY — When the City of Salisbury began searching for an interim city manager to fill the gap after Lane Bailey’s retirement at the end of last year, Mayor Pro Tem Tamara Sheffield knew just the person for the job.

Sheffield was referring to Brian Hiatt, who served as Salisbury’s interim community planning director for five months in 2018 after retiring following a 19-year tenure as city manager for Concord.

Sheffield got her wish.

Hiatt was brought back for the interim job and served as city manager until Jim Greene Jr. took the helm in May. When Hiatt started in the temporary role, he told the Post he wanted to “keep the car in the road” until the city brought in a permanent replacement.

According to the members of the city council, he did more than that.

“One of the things that a lot of public servants like to say or corporate leaders like to say is they like to leave a place better than when they found it, and you’ve done that twice,” Council Member David Post said. “We’re all grateful for that.”

For his two stints with Salisbury, Mayor Karen Alexander and city council on Tuesday bestowed Hiatt with a key to the city.

“Thank you for giving us a second round of your talents,” Sheffield said.

Hiatt said this is the first time he’s received a key to the city, despite spending about 42 years in local government.

“I am certainly honored and humbled by all of this,” Hiatt said. “When you leave an organization full of great public servants you will miss them.”

Greene, who has known Hiatt for more than two decades and worked with him at the City of Concord, said Hiatt is “a great man with the highest of ethical standards and a big heart.”

City Attorney Graham Corriher spoke highly of Hiatt’s leadership. “It’s been very important during this period of growth that we’ve experienced to have somebody that’s experienced that growth from where he came from in Concord to lead the ship. And not just to keep it in the road as he claimed to do, but solve the problems that needed solving.”

Council Members Anthony Smith and Harry McLaughlin, both serving their first terms on council, also thanked Hiatt for his guidance.

“You meet people and they have the wisdom to do things in their body, like it’s just a part of them,” Smith said. “I appreciate the way you’ve brought that wisdom to, especially those of us who are new to this work because honestly it’s been like drinking from a fire hydrant for the past couple of months.”

“Brian was able to come in and take the time and really rein you in and help you with that transition from being in campaign to being a city council member,” said McLaughlin, who added that he’s particularly grateful for Hiatt’s patience.

Leaving Salisbury for a second time, Hiatt said the city is “in good hands.”

“You’ve hired an excellent city manager, and I know because I’ve seen him.”