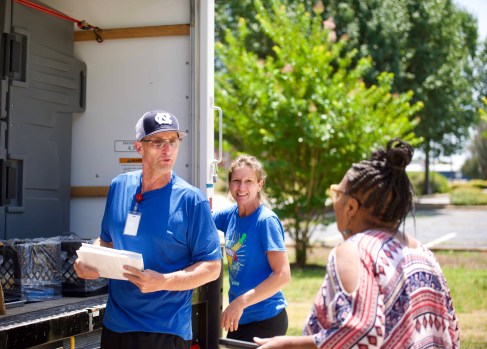 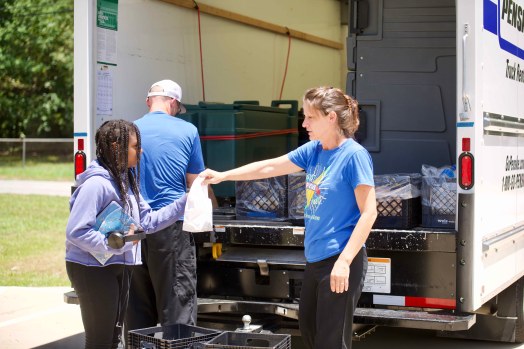 Carl Blankenship/SAlisbury Post - Southeast Middle Nutrition Manager Tammy Boger handing off a meal to a student at a summer camp. 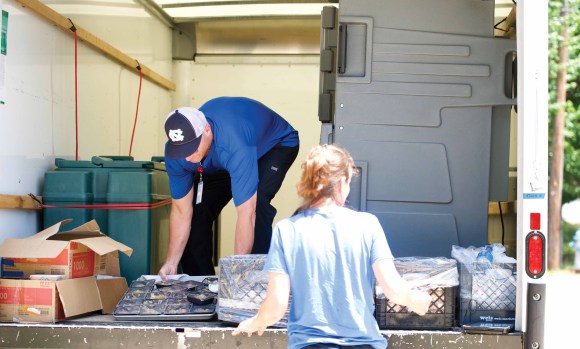 SALISBURY — In 2020, school nutrition went for a ride.

Rowan-Salisbury Schools delivered tens of thousands of meals each week for the last quarter of 2020 after schools were ordered to shut down. The delivery bonanza kept going during the summer, and the district’s nutrition department kept leaning into every federal waiver that came out of the pandemic to distribute meals in ways it would not be allowed to under normal circumstances: delivery, drive-thru pickup and packs of meals that lasted several days.

There were waivers that let the district turn yellow school buses into food-laden ironclads spreading meals throughout neighborhoods where the pandemic cut off incomes, for free.

More than two years later, what is left of those waivers are about to expire. The school nutrition world is looking like it did before COVID-19, but one delivery model is normal and sticking around.

RSS delivers meals at no cost to students every summer, and it started doing so again in June. There are some old rules coming back to the program. Meals have to be eaten at the delivery site, rather than the old rules that let them pick them up and take them home. The waiver for that part of the program runs out at the end of June, so the department opted to make the switch now rather than confuse people halfway through the summer.

“That’s made it a little challenging,” Nutrition Director Lisa Altmann said. “For the last two years they’ve been used to grabbing their food and going home.”

Altmann said the the participation numbers are a bit lower than usual, but the district’s summer programs, which provide students with lunch, ends on Thursday.

“We’re looking to see an uptick on our numbers out at the buses and trucks,” Altmann said.

All the summer meal deliveries operate out of two kitchens this year. So far the program is feeding about 1,000 breakfasts and about 1,500-1,800 lunches.

The program has a new addition. The summer meals program’s iconic Yum Yum Buses that function as all-in-one dining rooms for some sites are joined by a new box truck, dubbed the Yum Yum Truck. Shelves on the sides of the truck can be lowered and turn into tables and air conditioning on the truck can be funneled into the back. The district had it wrapped to match the buses.

South Rowan High School Nutrition Manager Joe Harris was out on a meal truck Tuesday. He said the summer program is the most rewarding part of his 15-year career in school nutrition.

He gets to interact with the kids and sees their excitement at getting food. Some are just thankful for the meal and, for the most part they are excited by the food they get, with a few exceptions. Harris said one student rolled their eyes at Tuesday’s barbecue menu, but pizza day is always a hit.

He has been working summer programs for 12 years, and the most impactful part of the experience is seeing where students live.

“They go through hardships I didn’t have to go through when I was growing up, so it reminds me why we do what we do during the school year,” Harris said.

Harris said his first two years working on the summer meals program he was on a route serving meals to students at YMCA locations and churches. The number of students they fed was big and he enjoyed it, but the students at the summer camps were more affluent than some of those he serves in poor neighborhoods along the routes he picked up later.

He said when he started his new route there were murders near some of the sites they were bringing meals to the next day or next week.

“It was, by far, more rewarding than anything I did on any other trucks,” Harris said. “I got to see a whole different side of how people live and what they deal with. It gave me a better appreciation for what the students that I feed during the school year deal with.”