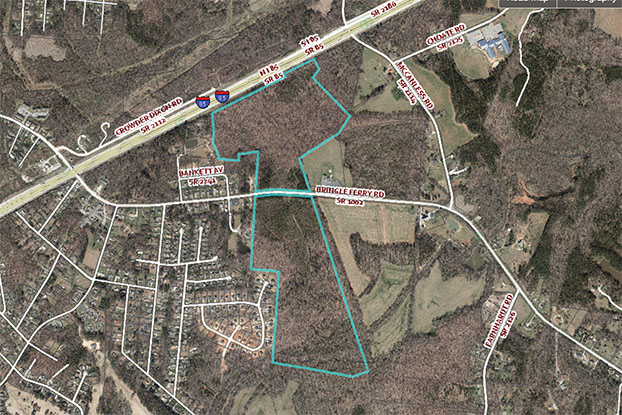 Salisbury and East Spencer have formed an agreement that will East Spencer to annex the property outlined in blue on this map. An unnamed developer is expected to purchase the property. Salisbury-Rowan Utilities will service future development on the property.

SALISBURY — The City of Salisbury and Town of East Spencer have reached an annexation agreement on a 130-acre tract of land on Bringle Ferry Road near I-85.

An unnamed developer currently has an option to purchase the property, which is bisected by Bringle Ferry Road. That developer has voluntarily offered to have East Spencer annex the parcel. The property is located within East Spencer’s extraterritorial jurisdiction, or ETJ, but is adjacent to Salisbury’s city limits. As a result, East Spencer is required to obtain permission from Salisbury before it moves forward with absorbing the property.

East Spencer Town Administrator Michael Douglas previously told the Post his request for an annexation agreement with Salisbury was met with resistance because the city appeared interested in adding the property. Since then, the two sides have reached a compromise.

The city is allowing East Spencer to annex the property, according to the agreement presented to city council on Tuesday night by Salisbury City Attorney Graham Corriher.

Council Member Anthony Smith said “this is an agreement between two municipalities after much back and forth and dialogue.” Mayor Alexander added that it was “wonderful” the city and East Spencer could come to a joint resolution.

City council seemed to be on board with approving the agreement on Tuesday night, but an official vote won’t come until June 29 because statute requires that a public hearing on the matter must be advertised for 10 days prior.

Time is of the essence because the developer’s option to purchase the property is slated to expire on July 7.

Council will meet at 6:30 p.m. June 29 at City Hall, 217 South Main St. The meeting will be held in a hybrid format and the public may attend virtually by using this link: https://bit.ly/3b23wbb. The meeting will also be streamed live at salisburync.gov/webcast and on the City’s Facebook account.

The East Spencer Board of Aldermen will also have to approve the agreement for it to become effective. The board is scheduled to meet on June 29 to approve its 2022-23 fiscal year budget and vote on the agreement as well.