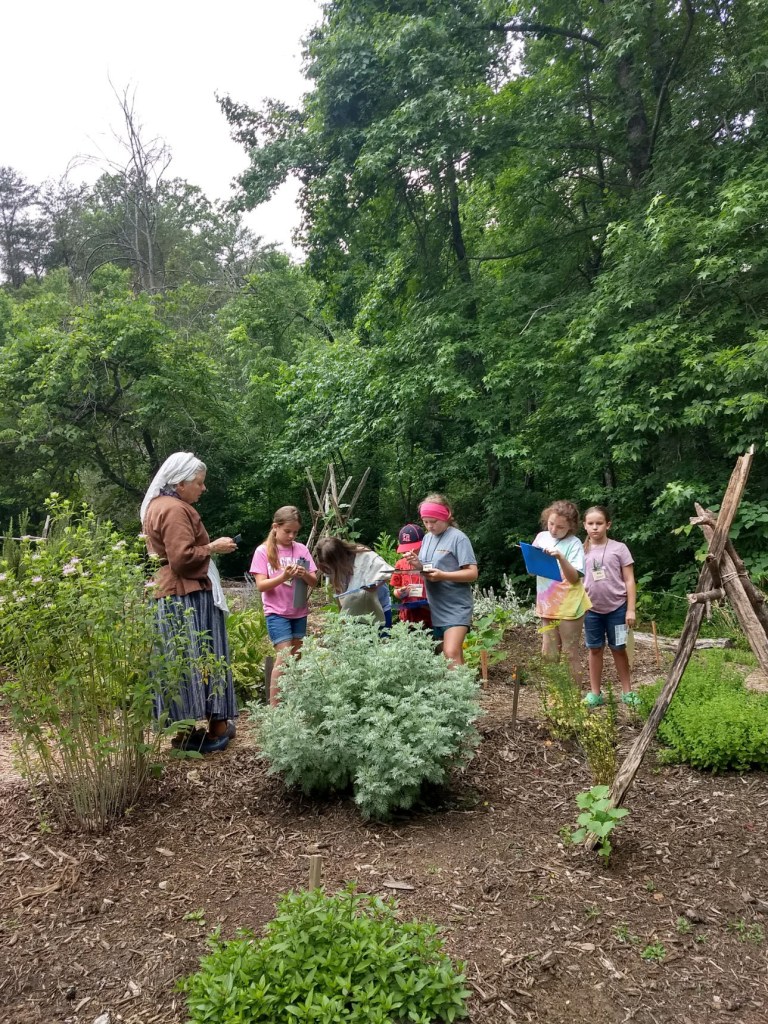 Submitted photo - Students in the garden at the Old Stone House.

SALISBURY — Rowan Museum kicked off its history day camps this month with a dive into history at the Old Stone House.

“Pickled peaches anyone?”Amy Pruitt asked a group of students at the Old Stone House. Pickling was an important way to preserve food in the 1600-1700’s. Several students stepped up to try the spicy treats and were surprised by the delicious taste.

They were also served fresh bread with a choice of butter and strawberry preserves. This was a chance for students to taste history while they learned about colonial life. The camp was the first of a series of five this summer.

The students received colonial market wallets to keep their belongings in. These included herbs for seasoning food, hygiene and healing. Pruitt led a tour for the the campers collected flowers, lambs ear and other fresh plants.

The students were able to handle period tools and learn about their uses. They took turns using them in the garden and around the house.

In the 1600-1700’s bathing was rare and either took place in a creek or shared water. To freshen the air around you, people made Tussie-Mussies. These bouquets fragranced the air and masked the ever-present body odor. The bouquets could be placed around the house or carried in hand. The campers tied theirs with twine.

Living historians, Janet Pyatt and Nancy Gaines taught the students how flax is processed into linen. The campers gained hands on experience weaving on various types of looms. The demonstrations included scutching, heckling and spinning. Campers witnessed the transformation from hard fibers to soft hair like threads. Additionally, Janet taught what to wear and why clothing as campers modeled caps, hats and kerchiefs.

Candle dipping was led by museum volunteers. The tedious process of dipping individual candles helped the campers gain an appreciation of modern-day electricity. This was followed by demonstrations presented by Revolutionary War militia Ben and Mason. The students learned about the impact of war here in Rowan County.

The day’s lunch included chicken baked on a fire, mashed sweet potatoes and salad the campers helped prepare with watermelon for dessert.

The meal was inspired by “The Receipt Book of Harriott Pinckney Horry, 1770.” Recipes were called receipts in the 18th century.

After lunch, the campers got back to work earning colonial money, deemed “Michael’s money” after the original owner of the Old Stone House. Education Committee chair Terry Holt taught a lesson on colonial money and how it was earned.

As a special treat, the campers assembled their own blends of colonial spices to take home: salt, pepper, ginger, cinnamon and nutmeg. There are still a few openings for camps throughout the summer. Contact Tricia Denton Creel at the Rowan Museum at 704-633-5946 for more information.