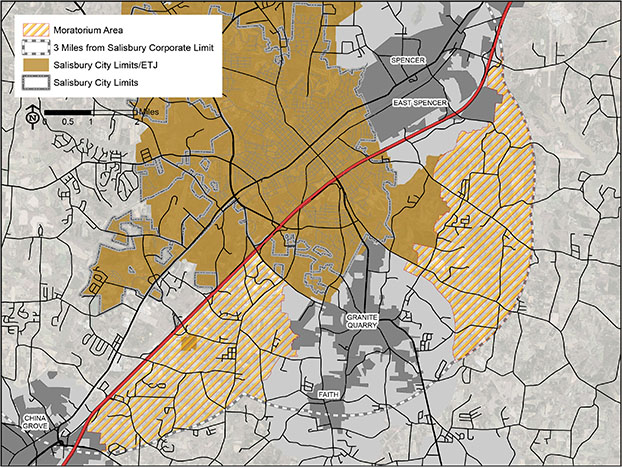 This map shows the "moratorium areas" where the City of Salisbury will temporarily refrain from annexing property using its annexation rule that requires property owners to request annexation into city limits in order to connect to the city's sewer and water system.

SALISBURY  — In an act of compromise, Salisbury is putting a pause on adding land in certain areas outside city limits by using a rule that has created friction with county leaders.

Until Jan. 1, 2023, the city will not add property in those places using an ordinance that requires property owners outside of the city’s limits to request voluntary annexation before being allowed to connect to Salisbury-Rowan Utilities’ water and sewer system. City council adopted that ordinance in September and has since been employing it to add land, especially parcels poised for economic development.

Annexation is how municipalities grow by bringing new properties into city limits. An annexed property is subject to city regulations and property taxes, but also receives city services, such as fire and police response.

The city’s self-imposed moratorium comes after Rep. Harry Warren, at the request of the Rowan County Board of Commissioners, introduced a local bill that would temporarily strip Salisbury’s ability to annex land outside of its extraterritorial jurisdiction, or ETJ. An ETJ is the area up to a mile outside the city’s corporate limits in which the city can exercise land use and zoning regulations.

County leaders made the request out of concern about the effect the city’s annexation approach was having on economic development.

“Specifically what we’ve asked is for them to grow within their ETJ,” County Commissioners Chair Greg Edds previously told the Post. “If it’s outside of their ETJ, it needs to be with a developer agreement that is voluntary and not mandatory.”

Warren said he hoped the bill would catalyze a compromise between the city and county. It appears to have done just that.

“This (moratorium) comes as a compromise position we’ve reached with the county,” Salisbury City Attorney Graham Corriher said during the council meeting on Tuesday night. “I appreciate the conversations we’ve had with them over the past month and look forward with working with the other municipalities to enter into these annexation agreements to benefit everybody.”

There are certain exceptions to the moratorium.

The city will still be able to annex parcels inside the “moratorium area” that become subject to an annexation agreement. Salisbury will maintain the ability to annex parcels for which it is participating in the cost of extending water or sewer service pursuant to a development agreement between the owner and the city.

The city will also move forward with annexing parcels whose owners petitioned for voluntary annexation prior to the moratorium being established.

“There are a number of different projects that were excepted from this because they’ve been in the pipeline and we didn’t want to slow any development down as a result of this,” Corriher said.

While the moratorium is in place, the city will work with Rowan County and neighboring municipalities to establish agreements to outline “growth boundaries” that will dictate future annexation.

“For Salisbury, because East Spencer and Spencer’s lines are already up to each other, it’s really going to be about China Grove, Granite Quarry and Faith for us,” said Mayor Karen Alexander, who added that she’s “very happy” with the resolution between the city and county.

Alexander said City of Salisbury planning staff, Rowan County planning staff and representatives from the municipalities will meet over the coming months to “hash out” the details. The growth boundary agreements would supersede any particular governing body, Alexander said.

“They wouldn’t be subject to being changed by any subsequent group,” she said. “That’s important because you’re talking about growth 5, 10, 20 years out, but you need to know that so you know how to make investments.”

Once the city enters into those agreements, Corriher said the “area where the agreements effect will be removed from the moratorium and the city can continue to enforcing its ordinance in those areas.”

With Salisbury’s self-imposed moratorium in place, the fate of Warren’s bill is unclear. The bill passed the N.C. House last week and was referred to the Committee on Rules and Operations of the Senate. Corriher said his understanding was that the bill would not continue through the legislature if an agreement between the city and county was reached.