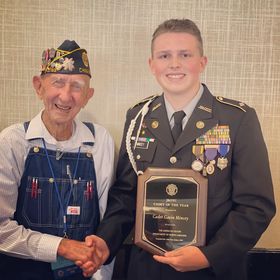 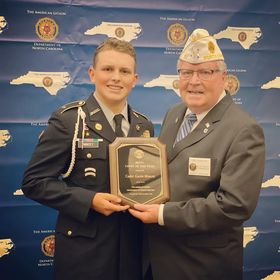 With applicants coming in from across North Carolina, it’s always a competitive process to even gain consideration for the state’s JROTC Cadet of the Year Award.

The honor, issued annually by the North Carolina American Legion JROTC Committee, is given to students involved in JROTC programs and enrolled at local high schools around the region.

This year, the award has made its way to Rowan County where local student Gavin Mincey, of South Rowan High, has stood out for his own contributions to JROTC and his community as well.

Mincey was presented with the Legion’s 2022 JRTOC Cadet of the Year Award on June 10 during a ceremony in Raleigh.

For the local cadet, the honor was all his.

“Going to Raleigh to meet and speak with so many of our veterans was such a privilege and something I will never forget,” he said.

Mincey was also quick to thank his JROTC instructors at South Rowan, remarking that they “helped me develop leadership skills, discipline and structure.”

With JRTOC Instructor Major William Lowe and longtime benefactor for South Rowan JROTC cadets Wild Bill Corriher among those in attendance, Mincey was surrounded by support from the JROTC community.

The rising senior expressed excitement over the opportunities that participating in JROTC will provide him for the future. He also aims to “inspire other cadets to reach their maximum potential.”

The honor is given out each year to cadets who excel in a number of different aspects of JROTC responsibilities and community involvement.

Mincey was selected due to his participation in JROTC programs, letters of recommendation sent in by members of the community, awards and decorations that he earned, physical fitness scores, duties held and community service.

Mincey was also required to complete a community service narrative essay describing the impact of his experiences on himself and those he worked with.