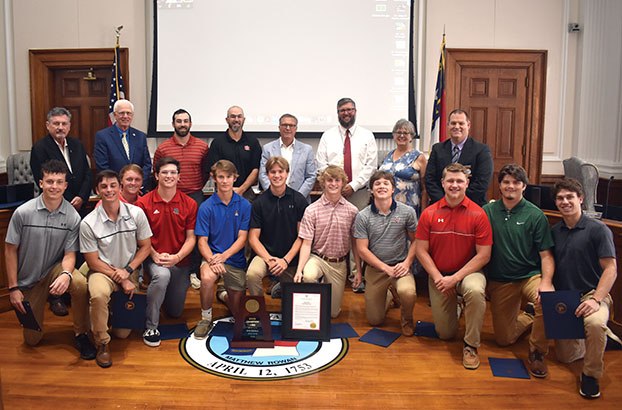 The South Rowan baseball team was recognized by the Rowan County Board of Commissioners for winning the 3A state title. Ben Stansell/Salisbury Post

SALISBURY — The South Rowan High School baseball team stopped by the Rowan County Board of Commissioners meeting on Monday night.

And they brought their new hardware with them.

Commissioners recognized the team and its coaching staff for capturing the 3A state championship. The Raiders won the title earlier this month with a 11-6 win over South Brunswick. The state title was the first for South Rowan in a team sport recognized by the NCHSAA. The Raiders are also only the second Rowan County team to win 30 times in a season.

The team won two consecutive contests in the title series after dropping the first game. Coach Thad Chrismon said the team, with a penchant for performing under pressure, “wouldn’t have it any other way.”

“They like to play close games,” Chrismon said “They relish that.”

Not only recognizing the team for its on-field success, Edds also congratulated the players for having a team grade point average of 3.9.

“That is a great statistic to have,” Edds said. “They’re great players and they’re great students.”