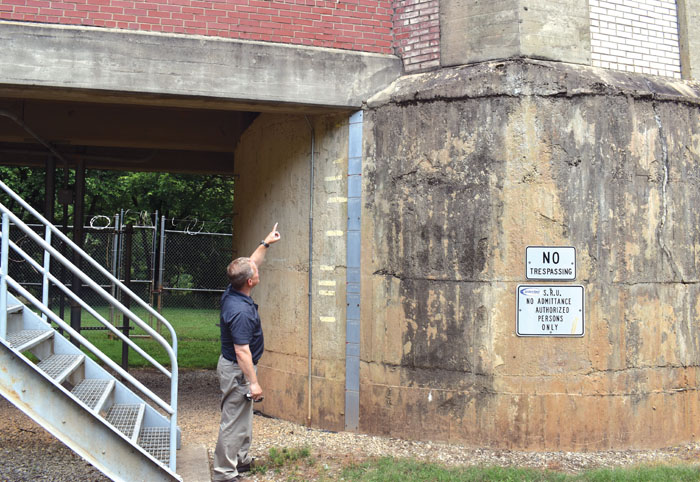 SRU Director Jim Behmer points to the place on the pump station wall where flood waters reached in 2020. The water was higher than the silver measuring stick the utility has used to record major flooding events in the past. Ben Stansell/Salisbury Post

Dates are etched at varying intervals on the strip going all the way to the top, about 10 feet above the ground, where March 21, 2003, is notched a few inches from where the strip meets the concrete and brick above.

Like a parent documenting their child’s growth by marking the kitchen door frame, the strip is Salisbury-Rowan Utilities’ way of recording just how high water levels at the pump station have risen during major flooding of the Yadkin River.

To show where the last major flood reached, SRU Director Jim Behmer points to a place above the metal strip.

“Two bricks up, that’s how high it was,” Behmer says.

The water from that Nov. 13, 2020, flood climbed the building’s stairs and pushed through the door, not stopping until there was two inches of standing water. The water lapped dangerously close to the electrical equipment powering the pump station, which forcefully directs untreated water from the Yadkin River to SRU’s 28-million-gallon raw water reservoirs a few miles away, near Ellis Park.

The pump station is SRU’s sole source of water on the Yadkin, serving about 52,000 customers in Salisbury and Rowan County.

Rising waters on that November day forced SRU to cut power to the pump station and activate its emergency interconnection with Statesville. The pump station, only accessible by watercraft at that time, was shut down for several days. It was the second time during 2020 that the pump station had to be powered down due to flooding. 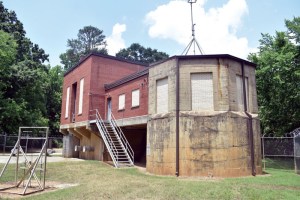 The Salisbury-Rowan Utilities pump station propels raw, untreated water from the Yadkin to large reservoirs before it is treated and dlivered to about 52,000 customers in Rowan County. Ben Stansell/Salisbury Post

The November 2020 flood is the latest and perhaps most blatant example of why Behmer would like to retire the pump station and build a new facility about half a mile downstream on higher ground. To make the roughly $30 million project feasible, SRU has applied for a grant from the Federal Emergency Management Agency’s Building Resilient Infrastructure and Communities program.

The water pump station is located near the confluence of the South Yadkin and Yadkin rivers, where the waterways meet just beyond a landmass known as “the point.” Two intakes located on the Yadkin receive the water that is eventually propelled to the reservoirs.

The station is a “Frankenstein” of old and new, said Behmer. The original, decommissioned portion was constructed in 1917. The newer part of the building that currently houses the operating pump equipment was added in the late 1960s.

The pump station was built with flooding in mind, but not the kind of floods that have happened with increasing frequency over the last several decades. According to multiple ​​peer-reviewed scientific and engineering studies, the cause for the number of high magnitude floods is High Rock Dam.

Built in 1927, the dam that created High Rock Lake has also caused steady deposits of sediment to build up along the Yadkin. The excess sediment has threatened SRU’s intakes on the river, and has resulted in more powerful, more persistent floods.

More than a decade before High Rock Dam was operational, the famous flood of 1916 sent water rushing down the Yadkin at historic speeds, causing widespread destruction in Rowan County. Since the dam was built, flood levels on the Yadkin near Salisbury have topped the 1916 levels numerous times.

High Rock Dam is operated by Eagle Creek Renewable Energy, a subsidiary of the company that acquired Cube Hydro. As a part of its hydropower license, Eagle Creek is being required by the Federal Energy Regulatory Committee to implement a sedimentation and flood protection plan that protects Salisbury’s water supply infrastructure.

For at least four years, the company and the city of Salisbury have disagreed over that plan.

Eagle Creek’s plan, which has been revised since initially submitted in 2018, proposes raising all the electrical and pump equipment in the station by nine feet and constructing a mezzanine that would allow employees to work on the equipment while the pump station is flooded.

Salisbury has opposed Eagle Creek’s plan since it was submitted and continues to challenge its feasibility in the court system.

“If, prior to Nov. 13, 2020, Cube Yadkin had implemented a complete and properly-engineered sedimentation and flood protection plan, the threat of destruction of essential equipment and pump station shut-down would have been prevented and the access road would have remained usable throughout the flooding event,” Behmer wrote in a memo to then City Manager Lane Bailey at the time.

Building a new pump station on higher ground is Behmer’s preferred course of action. But that is largely dependent on SRU being awarded the FEMA grant. Eagle Creek has committed to contributing $9 million toward the cost of relocating the pump station. Behmer said he’s appreciative of Eagle Creek’s commitment, especially because it should strengthen the grant’s chances of being approved.

The Rowan County Board of Commissioners earlier this month passed a resolution supporting the grant application, which will help SRU’s case as well.

Behmer expects to be notified of Salisbury’s grant status in the coming weeks. He’s got his fingers crossed. He would love a water pump station that doesn’t need a flood measuring stick.