High school girls track: As the throw flies … Ellis is making her mark 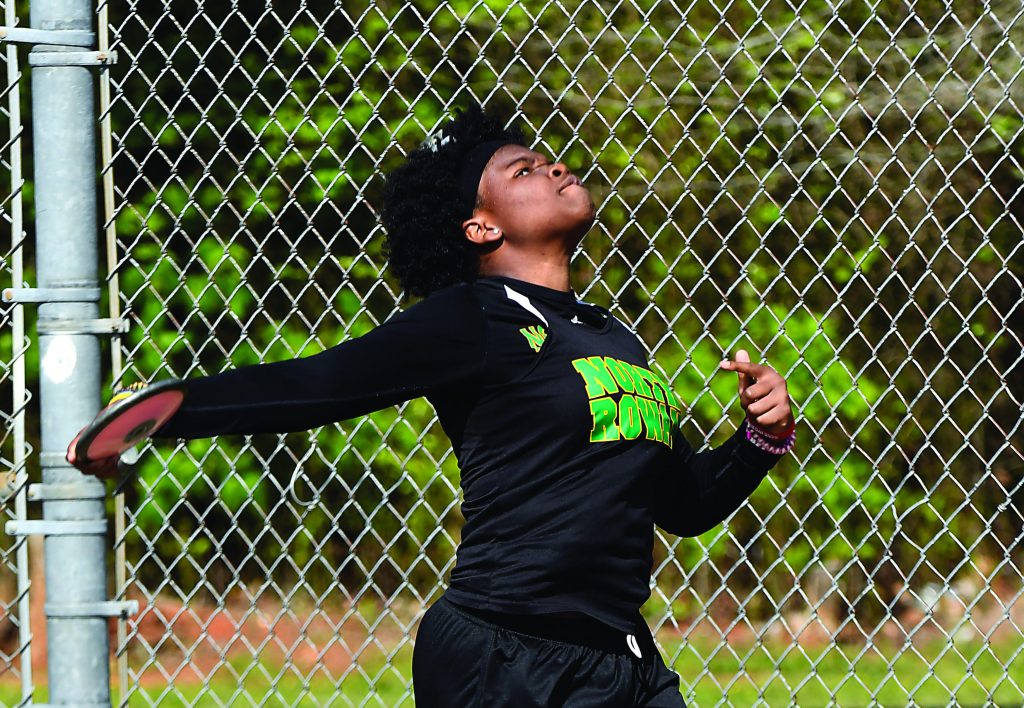 North Rowan’s Brittany Ellis won the shot and the discus in four straight competitions, including the 1A state meet. File photo by Wayne Hinshaw, for the Salisbury Post

Pick up a heavy object, spin around in a ring and fling it as far as you can, right?

Well, not exactly. There’s more to it than that.

Like most track and field events, the outstanding throwers live at the intersection of athleticism and technique. There’s science as well as muscle and sweat involved in championship heaves.

Not that you want to overthink it. Just do it.

Basically, to excel in the shot put and/or the discus, events that are about as much alike as a tiger and a zebra, you need to be really strong and really explosive. If you possess those two physical attributes, then you can master the scientific aspects with a strong work ethic and sufficient practice hours.

The Post’s Female Track and Field Athlete of the Year is a thrower. That’s unusual. It’s an honor that almost always goes to one of those girls speeding around the track.

The shot put and the discus are events conducted in a distant corner of the field. If you want to get a good look at the throws in the Rowan County Championships, you’ve got to make a hike. It’s a lot easier to find a seat near the finish line and watch those glamorous runners come pouring in.

Ellis is the first Rowan County girl from any school to win a state championship in the throws since Salisbury standout Alisha Bradshaw won three times— two discus championships (2010-11) and a shot put title (2011).

With twin titles as a sophomore, Ellis obviously has a chance to become the most decorated thrower ever for Rowan County girls.

Her discus distances aren’t quite out there yet with the girls who won state championships in larger classifications back in the day. Bradshaw topped 129 feet in 2010.

But the thing about Ellis is she’s young and she’s nowhere close to her discus ceiling.

“She improved every meet this season and was still improving when it ended,” Bush said. “She works so hard at it. She’ll improve some more.”

Her steady and impressive discus progressions for the outdoor season looked like this — county meet (93 feet, 3 inches); CCC Championships (97-9);1A Midwest Regional (106-6), and 1A State Championships (107-3, a Personal Record).

In the shot put, her progressions were — county meet (33 feet, 8 inches); CCC Championships (35-0), 1A Midwest Regional (36-7.25) and 1A State Championships (37-2, another PR). Bradshaw, Connor and Clinding were throwing the shot in the 39s as seniors. Ellis could achieve that plateau next season.

“Brittany’s grandfather (Ralph Ellis) is a great track coach, got her started early in AAU competition, and she was pretty good in throws even when she was 9 or 10,” Bush said. “There’s never going to be any noise out of her. Just a quiet, humble girls, very consistent. But she’s a tough competitor and isn’t going to back down from anyone from any school. We went down to a big Saturday meet at Marvin Ridge early in the season so our girls and boys could see what the 3A and 4A athletes were like. It was almost like a state championship meet for us. We competed hard and I think it gave us a lot of confidence as the season went on.”

Ellis is a sturdy girl, but she doesn’t have the height or weight of some of the large shot putters with whom she competes. She compensates with the explosion and flexibility that is part of her second sport — basketball. She had a solid sophomore season for the Cavaliers in the gym and averaged double figures. She can shoot and made as many as five 3-pointers in a game. She also gets after it. She had five steals twice.

While she gives her all to a North hoops, there’s no doubt that Ellis’  future is in track and field. She devotes her summer to AAU track meets.

“I’ve seen her play basketball, and she’s real good at it,” Bush said. “But track is where she can be very special.”

Ellis is an honor roll student, so there should be a scholarship waiting for the double state champ down the road.

“I know she likes UNC Charlotte, but she’s got some time,” Bush said. “That junior year is the big one as far as track recruiting. The main thing for several of our girls now is to keep those grades up and keep improving their times and marks.”

While Bush could count on Ellis for two wins and 20 points every meet, the Cavaliers had a lot more going for them. The team won the 1A Midwest Regional for the second straight season and finished a close second (80-77 to Swain County) in the 1A State Championships.

North sophomore phenom Tai’lah Ward won 1A state titles in both hurdling events and added a fifth place in the 100 meters.

“Tai’lah would have been 40 points for us in the county meet,” Bush said.

North sophomore Aniya Brown is another special and versatile athlete and can compete at the state level as a hurdler, jumper and sprinter. She didn’t win a state championship this year, but she racked up two individual seconds, a relay second place and a third in the triple jump. That’s 30 points in a state meet.

North doesn’t have a large track team, but there’s additional strength in the relays (4×100 and 4×200 regional champions), so they’ll be in the hunt for team state championships for the next two school years.

“Brittany Ellis and Tai’lah Ward picked out their championship rings the other day, and you’d be amazed at how much difference something like that can make,” Bush said. “Girls see those rings, and they get interested in coming out for the the track team. We’ll add some girls who can make a difference. We’ll have more options next year. State Championships are never going to be easy, but we’ll be in there competing for some. We’re starting to look at trying to win indoor track next winter. That’s our next goal.”

It was a strong year for Rowan girls in track.

Salisbury won the regional championship in the 4×400. Sutton Webb took second in the 2A State Championships in the 800.

South Rowan’s Macy Miller placed third in the high jump in the 3A State Championships.

The basic criteria for All-Rowan County is first or second in an individual event in the Rowan County Championships or first in a relay.

The Post also recognizes girls who win a conference championship, even if they aren’t in the top two in that event in the county meet. State qualifiers also are honored.