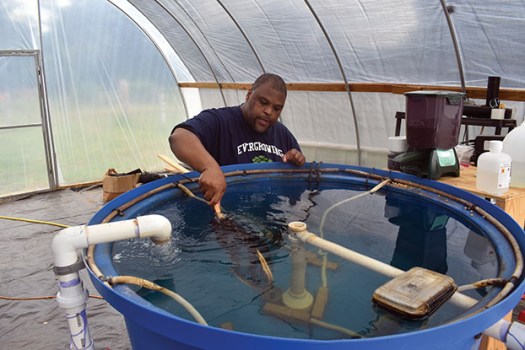 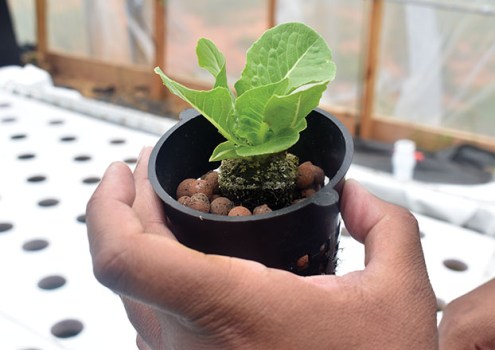 Allan Lanton is currently growing several heads of lettuce, but plans on using his aquaponic system to experiment with growing other crops like corn. Ben Stansell/Salisbury 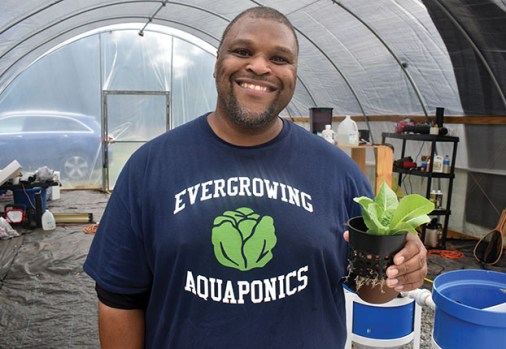 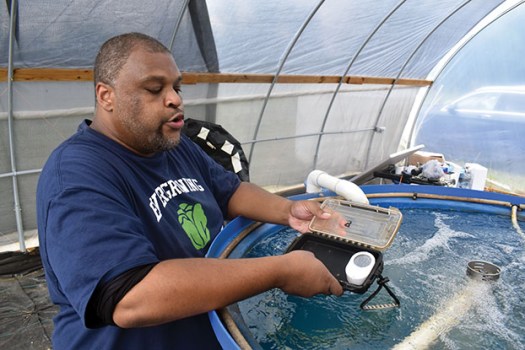 Since Lanton lives in Charlotte and is only able to visit his aquaponic greenhouse a couple times per week, he uses sensors that send data to his phone to keep track of indicators like water temperature. Ben Stansell/Salisbury Post

SALISBURY —  Most farmers rely on soil to grow their crops.

In a humid, high-tunnel greenhouse tucked between pastures north of Salisbury, the Ohio transplant is harnessing nutrients naturally produced by tilapia to grow leafy greens and other plants — all without soil.

The upstart company is called Evergrowing Aquaponics and Lanton plans on introducing his fish-grown produce to the Salisbury Farmers Market and other local grocery stores.

Aquaponics is a food production system that combines aquaculture (raising aquatic animals) with hydroponics (cultivating plants in water). In Lanton’s system, more than a dozen tilapia swim in an
oxygenated tank. Water from the tank, which contains ammonia-rich waste from the fish, is pumped through a biofilter. Bacteria in the filter convert the ammonia into nitrates. The water is then filtered into a plant tank where the roots of floating plants absorb the nitrates.

In essence, fish waste is turned into plant food. No fertilizer needed.

The clean water is then pumped back into the fish tank and the cycle starts again. It’s a closed system, which means less water is wasted.

The whole system is about 20 feet long, which is relatively small for commercial purposes. Still, Lanton said he has the capability of growing 150 heads of lettuce at one time. It only takes six weeks to grow a head of lettuce from seed. He’s experimenting with growing a few corn stalks, peppers and Moringa seeds, too.

Lanton will eventually harvest the tilapia as well. While some may consider farm-raised fish a stigma, Lanton said he likes knowing exactly the environment the tilapia have been raised in and what they’ve been fed.

An aquaponics expert now, Lanton remembers how foreign the food production system seemed to him at first.

“I was like, what kind of witchcraft is this?” Lanton said.

Lanton learned about aquaponics about a decade ago on a trip to visit Growing Power in Milwaukee. Founded by Will Allen, Growing Power was a nonprofit farm that became a model for urban agriculture before it was dissolved in 2017.

“I visited (Allen’s) farm in the dead of winter,” Lanton said. “It was like 30 degrees. I came into a greenhouse like this and I was just mesmerized by all of the green that was being grown. I was like, ‘Yeah, I want to build one of these.’ ”

But Lanton’s dream remained dormant for several years. In that time, he moved from Ohio to North Carolina to study at the Charlotte School of Law. He now works full-time in banking and lives in Charlotte.

Four years ago, Lanton was diagnosed with multiple sclerosis. Commonly called MS, it’s a chronic condition that impacts the brain and spinal cord, which make up the central nervous system. For Lanton, that means “ice pick” headaches, bouts of fatigue and occasional brain fog.

Stress can exacerbate MS, which is why Lanton decided last year to act on his goal of creating his own aquaponic system.

“My neurologist told me I needed to get into a less stressful environment,” Lanton said.

Maintaining the aquaponics system is calming for Lanton.

“My co-workers, all they care about is the next time they get fed,” Lanton said.

Several friends traveled to Rowan County from out of state to help him build the high tunnel greenhouse — a feat accomplished in just two days.

“It was an army of people,” Lanton said.

Lanton and his wife Celina built the aquaponics system inside. They also receive guidance from aquaponics guru Sam Fleming, director of the nonprofit 100 Gardens and an advocate for aquaponics STEM learning in schools and correctional facilities in the Charlotte area.

Lanton manages the system largely from his home near Charlotte and visits the greenhouse once or twice a week. A monitor that sends data to his phone helps him track the temperature of the water and an automatic fish feeder dispenses food to the tilapia three times a day.

While Evergrowing Aquaponics is in its infancy as a company — Lanton refers to the few dozen heads of romaine lettuce currently growing as his “proof of concept” — he has big plans for the business in the future. Lanton aims to eventually build a bigger system in East Spencer that can produce 1,000 heads of lettuce a week.