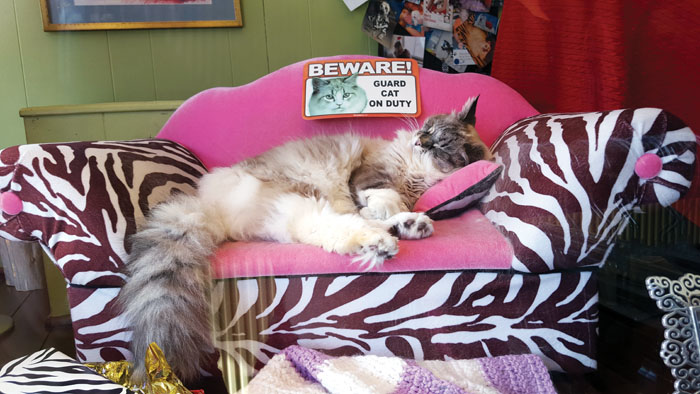 Since 1990, there’s been a shop kitty at the Stitchin’ Post.

That 32-year run ended Thursday morning, when Sasha Kitty Coffield quietly slipped away. She was 18 years old and adored by a legion of fans.

There was a sign, however, warning shoppers not to try to pick her up or feed her. She preferred to be worshiped from afar.

“She just wasn’t really that kind of a cat,” Coffield said.

What Sasha did do well was lounge around — on a chair or on a pile of shirts or on her sofa in the store window.

For the past year, Sasha was taking supplements for her thyroid and kidneys, and tolerated them well, Coffield said. But her bloodwork showed a decline in April, and more treatment would have not been effective.

“On Wednesday, she was pretty alert and even jumped into a box,” Coffield said. “But this morning she was a totally different Sasha. She was suffering.”

So she took Sasha to Lazy 5 Vets, where Dr. Rebekah Julian has been the kitty’s long-time vet. Last Thursday, Coffield had to have her basset hound, Gretta, 14, put to sleep.

Coffield and Sasha were able to spend a good bit of time together while they were waiting, but even then Coffield felt like Sasha was already on her way.

“She was the most perfect cat ever,” Coffield said. “She was perfect in every way for a shop atmosphere.”

Sasha’s connection with the Stitchin’ Post began back in 2005, when Coffield thought it might be a good idea for her elderly Knit Wit, then 16, to have a companion.

“One of our employees, Dottie Rebhan, was all about animals,” Coffield recalled. “She sent me this card on it with the most beautiful cat I had ever seen. It was a Himalayan. I told her, if you ever come across a cat like this, let me know.”

Sure enough, Rebhan saw an ad in the Salisbury Post for a cat that was part Himalayan, and all free. She gave the ad to Coffield.

“I carried that ad around in my car for a week,” Coffield said.

Finally, she knew the cat had to be gone by then, but she called the number.

“The number was for a lady in Cleveland, and she said I was the only person who called,” Coffield said. “She’d placed the two kittens Sasha had at the vet, but mommas aren’t as adoptable. I asked the lady to bring Sasha to the store, and she did, but she didn’t look anything like the Sasha the world knows. She was skinny and scrawny and her fur wasn’t long, but you could see the potential.

“Pretty soon, she started blossoming into this gorgeous thing she became. It was an amazing metamorphosis.”

Although Knit Wit — a handsome tuxedo cat in his own right — and Sasha were together for a year, they never really bonded.

With the rise of social media, Sasha became, well, a media darling.

“She got her own Facebook page, and at one time, she had more of a following than we did,” Coffield said. “She appeared in our commercials. People would come in the store saying, where’s that cat I see on TV?”

“I’m heartbroken,” said Karen Hurst, who served as Coffield’s ad rep at the Salisbury Post. “Sasha was always there to greet me. She knew my voice and she would come out. I was a big fan. It was always fun to photograph Sasha for the ads because you never knew what she was gonna do. She was a photogenic cat.”

Lisa Humphrey spent 15 years at the Post in creative services, and often electronically added a Santa hat or earrings to Sasha.

“I put Sasha is a lot of cute situations,” Humphrey said. “It was a fun, creative thing to do. If I ever went by the store, I always took a picture of her and gave her some love.”

Sasha had fans near and far. Billy Black is a barber in Harrisburg, but made a special point to visit Sasha after meeting Coffield at the Southern Christmas Show.

“My kitty was a Persian and they had that same look,” Black said. “Sasha had that regal look. She knew she was queen. I shopped at the Stitchin’ Post but Sasha was the main reason I went. It was always a mystery where she would be.”

For the last year or two, Black said, Sasha stayed in Coffield’s office, but he got to say hello when he visited.

“Sasha sensed my admiration for her,” he said. “I felt honored to be allowed to visit with her.”

Black acknowledged that going to the Stitchin’ Post won’t be the same, but he’s also developed a friendship with Coffield.

“She’s a classy lady and a Christian,” he said. “I like to support anybody who is that good of a person. It’s a honor to be associated with two such classy ladies.”

Karen Hardiman is an interior designer who helps downtown merchants with design projects. Like Hurst, Sasha knew her voice, too.

“She had rock star status,” Hardiman said. “She would hear my voice and come to greet me. I felt like I was a special friend. She was just one of a kind.”

Not only was Sasha a shop kitty, she also served as an advocate for no-kill animal shelters. For several years, Sasha’s Birthday Party to benefit Faithful Friends Animal Sanctuary was a huge success, Coffield said, as the non-profit organization was getting off the ground.

The store has also supported the Humane Society of Rowan County and Shelter Guardians.

“We will still be supporters of these groups,” Coffield said.

Hardiman also helps with the Animeals program, a summer fundraiser for the pets of Meals on Wheels clients.

“Sasha was our spokescat from the beginning and she has held that job very well,” Hardiman said.

“That’s a lot of food,” Hardiman pointed out.

This year’s Animeals will be held in memory of Sasha, she added.

Coffield said that Sasha’s fans are also welcome to donate money or supplies in her memory to Faithful Friends, the Humane Society or Shelter Guardians.