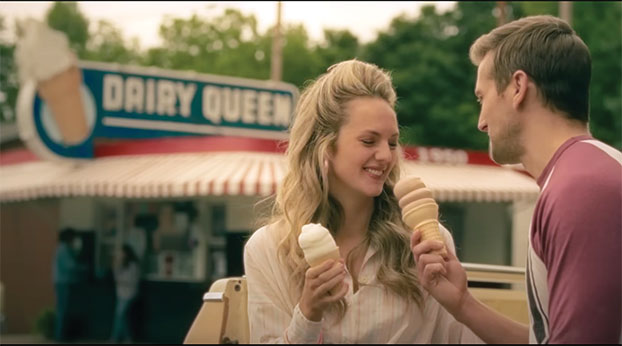 SALISBURY — For the past few weeks, Melissa Utley has been struggling to keep a secret.

Now that several hundred thousand people know what she does, she can exhale and enjoy the moment.

Just after midnight Friday morning, country music star and North Carolina native Luke Combs released the video to accompany his new song “The Kind of Love We Make.” The single is from Combs’ upcoming album “Growin’ Up,” set for release later this month.

Featured in the background of a few frames is a landmark unmistakable to anyone who has called Salisbury home — the blue, ice-cream cone sign and red-striped awning of the Dairy Queen at 1004 W. Innes St.

The shop, which has been delighting customers of all ages with “ice milk” for more than seven decades, is where the couple at the center of the song’s story seemingly fall in love, each with an ice cream cone in hand. The couple was played by actors and Utley doesn’t think Combs himself visited the Dairy Queen for the filming.

The Dairy Queen served its first frozen treats in 1950 and was originally operated by entrepreneurs Gerald Grumbly and Robert Widerman of West Palm Beach, Florida. Robert Utley, Melissa’s husband, purchased the store with his partner, Bill Link, in 1981. Melissa took over management responsibilities a decade later and it’s been in her care ever since.

The store was once a seasonal operation, but Melissa and her brother Derek Porter, who helps out with the day-to-day operations, keep it open year round.

Boasting a nostalgic facade that brings back memories from time before, it has been photographed countless times over the years. But Melissa said it hasn’t been incorporated into a major music video until now.

A Charlotte-based production company reached out to Utley about using the site as a filming location about three months ago. They wouldn’t tell her much more than that — only that the store, with walkup windows that draw long lines in the summer, would be an ideal setting.

“They said they knew they wanted an early ’80s type of setting with a standalone ice cream shop that looked kind of unique,” Utley said. “They came upon us and thought it’d be a perfect fit.”

Most of the video was shot in a small town outside Nashville, not far from Combs’ current home, according to an article from the Tennessean.

The scene at the Dairy Queen looks like it was shot around dusk, but it was actually filmed closer to sunrise. Utley and Porter actually arrived at the store around 6 a.m. for the shoot. The early shoot ensured that the video wouldn’t disrupt the store’s regular hours or draw too much attention.

Still, a few people noticed the filming equipment and had questions. Utley didn’t give anything away.

Utley and Porter’s jobs during the shoot were to “stay out of the way and make ice cream cones,” Utley said. 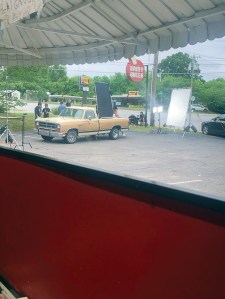 Melissa Utley’s view during the filming of a Luke Combs music video at her Dairy Queen. Photo submitted.

Utley didn’t see the music video until Friday morning when she woke to find her phone flooded with texts from her daughter who stayed awake until midnight to watch it as soon as it was released. Messages and calls from other friends and family started to pour in as the morning went on.

The song and music video tells the story of a young couple connected by a house fire. The storyline hits close to home for Utley, who said her parents “had a love story like in the video.” Utley’s father, Darryl, and mother, Rachel, were married for 61 years before Darryl passed away shortly after the video was filmed.

“I know he would’ve been so excited to see it,” she said.

As of Friday afternoon, the video had already surpassed 220,000 views on YouTube.

Utley is “so thrilled and so honored to be a part of it.”