Sports obituary: Platt was one of a kind 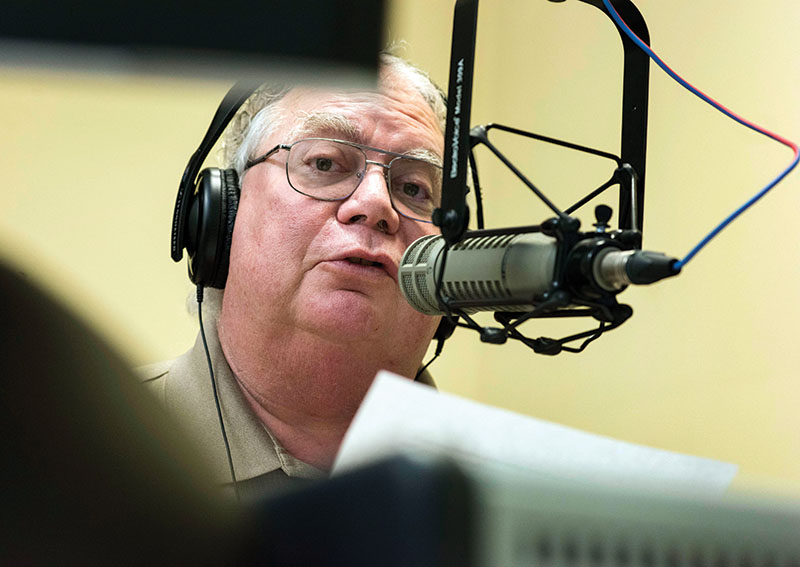 “I’d listen to an inning or two,” Gurley said. “You could always listen to Howard no matter what the score was or who Rowan County was playing. He was just so good at calling a game.”

Platt’s voice was his great gift. He shared it with Rowan County sports fans for more than 40 years.

Platt liked to joke that he had a face made for radio, but that voice was something else. It was smooth. It was enthusiastic. It was authoritative, yet reassuring. It was a voice that made you feel comfortable whether you were in the car, in the living room or sitting in the bleachers watching the game he was describing.

Even if Platt had told you the count on the batter was 4-and-3, you would have believed him, because Platt always sounded like a guy who knew exactly what he was talking about.

He knew basketball, baseball and football backwards and forwards. Not just the stats, but the intricacies of the games. He knew what made coaches tick. He knew what players would come through in the clutch.

“He was outstanding at what he did,” Gurley said. “He could speak so effortlessly and confidently on the radio because he did his homework. He was well-prepared.”

The golden voice is silent now. Platt died at his residence on Thursday, June 9. He was 71.

“I don’t know if the new generation of young people can ever understand what Howard meant to Rowan County sports,” Gurley said. “But there was a time that if Howard Platt walked into your locker room or into your gym everybody knew it was a big game. He was a pro. He was there to do his job, and he was the most unbiased person I ever met.”

While he broadcast hundreds of basketball and football games during a storied career, Platt was best known for his work on Rowan County American Legion baseball. Generations of Rowan County fans sat by their radios to listen to Platt’s accounts of what was happening in Florida and Alabama, in Oregon and North Dakota.

He was pretty darn great at it. If you were listening, you could tell how much he was rooting for Rowan County to win, but he walked that fine line of supporting the home team without  being a total homer. Platt accentuated the positives and downplayed the negatives because the players were just teenagers, but Rowan County was always Rowan County. Rowan County never became “we” and “us” — even if Rowan was playing Las Vegas.

Platt grew up in Strasburg, Va., becoming an avid fan of the Washington Redskins — his family owned season tickets — as well as the Washington Senators, the baseball team Platt loudly disowned after they moved to Texas and became the Rangers following the 1971 MLB season.

Platt grew up listening to play-by-play pros such as the Redskins’ Frank Herzog and the Baltimore Orioles’ Chuck Thompson. That’s where the seeds of a broadcasting career were planted.

Platt attended Massanutten Military Academy in Woodstock, Va. It’s hard to imagine him surviving in a world of short hair, inspections, salutes and shined shoes, but he graduated as valedictorian in 1969.

He visited the University of North Carolina campus for the first time as a high school junior and knew immediately that’s where he’d go to college. He loved Chapel Hill.

He majored in psychology. He lived on the same floor as basketball players such as George Karl, Bob McAdoo and Bobby Jones and became friends with them. He developed an affection for Tar Heel basketball — and football — that knew no boundaries.

He graduated from college in 1973. He applied for graduate school in psychology at James Madison University, but, by then, he knew that sports broadcasting is what he really wanted to do for a living.

He went to work for a radio station in Culpepper, Va., spinning records as a disc jockey and serving as a color analyst for high school football and basketball games. He started at the bottom. His first play-by-play over the air waves was a jayvee basketball game.

He practiced at home, announcing the various rolls of the dice as he played the APBA baseball board game. “And Aaron doubles off the wall! Garr scores!”

One fateful day, Platt spotted an ad in a trade publication. Bob Rathbun was leaving WSTP/WRDX. A new sports announcer was needed to fill the void in Salisbury.

Platt’s first play-by-play effort locally was a 1978 Salisbury football game that he worked with Doug Rice, who has gone on to an impressive Hall of Fame career as a racing broadcaster.

They weren’t very smooth that night, but the story goes that Platt listened to that disappointing tape over and over. The next time out, he was a lot better, and eventually he found his stride.

“Howard Platt has been Rowan County sports on radio,” Rice said in a Post interview with Mark Wineka a few years ago. “It didn’t matter if it was American Legion baseball, Salisbury High football or following county teams to the championship, Howard Platt was there. He was the voice on the radio that transported generations of Rowan County sports fans to the games.”

Platt’s debut as a Legion baseball broadcaster came in the summer of 1979.  He and David Whisenant, now a WBTV bureau reporter, formed a flawless Legion broadcast team for 20 years.

Platt’s passion for Legion baseball was second to none.

He called some Davidson basketball — Matt Doherty served as his color man — and even did some UNC Charlotte 49ers hoops.

“I loved Howard because he saw things in me no one else did,” Cherry said. “He gave me friendship and he gave me opportunities that I never would have gotten from anyone else.”

No one kept stats on how many times Platt made the necessary line connections, settled in behind his card table, adjusted his head phones and pounded out another broadcast.

Away from the diamond, Platt and Kent Bernhardt became Rowan County’s favorite “odd couple” on WSTP 1490, with their lively morning-show bickering on the topics of the day. Platt’s politics were liberal and he was so opinionated it was hilarious. Neither held anything back, but it was never personal. They were buddies. Platt annually ate Thanksgiving dinner at the Bernhardts.

“We heated up those microphones, back in the day, during a time when you could have debates about life and politics and still be friends,” Bernhardt said on social media after Platt’s death. “Howard was one of a kind. We’d have a spirited discussion on the air  — right up to the point of anger — and then during the commercial break we’d laugh, talk about how good that segment was, and make plans to grab a bite of breakfast after the show.”

Platt was a Salisbury-Rowan Hall of Famer. In 2003, he was the North Carolina Sportscaster of the Year, and it’s just about impossible for a small-market guy to win that.

In 2017, when he announced his retirement, Platt received the National Sports Media Association’s Lifetime Achievement Award.

Platt was a character. He crafted NCAA tournament pools and NFL predictions pools that were borderline big business. He loathed the Duke Blue Devils and he despised the Dallas Cowboys. He could swallow two hot dogs — all the way — in 30 seconds at Newman Park. His stop-and-go driving habits became legendary.

But there was that voice. That voice was a gift that just kept on giving.

There was no formal funeral service for Platt. Friends and family gathered at DJ’s on Wednesday to share stories about his life.