Softball: In Rowan, Lady Legion ‘is here to stay’ 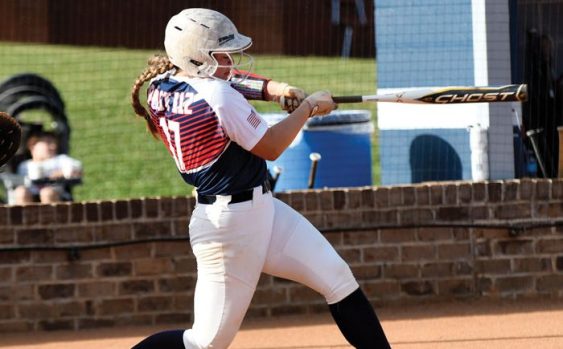 Rowan's Maddie Roberts swings away. photo by Wayne Hinshaw, for the Salisbury Post 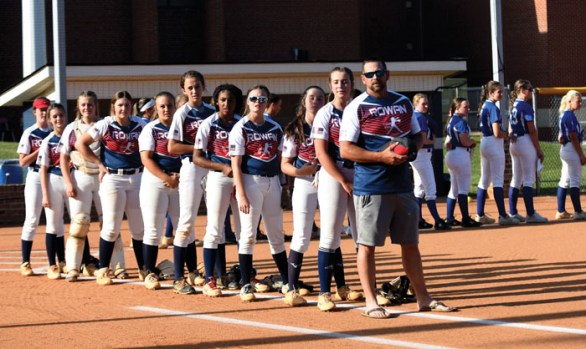 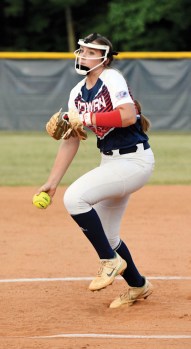 Rowan's pitcher Eleni Miller 10 in the second game., photo by Wayne Hinshaw, for the Salisbury Post 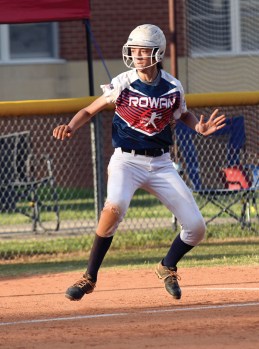 Rowan's Kady Collins 3 on 3rd base., photo by Wayne Hinshaw, for the Salisbury Post 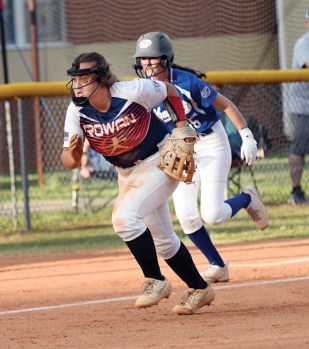 Rowan's third baseman Kori Miller 9 charging a bunt with Kannapolis', Allyson Campbell 15 on 3rd base ., photo by Wayne Hinshaw, for the Salisbury Post 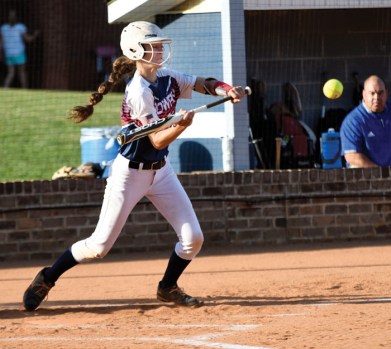 Rowan's Lady Collins bunts for a base hit with bases loaded to score a run. photo by Wayne Hinshaw, for the Salisbury Post

GRANITE QUARRY — Pitcher Lonna Addison allowed 13 hits in a game on Tuesday night, but Rowan County got the win.

Like Addison, Lady Legion softball is hanging in there.

Lady Legion was in the experimental phase in 2017, with North Carolina in the vanguard for the nation, and Rowan County helping lead the way for North Carolina. There were 20 Senior teams and seven Junior teams that first summer.

The trial period was declared a success. In the fall of 2017, North Carolina American Legion announced the sport would be fully sanctioned for 2018.

While Lady Legion hasn’t snowballed as some hoped it would, it is still operating in Rowan County. Organizer and head coach Todd McNeely is still putting together teams.

There have been changes. The home field shifted to East Rowan a while back. The roster has condensed. In 2022, Rowan’s girls of summer come only from Carson and East Rowan.

While there have been detours and setbacks, McNeely, who is the head coach at East Rowan, sees a bright future.

“Lady Legion is here to stay,” he said.

Most of those programs are out of the game now, at least temporarily. The four Senior teams in Area III this summer are Rowan County, Kannapolis, Davidson County and Mint Hill.

“COVID really hurt us,” McNeely said. “That 2020 season there were close to 100 Junior and Senior teams planning to play in North Carolina, but then we didn’t have a Lady Legion season at all that summer and we lost a lot of softball players for two years. Now some areas with strong high school softball don’t have Lady Legion.”

Area I, which includes Raleigh, Wilson and Goldsboro, has a total of five Senior teams and two Junior teams.

Area II, the coast, has three Senior teams and no Juniors.

McNeely said the biggest struggle for Piedmont Lady Legion teams is that it’s such a strong region for travel ball organizations.

That’s why Lady Legion teams play five-inning doubleheaders on Tuesdays or Thursdays, avoiding weekends when the travel teams are playing tournaments.  But there are still times when Lady Legion players have travel ball practices that conflict with Legion games.

“If you’re paying a lot of money to be on a travel team, you’re not going to miss a practice,” McNeely said. “I understand that. We do our best to work around it.”

While Rowan has a thin roster this year, it’s a talented one. Shortstop and lead-off batter Mac Misenheimer, a Chowan signee from East Rowan, was the South Piedmont Conference Player of the Year.

Carson graduate Abbey Nixon is  a Lenoir-Rhyne recruit who was co-player of the year in Rowan County in 2021. She came back strong from a torn ACL as a senior and provides a big bat in the middle of the lineup.

Carson rising senior Addison is the county’s most experienced pitcher and can also pound the ball out of the park.

“I like to tell her she’s the old lady of the county,” McNeely said. “There were freshmen pitchers all over the place this year.”

Forming the core of the Rowan Senior team are six Carson veterans and Misenheimer.

McNeely has East girls who are eligible for the Rowan Junior team, age-wise, playing “up.” There are quite a few rising sophomores from East on the Senior team, and even one rising freshman — 14-year-old Kimberly Troublefield.

“One pitch cost us a game and we just had a slow start in the other one,” McNeely said. “Davidson has a really good team, but we can hang with them.”

Rowan split a home doubleheader with Kannapolis, winning 2-1 and losing 5-3.

Rowan trailed 7-4 going to the fifth inning in the first game, but loaded the bases on hits by Troublefield and Stewart and a walk to Misenheimer. Nixon’s double tied the game. Burns’ bunt scored Nixon with the go-ahead run, and Rowan went on to to take an 11-7 victory. Plott went 3-for-3. Addison  hung in there despite allowing 13 hits and got relief help from Barber.

Rowan (3-3) put up seven runs in the fourth and fifth to pull out the nightcap 8-3. Misenheimer led off the game with a home run. Stewart belted a two-run triple, although she was thrown out at the plate trying for an inside-the-park homer. Together, Barber and Addison got the job done in the circle.

“By the time I got home and parked the bus, it was 11:10,” McNeely said with a laugh. “That’s a long day, but when you win two, it’s worth it. It’s the first time we’ve had all the older girls this year. We hit the ball well.”

It will be a brief regular season for Rowan County, with only three league opponents and six doubleheaders. Road rematches with Davidson County (June 21) and Kannapolis (June 23) are coming up next week. Rowan will play Davidson County at Central Davidson High and will take on Kannapolis at Kannapolis Middle School.

“It looks like a light schedule, but it works out well for us because we’re not that deep in pitching,” McNeely said. “All our girls like to play, but it’s not like they want to be playing every night.”

The Senior playoffs will begin on July 18. The state tournament is scheduled for Marion on Aug. 1-3.

Rowan County has big things planned for the July 14 home games with Mint Hill, the regular-season finale. That’s the night the team will honor veterans. Veterans will get in free, they’ll get a free meal, and they’ll get to walk out on to the field escorted by players.

“It’s a chance for our girls to serve them, for a change, and it’s the least we can do,” McNeely said. “We’ve had 50 to 75 veterans come out to the game in previous years. We’re hoping for 100 this time.”

NOTES: Rowan County’s strong Junior team won the Lady Legion state title in 2021. McNeely said that team has about two-thirds of its roster back. … The Rowan Junior team opened this week by pummeling Concord 9-0 and 17-0. … The South Rowan Junior team had a strong debut with a sweep of Mint Hill. … The state tournament for Juniors will be held in Marion on July 29-31.