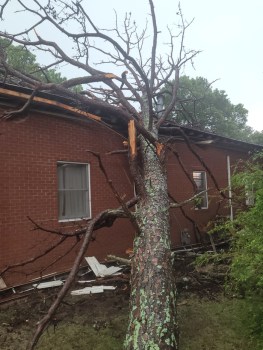 Damage to Kannapolis Fire Station 4 is seen inside. Submitted photo

KANNAPOLIS — Kannapolis Fire Station No. 4 on Stewart Avenue was damaged during Thursday afternoon’s storm when a tree fell on the roof. No one was injured and no fire trucks were damaged.

A renovation of the station was in the beginning stages and will continue after the storm damage has been assessed.

No emergency service was interrupted and Fire Station No. 4 crews continued to respond to calls.

City police and fire departments responded to a number of calls during the thunderstorm, but there were no injuries and no major damage. Several  ongoing power outages have been reported in Kannapolis.