Historic church on Gheen Road burns to the ground 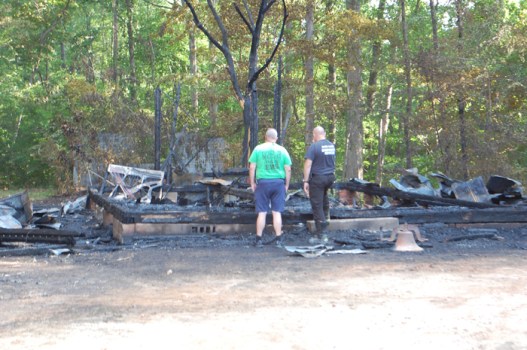 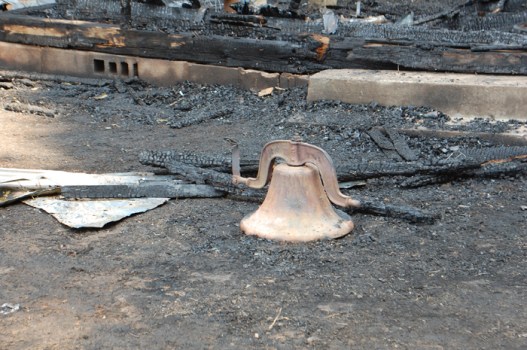 A Church bell was the one relic that appears to have been saved when Second Creek church burned to the ground overnight Wednesday night. Elisabeth Strillacci/Salisbury Post

SALISBURY — The Second Creek Church, which began life as an AME Zion and ended as a Methodist church, was on the same Gheen Road ground since about 1867 — until Wednesday night, when it burned down.

Rowan County Fire Marshal Deborah Horne said the first call about the fire “came in at 11:26 p.m. Wednesday night from a neighbor out walking the dog who spotted the flames.”

Two more calls came in quick succession, one from someone driving home and one from another nearby neighbor.

According to reports, by the time firefighters arrived on scene, the building was fully involved. But firefighters were able to stop the fire from spreading to the former school building/house on the same property.

Horne said investigators will process the scene to determine the origin and the cause of the fire, but declined to say if there was any cause for suspicion. North Carolina State Bureau of Investigation, Rowan County Sheriff’s Office and the department of Alcohol, Tobacco and Firearms have joined the investigation.

Francis Young, whose father Paul Blackwell bought the school building after the school closed and turned it into a residence for his large family, grew up attending the church and, until third grade, the school.

Her grandfather, William Blackwell, donated the land that the two buildings were on, she said.

“The church was originally on what is now Holt Road,” she said. “The street didn’t have a name at that time. We called it ‘The Bottoms’ because it was way down there. But my family took the church and moved it, plank by plank, on a wagon, to the place it is now.”

Young, born in 1941, said the church was “owned or managed or however you want to say it” by the Blackwell and Carson families. Her mother, Mary, and her father are both buried in the cemetery at the current location. Other family members are buried in the original cemetery on Holt Road.

“I just can’t believe this is true,” said Young. “That church has been a part of my life all of my life.”

Originally an AME Zion church, Young said the church ended that affiliation in the 1950s, and became instead a Methodist church. Then “in about 1980, I think, the church closed because the older members had died and the younger family members moved away, so there was no congregation. So the church has been closed for 50 years.”

But her family lived in what had been the school house until about 2000, when her mother passed away and other family moved out. Young herself attended the church until she was about 30, when she herself married an AME Zion pastor and moved away.

The family still retains ownership of the property and buildings, though, and she said she sent her son money recently to get the grass cut. In 2012, the Historic Salisbury Foundation paid for repairs, including a new roof, to the church, and she said she knew they started the process of having the church designated a historic building, but she never heard it had happened.