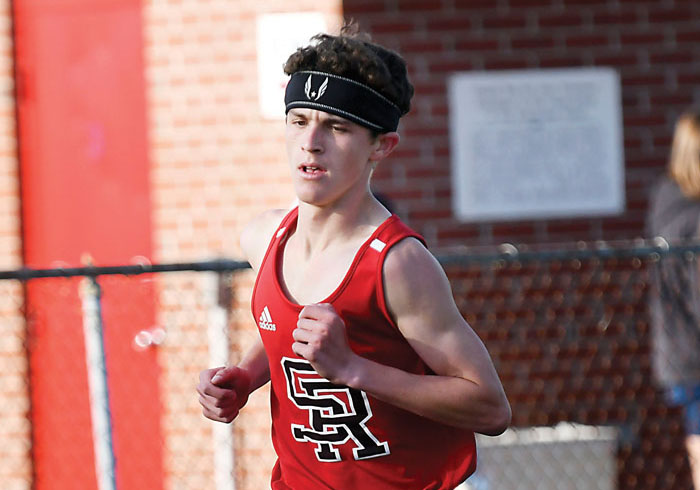 South Rowan’s Eli Julian competes in the 1600 during the county track meet. photo by Wayne Hinshaw, for the Salisbury Post

LANDIS —  The true runner gives everything to his sport.

South Rowan rising junior Eli Julian is still very young, but he’s given all those things for many years. He’s got ideal genetics to run, but he’s also someone who has made the sacrifices to make the quantum leap from very good to great.

His road to this point has been arduous, but there’s a lot more coming beyond that next turn. He’s only halfway through high school. There are likely to be broken county records and maybe even state titles when he’s done at South.

Julian is the Post’s Track and Field Athlete of the Year.

There were multiple outstanding candidates, but Julian was the central figure in the biggest event of the year — the Rowan County Track and Field Championships. At the East Rowan track, he willed South to a shared team title with the Mustangs. East had an outstanding thrower in Dominick Dale, a state-level pole vaulter in Luke Heglar and a deep cast of supporting characters who piled up points … but South had Julian.

“I’m not going to say it was easy — it was a very hard day at the county,” Julian said. “Toughest part definitely was getting the 4×800. We needed every point.”

“He’s a machine, a running machine,” added South coach Tyler Downs. “But as great a runner as he is, he’s always team-first. He’s a leader. He’s a great teammate. He’s someone we can count on to help everyone on our team.”

While Julian appears to have lungs made of steel and legs forged from leather, he is human.

He made a critical transition this season. As a freshman, he had his older brother, Noah, setting the pace, showing the way. All he had to do was stay on Noah’s heels, and he was going to finish second in most races.

This time he usually was a solo performer, running alone, just him and the clock.

“It was definitely tougher without Noah,” Julian said. “But my training got even tougher. I adjusted.”

Julian puts in volume mileage during the summer as he prepares for cross country. Those 45-mile weeks have constructed impressive endurance.

No one ever doubted his stamina, but there were questions about his pure speed when he was younger. He’s answered them, as he’s gotten taller and stronger and his stride has lengthened. His speed is coming. His finishing kicks are getting more powerful.

“That comes from the speed work we do during track season.” Julian said. “That’s when we’re doing lots of sets of 200s and 400s.”

Julian said he can run 400 meters in the 54 to 55 second range. That’s not exactly flying, but it’s solid. It means that if he ran the 400 in the Rowan County Championships, he’d be in the hunt for second or third behind Salisbury’s Jamal Rule. Julian would be running right next to Salisbury’s Mike Geter, and if you’ve ever been to a Salisbury football game, you know that Geter is a very swift man.

At the 3A State Championships at North Carolin A&T, Julian had planned to put everything he had into his best event. That’s the 1600, an event in which he set school records this season.

But he got boxed in during the first two laps, ran 4:28, and finished seventh, which was a disappointment to him.

“Things didn’t go as well as I wanted,” Julian said.

He had not prepared mentally to run the 3200, but he made a decision to compete about two hours before that event. In 90-degree heat, he ran the second-fastest 3200 of his life (9:51) and placed sixth.

He came up a bit short as far as medals and All-State honors, but he laid the foundation for a future that is as bright as the sun.

This fall, he’ll be chasing all-time cross country records for Rowan County. Only the clouds will be the limit for his track and field season next spring.

“He’s one of the really special ones,” Downs said. “There are good things out there for him.”

The basic criteria for All-Rowan County track and field is first or second in an individual event in the Rowan County Championships or running on a relay winner.

Salisbury won the team title in the CCC Championships. Marcus Cook placed second in the triple jump in the 2A State Championships.

North Rowan was short on numbers, but had enough standouts, led by hurdler Quintin Wilson, sprinter Amari McArthur and thrower Pharrell Hailey, to place second in the 1A Midwest Regional and fifth in the 1A State Championships.