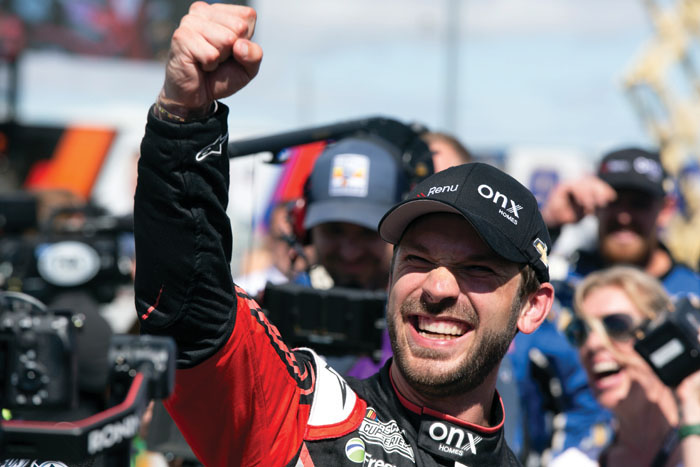 CHARLOTTE — Here are some things to know about Daniel Suárez’s long journey before becoming the first Mexico-born winner at the top level of NASCAR:

• When he decided as a child in Monterrey to seriously pursue a career as a racecar driver, Suárez’s father closed his well-known automobile restoration shop to support his son.

• Suárez’s first move to the United States to pursue his dream wasn’t a relocation to NASCAR’s hub in Charlotte, North Carolina, but rather an unconventional arrangement to live with his team owner in Buffalo, New York.

• He spoke no English and had to learn by watching cartoons, programming with light dialogue that could teach him the basics.

• When he finally made it to North Carolina, he crashed with various friends until at last landing the cheapest apartment he could find in Mooresville, unofficially known as “Race City USA” because of its proximity to NASCAR shops.

It was the hardest two years of his life.

“I didn’t have money to buy myself classes to speak English,” recalled Suárez. “I remember one day waking up and being scared that the language barrier was going to keep me away from my goal, which was being a winner, a championship winner in the NASCAR Cup Series. I didn’t want that to happen. I started working extremely hard to learn English.

Suárez is only the fifth Cup winner born outside the U.S. in NASCAR history. He won on the road course at Sonoma Raceway, in his 195th career start, to join Marcos Ambrose (Australia), Juan Pablo Montoya (Colombia), Earl Ross (Canada) and none other than Mario Andretti (Italy) as internationally-born Cup winners.

But Suárez had won long before Sunday, first in the NASCAR Peak Mexico Series, then in K&N, then a Truck Series race driving for Kyle Busch. He was beloved by Toyota, which very much wanted him in its program, and he advanced into an Xfinity Series ride with Joe Gibbs Racing that should have changed his life.

Suárez won three races and the 2016 Xfinity title, and maybe in another year he’d be ready for Cup. Instead, Carl Edwards abruptly retired and with an unexpected hole to fill in its Cup lineup, JGR hastily promoted Suárez.

He wasn’t ready to drive the No. 19 Toyota, and JGR gave him two seasons before cutting him loose to promote Erik Jones. JGR has since cut Jones, too.

Stewart-Haas Racing took a shot on Suárez in 2019 and he thought he’d cobbled together the sponsorship to keep the seat longer than one season. The weekend of the finale, he learned he’d been fired for the second time in a year.

Gaunt Brothers Racing took Suárez for the 2020 season but it was a fledgling team and failed to qualify for the season-opening Daytona 500. The remaining 35 races were awful and Gaunt Brothers has run just eight races since Justin Marks threw Suárez a lifeline at the end of that season.

Marks was launching Trackhouse Racing and wanted to build it around Suárez, who was joining his fourth team in four years. Marks is a former driver but also a businessman; he believed Suárez could be a winner in the right environment, and also recognized what a Mexican driver could do for Trackhouse.

As he built Trackhouse around Suárez, Marks brought entertainer Pitbull into his ownership group. The duo had clear goals of tapping the Latino market and making an impact on youth in America’s minority communities.

The biggest move was last summer when Marks bought the entire NASCAR organization from Chip Ganassi, which gave him the people, the parts and the shop he needed to field a winning team. It also gave him room for a second car and the seat went to Ross Chastain, who not only won Trackhouse’s first Cup race this March but added a second victory, as well.

Suárez was supposed to win Trackhouse’s first race, not Chastain. Now Chastain was locked into the playoffs while Suárez was below the playoff cutline with not much to show for his improvement.

Immediately after Suárez took the checkered flag Sunday, Marks noted that Suárez and crew chief Travis Mack built Trackhouse and Chastain victories were “tough on them. But they never gave up, they knew they were going to be in victory lane.”

Suárez’s entire career has been about not giving up and his decade-long climb has been remarkable. Fox Sports last season put Suárez in the booth for an Xfinity Series broadcast and he even called a lap in Spanish.

His journey is far from over and he has been celebrated across motorsports since his win: Mexican drivers Checo Perez of Formula One and Pato O’Ward of IndyCar sent social media congratulations, while F1 reigning champion Max Verstappen left his regards on an Instagram post of Suárez’s girlfriend, Julia Piquet. Suárez and Verstappen are both in long-term relationships with the daughters of three-time F1 champion Nelson Piquet.

As he glanced across Sonoma Raceway, Suárez noticed his section of fans. They are called Daniel’s Amigos, and they had a fan club event before the race. Now their driver was a winner and Suárez apologized for the exuberant expletive he shouted toward their section.

Then Suárez addressed his fans in Spanish before quickly translating his message into English:

“This is the first one of many,” he smiled.