‘About time that we demand better’: Community members rally for gun control measures 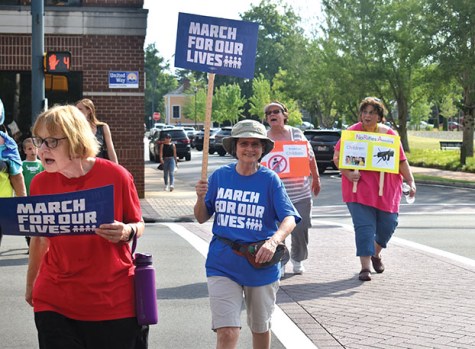 Protestors crossing Innes Street at the end of March For Our Lives. After the walking was over, protestors gathered around to hear speakers demand political action on gun violence. Ben Stansell/Salisbury Post 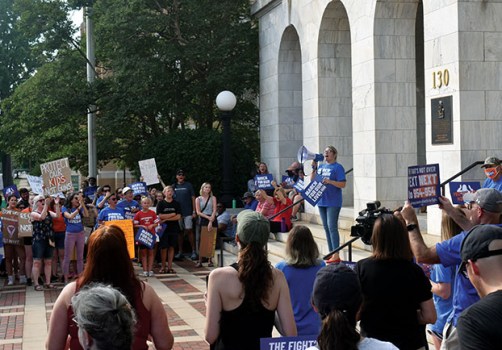 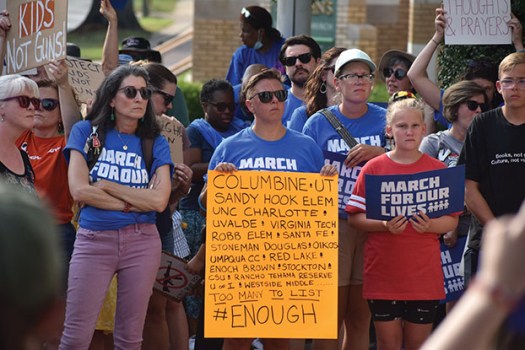 Protestors referenced the long list of mass shootings that have taken place in America in both their words and on their signs. Ben Stansell/Salisbury Post 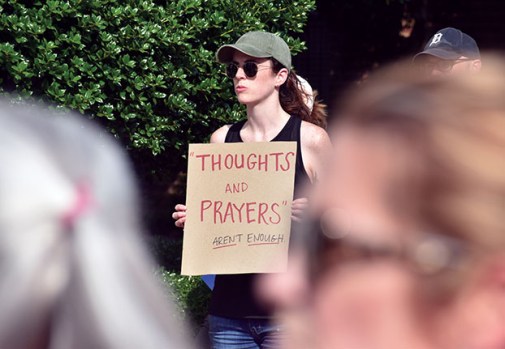 Shirts and signs were provided, but many protestors made and brought their own. Ben Stansell/Salisbury Post 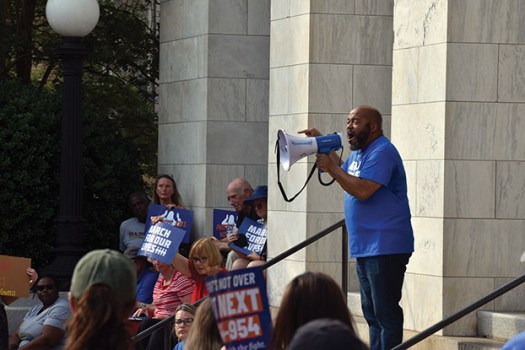 Salisbury City Council Member Anthony Smith speaks during the March For Our Lives protest in downtown Salisbury. More than a dozen people from various walks of life stood on the steps and advocated for gun law reform. Ben Stansell/Salisbury Post 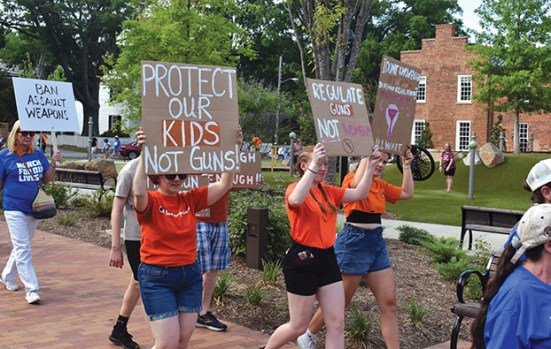 With children playing on the playground behind them, protestors marched through Bell Tower Green with signs asking for action from politicians to stop gun violence. Ben Stansell/Salisbury Post

SALISBURY — Holding a megaphone that amplified her quiet but determined voice, a 16-year-old student stood boldly on the steps of the Rowan County Administration Building and demanded action from legislators to stop gun violence.

“No child should have to go through that fear of being shot just because they went to school,” she said. “I grew up with that fear and I believe no other kid deserves it.”

More than 125 people gathered in downtown Salisbury on Sunday afternoon to participate in a March For Our Lives rally. A national initiative formed in response to school shootings, March For Our Lives is a movement “dedicated to promoting civic engagement, education, and direct action by youth to eliminate the epidemic of gun violence.”

Protesters carried signs and belted out chants like “enough is enough” while walking around Bell Tower Green Park. They marched down Main Street before reconvening in front of the Rowan County Administration Building for a string of impromptu, impassioned speeches.

“I knew that there was going to be a crowd of people that were going to be active for this,” said Alissa Redmond, owner of South Main Book Company and the driving force organizing the march in Salisbury. “I knew that we could demonstrate that there are many people here in Rowan County that feel that we need change on this issue and that we need to keep our schools safer for our children than they currently are.”

The demonstration mirrored hundreds of similar March For Our Lives protests held in cities and towns across the country over the weekend.

The marches come in the wake of two mass shootings that have rekindled the national debate on gun regulations. On May 14, a shooter killed 10 shoppers and injured several more during an attack in a supermarket in Buffalo. A little over a week later, a shooter killed 19 students and two teachers in an elementary school in Uvalde, Texas.

The recent tragedies, and the many mass shootings preceding them, were represented on signs and in speeches during the protest.

“We have got to stop this assault on America,” City Council Member Tamara Sheffield shouted, the end of her sentence drowned out by applause.

At 26 years old, Garrett Readling was a toddler when two perpetrators killed 13 people at Columbine High School. He was a junior in high school when a gunman killed 26 people at Sandy Hook Elementary School. Readling was in college at Western Carolina University when a 19-year-old murdered 17 people at Stoneman Douglas High School in Parkland, Florida — a watershed moment in Readling’s life.

“That jarred me into the game,” he said.

Readling, now president of the Young Democrats of Rowan-Cabarrus, helped promote the March For Our Lives in Salisbury on Sunday. He spoke during the event, too.

“Four years ago, Parkland happened — nothing has changed,” Readling said. “I think it’s about time that we demand better.”

Readling said he was both impressed and saddened to see people younger than him taking their turn on the megaphone.

“These kids are in school right now and it’s only getting worse,” he said. “They’re on the front lines. I don’t go to school every day. It gives me a lot of hope that they’re the ones who aren’t going to take it and will demand more, but it also sucks that they have to. They shouldn’t have to.”

Inspired by the students who spoke, Rena Taylor, a local teacher, made her own voice heard.

“If this continues, we will see our public schools crumble and we will see that loss of shared values that I believe is at the roots of all of these issues,” Taylor said.

Many of the people who spoke during the rally are Democrats, but Rowan County Democratic Party Chair Geoffrey Hoy said the issue transcends party lines.

Hours before the march wound through Salisbury, a bipartisan group of U.S. senators on Sunday morning announced an agreement on gun measures and school safety.

“I’m excited to see the fact that our elected officials are listening after this weekend,” Redmond said. “It’s not just us gathering here. There were over 450 gatherings over the country this weekend. I would hope that politicians don’t ignore our voices. We may live in a county that’s more one party or another, but I think we all share the value that our children should be able to attend a school without threat of violence.”

North Carolina’s Thom Tillis and Richard Burr were among the 20 senators, including 10 Republicans, who released a statement announcing the framework.

“Families are scared, and it is our duty to come together and get something done that will help restore their sense of safety and security in their communities,” the group said in a statement. “Our plan increases needed mental health resources, improves school safety and support for students, and helps ensure dangerous criminals and those who are adjudicated as mentally ill can’t purchase weapons. Most importantly, our plan saves lives while also protecting the constitutional rights of law-abiding Americans.”

The plan put forth includes penalties for those who buy guns for others who cannot, an investment in mental health services and funding for school safety resources. The agreement also included enhanced background checks for gun purchasers under the age of 21. The shooters in both the Buffalo and Uvalde killings were 18.

Before adjourning the march, Redmond encouraged people to register to vote and to contact their representatives to show their support for gun control reform.