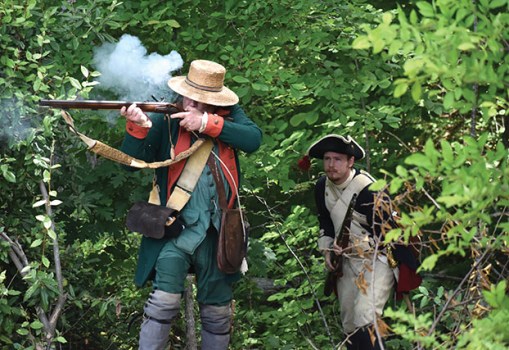 Battle reenactors come out firing from the woods near the Old Stone House. Ben Stansell/Salisbury Post 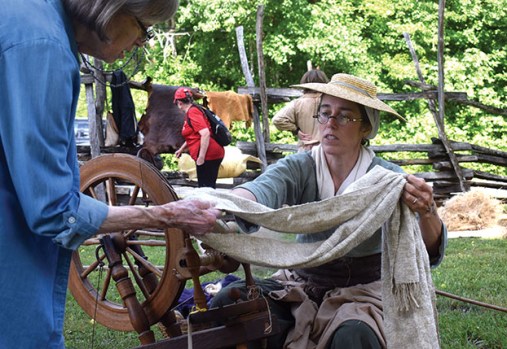 A fiber expert shows off fabric to a curious person at the Rowan Museum's Revolution in the Backcountry event held at the Old Stone House. Ben Stansell/Salisbury Post 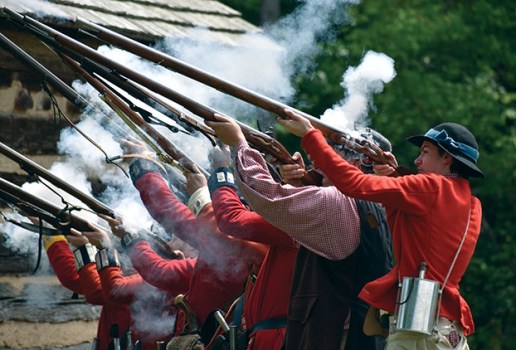 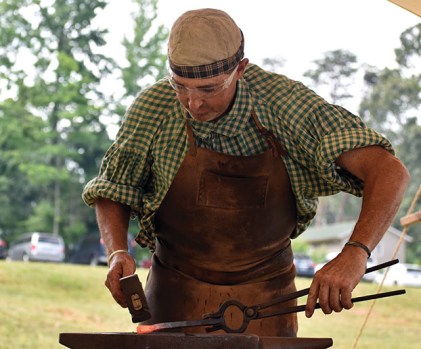 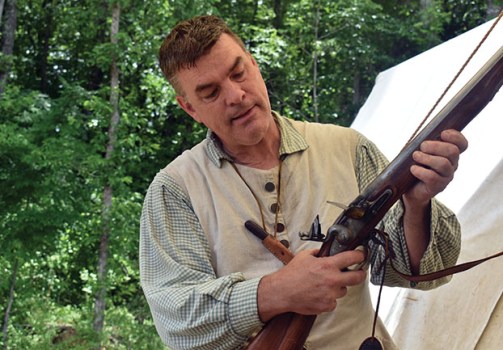 Jeff Dworek explains the mechanics of a musket that would've been used by soliders in the Revoluiontary War. Ben Stansell/Salisbury Post 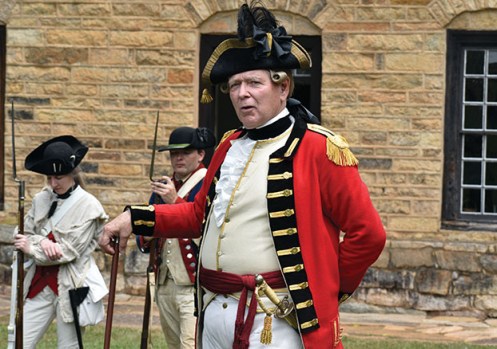 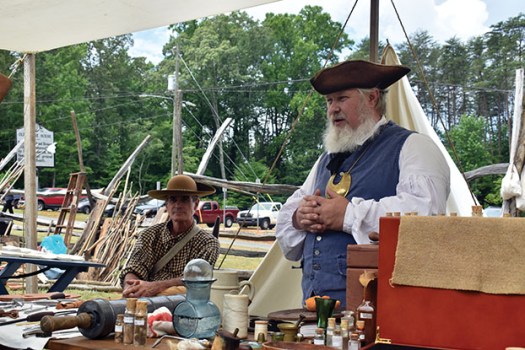 Bob Cooke explains the methods a surgeon herbalist would have used in the late 1700s to treat patients. In front of Cooke is a table filled with surgical instruments and medicines of the herbal variety. Ben Stansell/Salisbury Post 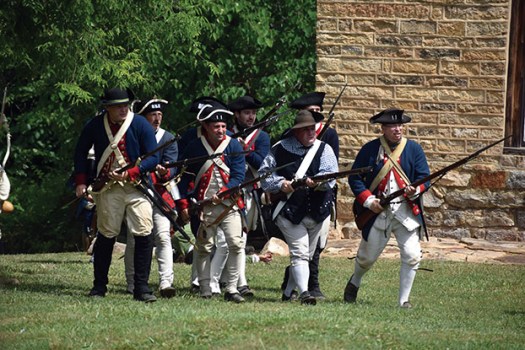 SALISBURY — Shots rang out at the Old Stone House as troops under the command of Gen. Nathanael Greene furiously fended off an attack from British soldiers fighting for Lord Charles Cornwallis.

When the musket smoke cleared and the skirmish died down, fallen soldiers strewn across the battlefield rose to their feet to embrace applause coming from spectators standing nearby.

Rowan Museum on Saturday hosted its second annual Revolution in the Backcountry event at the grounds of Rowan County’s oldest homestead, which was built by German immigrant Michael Braun in 1766. With live battle reenactments, the two-day event recognizes Rowan County’s role in the 1781 southern campaign of the Revolutionary War.

Revolution in the Backcountry will continue today starting at ​​11 a.m. with a battle reenactment planned for 1 p.m. The Old Stone House is located at 770 Old Stone House Rd.

Acting out the action were members of the Mecklenburg Militia, a group of women and men from around the Charlotte region who reenact a real militia unit that fought in the Revolutionary War. Other living history actors joined in as well.

The real fighting between Greene and Cornwallis didn’t take place on a hot June day or at the Old Stone House. It actually unfolded in February of 1781 and was part of what is now known as “The Race to the Dan,” a strategic retreat by Greene that, once he crossed the Dan River from North Carolina into Virginia, allowed the Continental Army to regroup and resupply.

But before Greene crossed the Dan River, he had to cross the Yadkin.

In his retreat, which started in Cowpens, South Carolina, Greene led his forces through Salisbury and to Trading Ford. Along the way, he dispatched contingents of troops to keep Cornwallis at bay.

“The battle scenarios today emulate what would’ve been the rear of Greene’s army and the front advancement of Cornwallis’,” said Matthew Waisner, captain and board chair of the Mecklenburg Militia. “There was no huge action that took place. It was little scraps here and there. Greene knew he could not afford a big fight at that point in time. So, orders were not to heavily engage.”

When Greene arrived at the Yadkin ahead of Cornwallis, traveling through the heart of Salisbury on his way, he deployed a deft tactic that paid dividends.

“What’s funny is Nathanael Greene kind of pulled a (George) Washington, per se,” Waisner said. “He commandeered every floating vessel within a mile’s reach and left Cornwallis with nothing basically.”

After Greene crossed the Yadkin, a timely flood caused the already fast-moving river to swell.

“If the Yadkin River had not flooded when it did, we may all still be British,” Rowan Museum Executive Direct Aaron Kepley told the crowd gathered to see the reenactment.

Stuck on the Rowan County side of the river, Cornwallis ordered his troops to shell Greene’s camp in frustration. It is said that enemy fire even struck Greene’s individual encampment, but did not hit the general himself.

Not long after Greene crossed the Dan River and regrouped with his troops, he returned to North Carolina and won a pivotal victory against Cornwallis at the Battle of Guilford Courthouse — a climactic moment in the war.

There were two battle reenactments on Saturday, one at 11 a.m and the other at 2 p.m. In between the action, there were artillery demonstrations, firing demos and even a meeting between actors playing Greene and Cornwallis in front of the Old Stone House.

Around the battlefield, merchants sold their wares and living history actors demonstrated various activities. Standing over a smoldering fire, James Ruggiero demonstrated blacksmithing techniques used in the 18th century. In another tent, actors chopped cucumbers, onions and watermelon in preparation for a large meal for the soldiers. One tent was filled with historically reproduced glass made by Phil Gilson of Lawrenceville, Virginia.

Keith and Lauren Childers, who live in south Rowan, stood with their son in the tent occupied by Bob Cooke, a surgeon herbalist living history actor who taught them about the treatments doctors would have used in the 1700s.

Keith said he was glad his son could learn history that he might not have otherwise been taught.

The turnout for Revolution in the Backcountry on Saturday was larger than last year.

“It’s awesome that this many people have come out and are having such a good time and are eager to learn about one of the most pivotal periods in American history and the role Rowan County played in it,” Kepley said.

After two successful years, Kepley said Rowan Museum will continue to host Revolution in the Backcountry each year.

“It’s going to grow over time,” Kepley said. “This time is bigger than last time and next year, as word gets out about it even more, people will figure out that this is a place to come and do something fun.”