SALISBURY —  For the first time in 30 years, blackberries are back on the menu at Elium Farm.

Of course, there’s much more than just some of the sweetest blackberries in Rowan County that visitors can find when they visit the farm at 2085 Lake Road.

For once in decades, however, the blackberries take center stage. 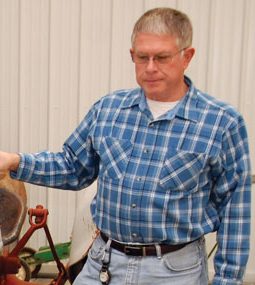 Randy Elium, who owns and operates the farm along with his wife, Pam, first planted the current crop of blackberries two years ago. After two years of closely monitoring and taking care of the plants, the blackberries are ready to eat and visitors are invited to come out and pick their own.

For those who looking for some variety in their produce selections, the farm also grows everything from okra and potatoes to cucumbers and strawberries (although their season is coming to a close) along with much more.

Despite a relatively dry spring, Elium was prepared to help all of his crops thrive with a “precision watering” approach that includes lines he put out to directly water the ground underneath each crop. That also helps to eliminate waste as 28,000 gallons of water gets pumped into the plants each day through Elium’s drip system, keeping the soil and crops healthy regardless of the weather.

Speaking of the soil, the sandy loam at the surface of the land on Elium Farm with its textured, red dirt beneath makes for perfect growing conditions for all kinds of different crops.

Elium has taken painstaking efforts to ensure that he collects mulch from a variety of sources to better fertilize the crops as well, allowing for everything to thrive in these conditions.

For those interested in doing more shopping than picking, there’s a store at the front of the farm where assorted produce and other items can be purchased fresh Monday and Friday from 1:30-5 p.m. and from 10 a.m. to 2 p.m. on Saturday.

Sweet corn and tomatoes will be available on the farm and at the store soon as well with their seasons beginning later into the summer while honey is another popular item for customers. The farm is home to a beekeeping site where the product is collected straight from the source.

Visitors to Elium Farm this year may notice some changes as part of more than 60 acres the property sits on is being converted into space for more crops and hay in the coming months and years. Elium also is excited about the chance to carve out a pond with a waterfall in a nearby gully as well.

While the Eliums have been on the farm since 1978 and Randy’s family lived on a portion of it for years prior, the farm is still full of new things to do and activities to host, keeping the Eliums and guests alike busy.

In the coming months, the property plans to have classes on agriculture on-site and the emergence of a late-summer sweet potato harvest among other things.

For now, however, the focus is on blackberries. After 30 years, they’ve returned to Elium Farm and they’re just as sweet and fresh as ever.

More information on Elium Farm can be found on Facebook @EliumFarm or via email at eliumpam@gmail.com.