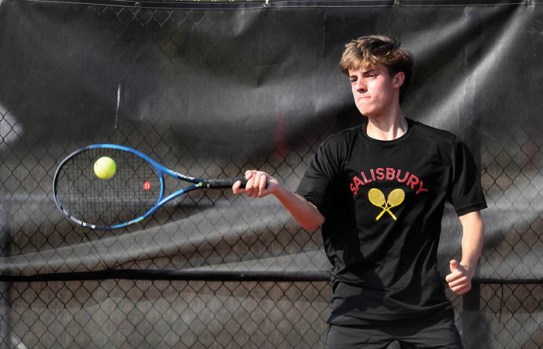 Salisbury's Will Koontz shares Player of the Year honors with South Rowan's Joey Caraccio. File photo by Wayne Hinshaw, for the Salisbury Post 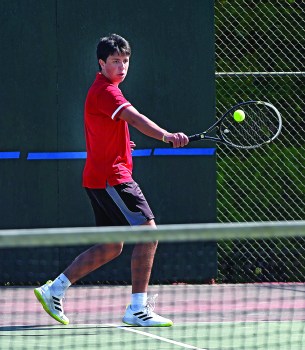 South Rowan's Joey Caraccio shares Player of the Year honors with Salisbury's Will Koontz. File photo by Wayne Hinshaw, for the Salisbury Post

As seniors, with South moving up to the 3A ranks, they never got to face off, but both of them beat just about everyone else they encountered.

They had remarkably similar seasons. Both overcame injuries. Both wrapped up their careers where you want to wrap up your career — in the state tournament.

Both seniors led exceptional teams. Salisbury won another CCC title and reached the third round of the state playoffs. South had an earth-shaking season for a school not known for tennis. The Raiders went 12-2 in the South Piedmont Conference.

Caraccio and Koontz are again honored as Rowan County Player of the Year for boys tennis. That award was split three ways last season, with East Rowan’s Landon Shuping also in the mix.

“Will had to overcome a lot this year, but he was even better than he was as a junior,” Salisbury coach Milt Griffith said. “More consistent, more patient, and an even better leader. If I needed Will to go hit with our  No. 5 or No. 6 guys, to try to make our team better, then Will gladly did that. With Will, it was never about Will. It was always about Salisbury.”

It’s true. Koontz probably enjoyed going to The Cheesecake Factory with his teammates more than he did any of his singles victories.

Koontz began his senior season flat on his back with a case of mono. Medical folks thought he might miss a month, but he only missed three matches.

“When I was out, the team picked me up and kept right on winning,” Koontz said. “When I got back, I won by first match pretty easily at Thomasville, but the next one against West Davidson was a challenge. I lost the first set 6-2 and I was having a hard time breathing. But I was able to come back. I won the second set, then won the third-set tiebreaker.”

Next came a pulled stomach muscle. Koontz was forced to serve underhand for a while.

But he kept winning. Icepacks finally healed the muscle and allowed him to have a big finish to his season and his high school career.

“When you look at what we accomplished with several first-year guys, it was pretty awesome,” Koontz said. “I think I was more consistent this year, definitely made fewer big mistakes. I think I fought back better in the matches where I did get down. For sort of an injury prone year, it was still a very good year.”

Koontz’s only singles loss in dual team matches came in the playoff setback against Lincoln Charter.

Conference champion and regional runner-up,  Koontz also won one match in the 2A state tournament.

Koontz will be missed by the Hornets.

“Will’s got confidence in himself, but he also had this wonderful humbleness about him,” Griffith said. “He’s not one of those kids who is walking around believing he’s good. He realized how hard he had to work to be good, and he put the work in all year to be as good as he was.”

Like the Hornets, South Rowan tennis also gave it all it had.

The Raiders probably fielded the best boys tennis team in school history. With a core group of seniors, this was a team that could have won some 3A leagues this season. South’s new conference, unfortunately, included a powerful Lake Norman Charter squad that was one of the best in 3A. South beat everyone else in the league twice and finished second.

“I will say that I believe our team this year would have won the league we played in last year,” South coach Frank Caraccio said. “We were strong.”

The nucleus of the South team was made up of guys for whom baseball dreams didn’t work out, but they found a different athletic path to success.

“Just a great group of guys who loved to practice, loved to play tennis, loved to compete and wanted to get better,” Coach Caraccio said. “I couldn’t be prouder of what they accomplished.”

“Richard Gould, our No. 3, came back and won a great match, and I believe that’s the only conference match Lake Norman Charter didn’t win all season,” Coach Caraccio said. “For 8-1, it was very competitive. We showed up. I loved how we competed, and playing against a team like Lake Norman Charter really helped us.”

His season was in jeopardy early on.

“Joey was in a car accident and slammed his shoulder pretty good,” Coach Caraccio said. “He aggravated an old baseball injury and needed physical therapy. He didn’t have the serve he had as a junior because of his shoulder.”

Talk to anyone about Caraccio, and the first thing they talk about is his lethal serve. With that taken away, he had to find other ways to score points, but he did.

He used his legs more and used his head more. He adjusted. That’s what the good players do.

“There was also some adjustment going up from 2A to 3A,” Joey said. “3A was somewhat more difficult during the regular season, but where the difference really showed up was in the state tournament. Everyone in 3A that makes state is just super-solid. It was an eye-opener when the No. 1 kid from Lake Norman Charter lost to a No. 4 seed in the first round. That’s how tough 3A is at the state level.”

Joey had a terrific regular season.  He beat outstanding players, such as Northwest Cabarrus’ Jacob Rinker. He beat some good players 6-0, 6-0.

He was conference runner-up and regional runner-up. At the state tournament, he lost 6-4, 6-1 in the first round to a talented South Point player, but he was there, and that first set was a dogfight.

“His serve was just starting to come around by state,” Coach Caraccio said. “That’s the first time all season he was really able to let it go.”

Participating in the dual team state playoffs for the first time since 1985, South lost an epic 5-4 road match to Atkins in Winston-Salem.

Joey’s match was one for the books. He lost the first set, but rallied. He won the third-set tiebreaker 10-8.

Gould won an equally tight match at No. 3 singles.

The match boiled down to a couple of points at No. 5 singles. South didn’t get them, but the Raiders were oh-so-close to their first ever win in the dual team playoffs.

Joey was 21-5 for the season at No. 1 singles and doubles. Frank and Joey are both amazed by how far he came.

“No. I didn’t seen anything like that happening when I picked up tennis pretty late, but I got the bug, and then I started playing all the time,” Joey said. “Really, all of us did. I think that’s why we had such a killer team.”

And they had a dedicated coach. Frank Caraccio was voted South Piedmont Conference Coach of the Year by his peers.

A native of upstate New York, he’s a businessman, not a schoolteacher.

His enterprise — the cleverly named “Not Just Franks” — in downtown Concord, offers three for $5 hot dogs, as well as specialty items such as pretzels that appear to be the size of tennis rackets.

The story of the Caraccios isn’t over by a long shot.

Freshman Bella Caraccio played No. 1 for South’s girls team back in the fall and appears to have a bright future.

“She’s got some ability, but it’s really up to her,” Frank said. “Does she want to practice tennis as hard as Joey practiced? We’ll have to see how it goes.”

The next stop for Joey Caraccio is UNC Wilmington, while Koontz heads to UNC.

Both have caught the tennis bug for life. Both hope to play club tennis in college.

Maybe next season, they’ll be squaring off one more time.