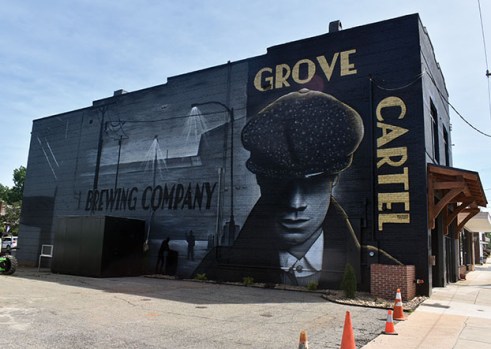 The mural created by the artist known as Abstract Dissent on the side of Grove Cartel Brewing Company. Ben Stansell/Salisbury Post 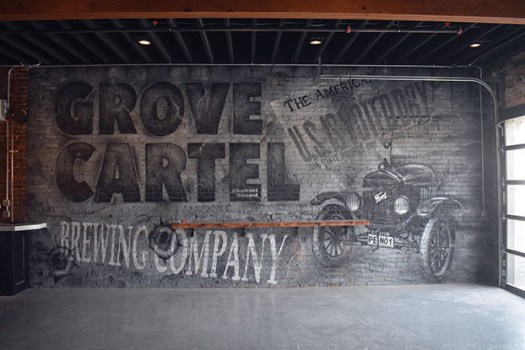 The massive mural on the outside of the building has a smaller counterpart in the brewery's taproom. Ben Stansell/Salisbury Post 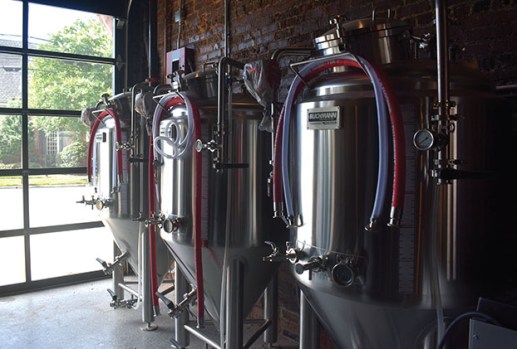 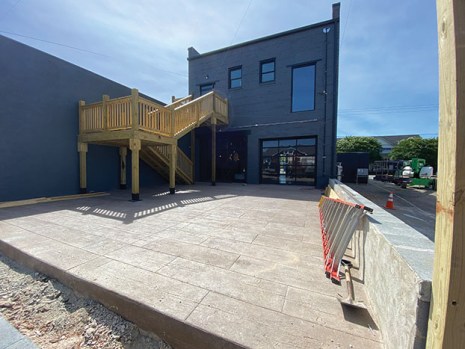 The back patio at Grove Cartel. Ben Stansell/Salisbury Post

CHINA GROVE — The colossal new mural in downtown China Grove will remain — words and all.

The owners of Grove Cartel Brewing Company and China Grove town leadership came together last week to find a resolution that will allow the expansive aerosol artwork on the side of 211 N. Main St. to stay put.

Jason Overcash and Jonathan Woodward have been working to open the brewery and restaurant concept. The name and theme of Grove Cartel is inspired by Overcash’s law enforcement career.

The duo commissioned local artist Shane Pierce, known as Abstract Dissent, to create a massive mural on the building’s outer wall. Pierce started on the mural earlier in the week, using a lift to paint the upper reaches of the wall. At 80 feet long and 38 feet tall, the mural will likely be Pierce’s biggest yet.

The primary focal point of the design is a 1920s style gangster, his face shaded by a flat cap. The figure is bordered on the top and right side by the words “Grove Cartel” in gold lettering. It was the words, not the gangster or the rest of the mural, that drew attention from the town.

According to China Grove’s current unified development ordinance, murals cannot contain lettering. After hearing that the mural was in violation of the ordinance, Overcash took to social media to explain the problem.

“We experienced a lot of outpouring of support,” Overcash said. “The amount of text messages, emails, phone calls — it was overwhelming.”

Later that day, several council members reached out to Overcash to talk through the problem. On Thursday, Overcash and Woodward met with Mayor Charles Seaford, Council Member Rodney Phillips and Town Manager Ken Deal to develop a solution.

It didn’t take long for the council to decide to alter the ordinance to allow lettering on murals, as long as it’s the businesses’ name.

“We don’t want to be a stumbling block to keep them from being successful and it looked very good, it was professionally done and it added to the town,” Deal said.

Overcash is appreciative of the council’s support and described the decision as “a win for our small town.”

“We’re on the verge of bringing something to China Grove and making it as nice as it possibly can be and helping the city be at the forefront of growth and expansion,” he said.

The duo is planning to announce an opening date for the first floor taproom soon, but Overcash said the opening of the second floor restaurant will be delayed while they wait on equipment to arrive. While plans to open the rooftop to customers have also been put on hold, the outside patio will be open to taproom guests.

More information about Grove Cartel can be found on the brewery’s Facebook page.