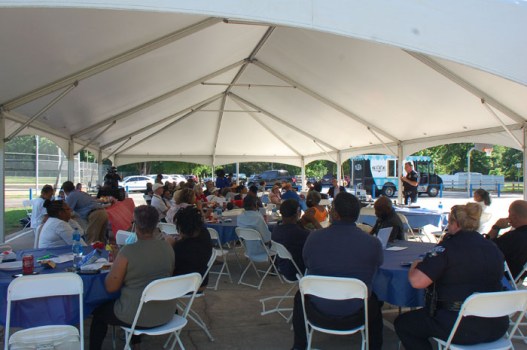 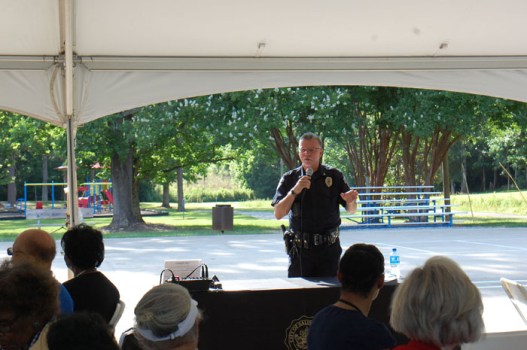 Police Chief Jerome Stokes addresses West End residents who attended the first of at least four 'Cultivating Community Conversations' planned around the city, designed to allow police and residents to get to know one another. Elisabeth Strillacci/Salisbury Post

SALISBURY — About 50 residents joined members of the Salisbury police and city government Thursday night in the first of at least four Cultivating Community Conversations, an effort at building communication between police and the residents they serve.

The event was held at Kelsey Scott Park and food, drink and even ice cream was available from the police Neighborhood Ice Cream Express (NICE) truck.

Police Chief Jerry Stokes said the goal of the meetings is to begin to rebuild the relationship between the community and police that lost a bit of ground during COVID.

“We have been working on community policing for years,” he said, “but COVID got in the way of face to face meetings, so we are working to restore that.”

In addition, he noted that residents in the West End have been “frustrated in the past because they’ve thought of the police as providers of short-term solutions- they come in, address an issue and are out. We are looking instead at long-term solutions and we want the community to know that.”

The planned conversations are parallel to another initiative the city has begun, both working toward the same goal of learning what the community believes it needs and then coming up with ways to provide it. The second project began Tuesday with West End surveys, and Jason Walker, from IDEA Analytics, who helped create the survey questions, attended Thursday’s meeting to make sure residents understood the purpose of both the surveys and the meeting.

“People want answers,” he said. “We want to help show that the city, and all of its departments, are listening.”

Walker called the efforts the city is making “heartwarming,” and said he “never expected that a small town in the south, in North Carolina, would be leading the way on what needs to be done.”

Rev. Roy Dennis, minister of Gethsemane Mission Baptist Church and the Chairman of the Police Advisory Board, encouraged those in attendance to “talk to these officers, tell them what you think is going on. This is a safe, open space to communicate.”

Dennis and Stokes pointed out that compared to last year this time, violent crime in the city is down 20 percent, and there are efforts to keep numbers low, but other crimes are not dropping off.

“Right now we have a lot of motor vehicle thefts,” he said. “Windows are not being smashed. People are leaving their doors unlocked, their keys in the car, and even if the car itself is not stolen, items inside are. There are five firearms a month being stolen from cars. A motor vehicle is not a gun safe. Lock your guns up securely and lock your cars.”

Stokes said he knows some in the community still don’t always understand why police do what they do sometimes.

“This is your chance to ask officers why they do things, to ask them to explain processes to you,” he said.

Anne Little, director of Diversity, Equity and Inclusion for the city, guided the conversation, saying these meetings “mean something to me because I live here, too. We all have more in common than we want to believe. This is an opportunity for you to get real, detailed information.”

Deborah Wilson, who has been a West End resident most of her life, said even if she wins the lottery, she is not moving. She said she attended Thursday’s meeting “to meet some of the police officers and to meet some of my neighbors. When I grew up, everyone in the neighborhood knew each other, but not any more.”

Several speakers pointed out activities currently available for children and made note of things they believe would be beneficial to the community, but one resident, Melissa D., who did not want to give her last name, worrying about possible repercussions, brought the conversation back to police and neighborhood relationships.

“What are we going to do to make us more comfortable with our officers,” she asked. “Because right now, people on the West Side don’t really feel like police always care about us.” She said she’d had a less than ideal response from police when her car was hit in her front yard, and she sees officers drive by without stopping. “They need to get out of the car and walk the streets, interact with us, let people know they are paying attention, that they care. We need to develop ways to make everyone comfortable, not just you.”

Little thanked the mother of three young boys for her comments, noting that it is important to understand why Melissa feels the way she does “so we can work on what we need to work on. Comments like this are important, because if we don’t know, we can’t do anything about it.”

Linda Hunt pointed out that being Black and male is still a scary thing, that parents are having to teach children how to behave if they are stopped by police, and are taught that the goal is “for them to make it home alive. Officers need to understand that is the reality of being a Black man in America right now.”

Little agreed that a big part of the issue is lack of communication, not just between police and residents but between the city as a whole.

But some residents, like Darlene Griffin, praised officers for the help they have given her family.

“I am extremely grateful for several officers, for the help and the care they have given our family,” she said. “They have become a part of our family.”

City Manager Jim Greene and Mayor Karen Alexander both attended the  conversation, and both noted that lines of communication are open.

“You’ve shared many specifics tonight that we can actually begin to address,” said Alexander. “And that’s what we need. To know what your concerns are, what your needs are, and how we can help ongoing.”