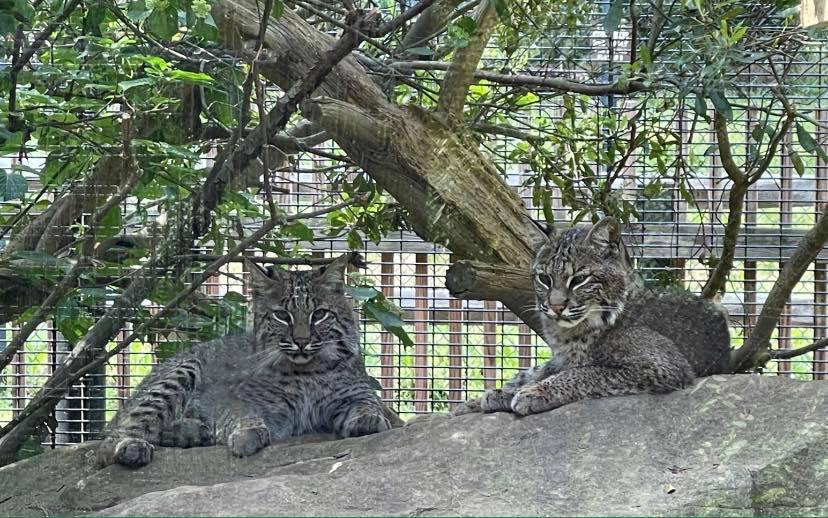 Rowan Wild took in a pair of young bobcat siblings in April. The two are spayed and neutered and have been settling in to the enclosure and Rowan Wild is running a naming contest for them right now.

You can vote in the contest online between three iconic sibling names picked by park staff.

Rowan Wild naturalist Megan Cline said the cats are a year old and were captive bred in another facility.

Cline said the cats are out in the open and active enough visitors can expect to see them out and about in their enclosure.

Bobcats are a medium-size feline widespread throughout much of North Carolina and North America. The pair moved into the enclosure for the facility’s last bobcat named Bud. He died in March 2021 due to complications of kidney disease and lived at the park since 2009. Cline said bobcats can live into their teenage years and even reach close to 20 years old.

The staff improved the enclosure while it was vacant. There are new platforms and a bridge that runs across the top.

“You can see them jump on the rocks and run across the bridge,” Cline said, adding they are not afraid of visitors.

“It’s safer for the cats and for the keepers,” Cline said.

A more bittersweet loss was the release its family of four red wolves housed at the facility in March. The family is part of a species survival plan for the critically endangered canines and they were tapped to be released to bolster the wild population.

Cline said the facility plans to bring new animals into those enclosures, but renovations are easier without any residents.

The facility still houses a raccoon named Roxy, who has neurological issues, in a separate enclosure.