Millbridge Elementary yoga club is an outlet for students 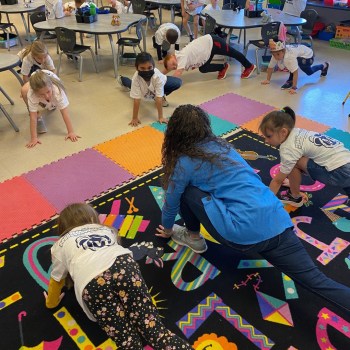 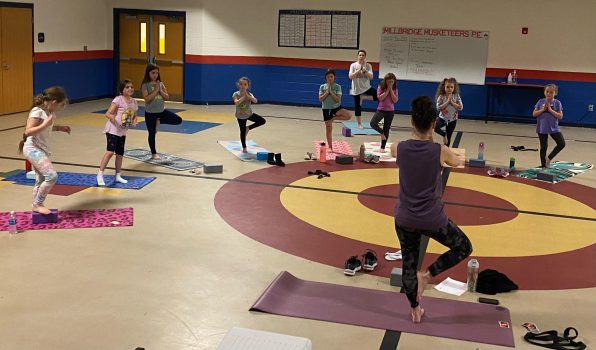 Submitted photo - There is a yoga club at Millbridge open to third graders.

CHINA GROVE — Christa Graff saw students in her school feeling the pressure of the pandemic, so she decided to add some COVID-safe decompression to the day.

She saw the social and emotional scores in student surveys dropping in areas like self-regulation, so she decided to start doing some yoga exercises with Millbridge Elementary School’s kindergartners.

“Especially with kindergarten, I was concerned about them coming down and not being able to touch them and calm them down,” Graff said. “Kindergartners are naturally nervous and upset. Sometimes they have separation anxiety.”

Graff, a school counselor, taught kindergartners some breathing and balance exercises. She decided she wanted to do more and started a yoga club this school year. She already runs an after-school running club and opted to create a dedicated third grade yoga club that attracted 22 students.

“With the third graders it’s more of a typical yoga class,” Graff said. “It starts out with just some deep breathing and trying to release from the day. Then you move into warmups with the body, with different poses and then you get into what’s called yoga flow. The kids do better where the movement is more of a flow and you’re not in one pose for too long. Then we go into strength and balance poses. It tests their coordination and it’s all about finding one spot to focus on.”

Graff said the kindergartners get most excited about the balance exercises and create sound effects to go along with them, but the third graders are a bit more calm. The club sessions wrap up with more grounding and breathing exercises.

“You feel your muscles relax after the hard work,” Graff said.

She has seen the benefits in students and gets updates from teachers when they use a pose to help calm themselves down.

Rylee Miller just finished third grade and she was in the club. She said when she heard about it, she was having some problems with stress at school, but the club has helped her decompress.

She had never done yoga before and she was a bit skeptical at first, but it helped her clear her mind and now she loves it. Her favorite part of the sessions is lying down on the mats for a few minutes after all the exercises and listening to nature sounds.

“I would love to keep doing yoga,” Miller said.

She also enjoys cheerleading and tumbling. She works yoga into her warmups now.

Cyndi Miller, Rylee’s mom, said she has seen the club help Rylee adopt a good mindset and she hopes the school does even more with the club than meeting a few times a month.

“I would even pay for more,” she said.