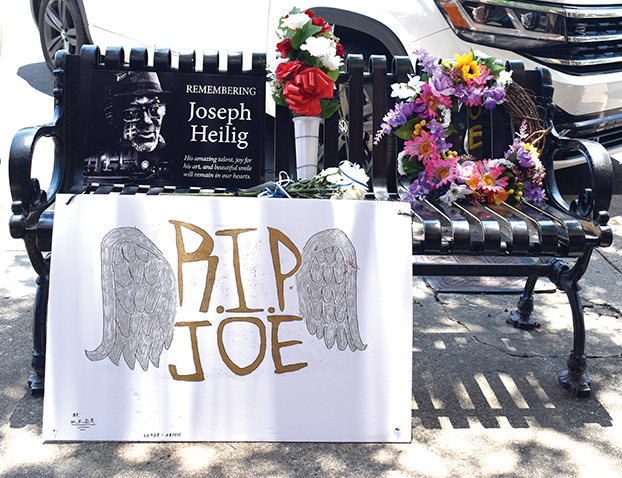 In the days since Joe Heilig's passing, the bench where he completed most of his artwork has been covered in memorials. Ben Stansell/Salisbury Post

SALISBURY — For close to a decade, Joseph Heilig created lively conversation and exceptional artwork on a sidewalk bench outside of Fullers Market/Ultimate Sports Apparel in downtown Salisbury.

In the wake of Heilig’s untimely passing late last month, the city is planning to permanently honor the street artist and downtown staple by placing a memorial plaque on the bench he made his own. The lasting tribute will be made in the same spirit of the flowers, posters and other temporary memorials that people have placed on the bench since Heilig’s death.

During a meeting on Tuesday night, Mayor Pro Tem Tamara Sheffield said the city has received multiple requests from residents for the city to honor Heilig in an enduring way. The city has a process through which individuals can request for a memorial plaque to be established and Sheffield said the necessary request has been placed.

The council established a 30-day public input period before placing the plaque. Input can be submitted to Salisbury City Clerk Kelly Baker at kbake@salisburync.gov.

“He will be terribly missed by most folks who had any contact with him,” Sheffield said. “I’m glad we have good citizens who pay attention to those kinds of things to honor Joe’s memory and his forever place on that bench.”

Council Member David Post mentioned that there is a GoFundMe raising money to cover the cost of Heilig’s funeral. Post also said he’d like the town to explore the idea of commissioning a small sculpture of Heilig sitting on the bench. Mayor Karen Alexander said she thought the sculpture is a good suggestion, but council agreed to focus on the plaque for now.

Baker said the city is still developing the concept for the plaque.