SALISBURY — City Council on Tuesday night approved moving forward with the development of an in-house microtransit pilot program that will provide on-demand transportation services to some Salisbury Transit users.

The program will work similarly to rideshare services such Uber or Lyft, but with Salisbury Transit vehicles and operators.

“I think (users) will really enjoy it because they can have more control over their transportation needs,” Transit Director Rodney Harrison said. “They can schedule a trip whenever they want to. They don’t have to go to a stop and wait. They can look at their phone and schedule a trip and in about 20 minutes a vehicle will be there, so it’s a more responsive service.”

Harrison said microtransit should be more efficient than the current fixed-route method because it will employ dynamic routing.

“Dynamic routing should tell you where to go quicker, faster and tell you who to pick up,” Harrison said.

The pilot microtransit program will replace route three (blue), which encompasses parts of Salisbury, East Spencer and Spencer and includes stops at the VA Medical Center, Novant Health Rowan Medical Centers and the North Carolina Transportation Museum. Over the past 11 months, route three has recorded approximately 24,827 trips. One trip is when a single person enters a transit vehicle for a ride.

People located within approximately a quarter mile of route three will be eligible for the microtransit pilot program. ADA Paratransit riders can be picked up further outside of that area. 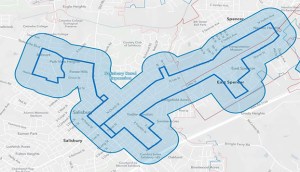 The pilot program will use a Software-As-A-Service (SAAS) model in which the city will lease software but carry out the service with its own operators and vehicles. During the council meeting, Harrison assured Council Member David Post that Salisbury Transit has the vehicles and staff to execute the program. Using the SAAS model, Harrison said, will allow the city to address demand quickly. Anticipating demand for the microtransit service is difficult to do since it’s a new program to Salisbury, he added.

The pilot program, Harrison said, will give the city a better idea if committing to the program longterm is worthwhile.

“It would also collect pilot performance data and with that data we will provide council with results at the next goal setting retreat,” Harrison said.

With council approval, the goal is now to launch the pilot program in December.

The grant would require no local match and will likely be awarded in the fall with an expected start date of July 2023. If the city receives the grant funding, the microtransit program would be expanded to include three additional rural service areas. The funding from the U.S. Department of Transportation would likely be for three years.

Salisbury received a total of $818,771.50 from the settlement. Council approved spending the remaining $130,473 will be used for upgrading Salisbury Transit’s facility at 300 W. Franklin St. to support the charging stations. Harrison said the all-electric vehicles will charge there overnight.

The new vehicles can be used to provide microtransit services in-house, leased to a third-party provider to operate the microtransit program or support fixed routes and ADA Paratransit service. Harrison said the plan is to order the vehicles as soon as possible because delivery time could be between 8 to 12 months.